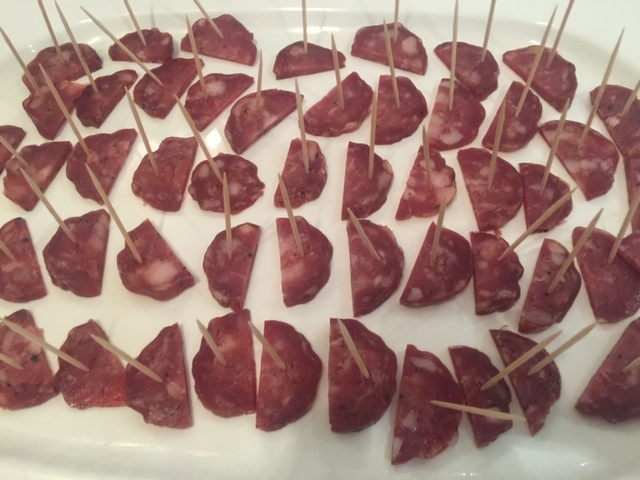 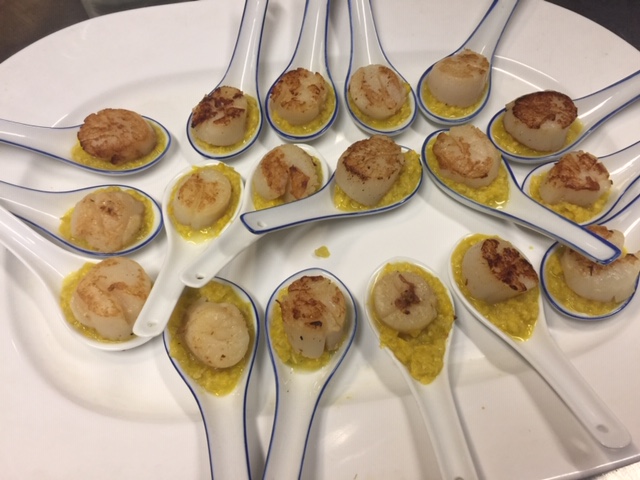 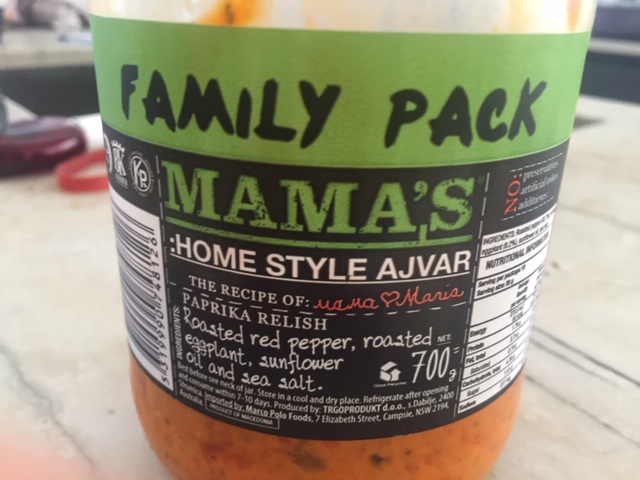 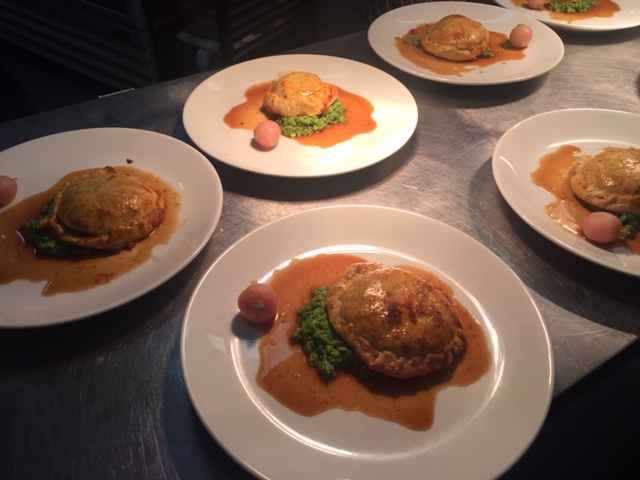 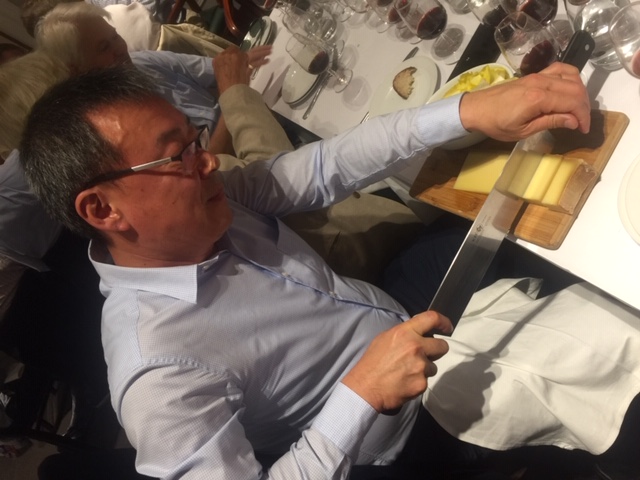 Some 52 members and guests attended this cook-off number 3 by our frequent flyer Chef of the Day, James Hill. The two words ‘duck pie’ may explain the popularity. James was assisted in the kitchen by our Foodmaster, Bill Alexiou-Hucker, and assisted on the canapés by Nick Reynolds.

Canapés. Not mucking around with two canapés, there were three starters today. First off were Queensland scallops on a purée of sweet corn, golden shallots, garlic, butter and wine. The comments around the room were very positive, especially about the texture of the scallops being ‘just cooked’. Next up was a simple ‘salami on a stick’ which fully describes this very tasty piece of cured sausage. Origin unknown. The third involved Iggy’s bread as is so often the case with James. Amazing bread. Today it was a capsicum (sort of) paste, called Ajvar. More of a relish, but with full and spicy flavours. From Google, for our education:

Ajvar is made of roasted or cooked peppers. Depending on the capsaicin content in bell peppers and the amount of added chili peppers, it can be sweet (traditional), piquant (the most common), or very hot (ljutenica). Ajvar can be consumed as a bread spread or as a side dish. There are a few variations of ajvar. If it contains tomato, then it is called pindjur or if it contains eggplant is called malidzano.

Main Course. Finally, a break from seafood. The duck ragu that James used as the heart of his pies was based on a Terry Durack recipe. The ragu filling had the usual carrots, onions, spices et cetera et cetera. The 50+ pies were handmade on the morning of this lunch and were served on a base of green pea purée with poached radishes on the side. The appearance of the dish was pleasing and defined simplicity. The ragu had a depth of flavour reflecting the long cooking time with vegetables and other ingredients. The jus was the icing on the cake.

The comment of the day was ‘chips would have made it better’!

Vasse Felix Filius Cab Merlot 2013 (not tasted for this review)

Given the large numbers at the lunch, no two tables had the same suite of wines and so the five listed above were some of the more common shared amongst tables.

The Allegrini wine was really a Valpolicella but not legally. It had a touch of Sangiovese thrown in with the usual Corvina and Rondinella which made it a “non-complying” wine of the area and hence an Indicazione Geografica Tipica or IGT. By no means is that a reason to think second rate. Some of Italy’s best wines are IGT’s. At 8 years of age, it was a medium-bodied style with a light fruitiness as befits Valpolicella. The wine has probably started down the incline and would have been better a couple of years ago, but still very enjoyable.

The 2015 Barbera was in wonderful shape. Behind the worship associated with Nebbiolo from Piedmont, Barbera runs number two in red varieties. Mauro is a very good maker and this wine was lean, aromatic with intensive flavours. A very good wine from a very good year.

Possibly the best wine of the day, which was shared by all tables, was the Craggy Range Syrah 2008. This Gimblett Gravels wine whilst not a skinny weakling was highly refined with length and power followed up with a white pepper character. This is one of New Zealand’s best wines and you can see why.

Whilst I did not taste the Vasse Felix or the and Anna Gros wines, I would imagine that the Minervois would have been the better of the two having had it on many occasions.

James Healey had selected a Rhône Alpes cheese for us today, a Beaufort, the producer being Thones. This cheese lit up the faces of all around the room and whilst our suppliers apparently under delivered the quantity, there was sufficient of this beautiful cow’s milk cheese to go around. James commented that as it was lighter in colour and hence probably the winter version of the cheese. The price of Beaufort is in the very top echelon of imported cheese into Australia and you can see why.

A simple salad accompanied the cheese and as usual, bought comments about salad being served at all. Tradition lads!

Spencer Ferrier today served us Monsoon Malabar Arabica coffee and explained the background to its name. We have had this coffee before but not for some time. It is very full flavoured and ideal for those of us who only drink coffee sans dairy.

James summed up his meal and the cooking part of the day and thanked Leo and Bill for their let’s get into this job attitude. He also thanks Nick for the meticulous work in preparing three canapés for over 50 people.