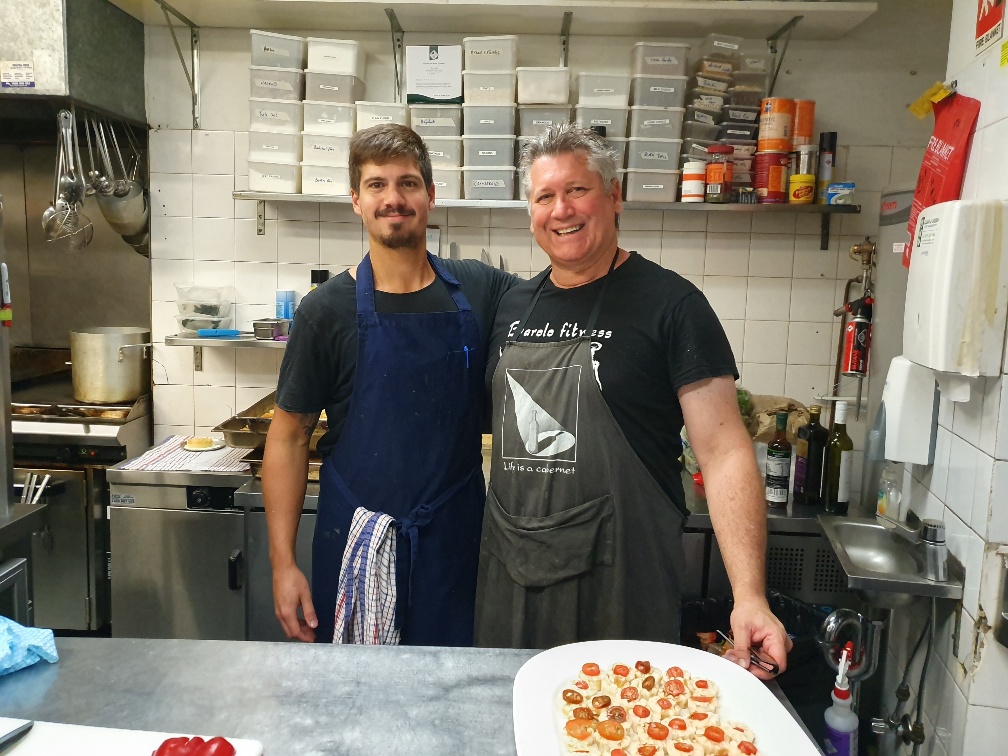 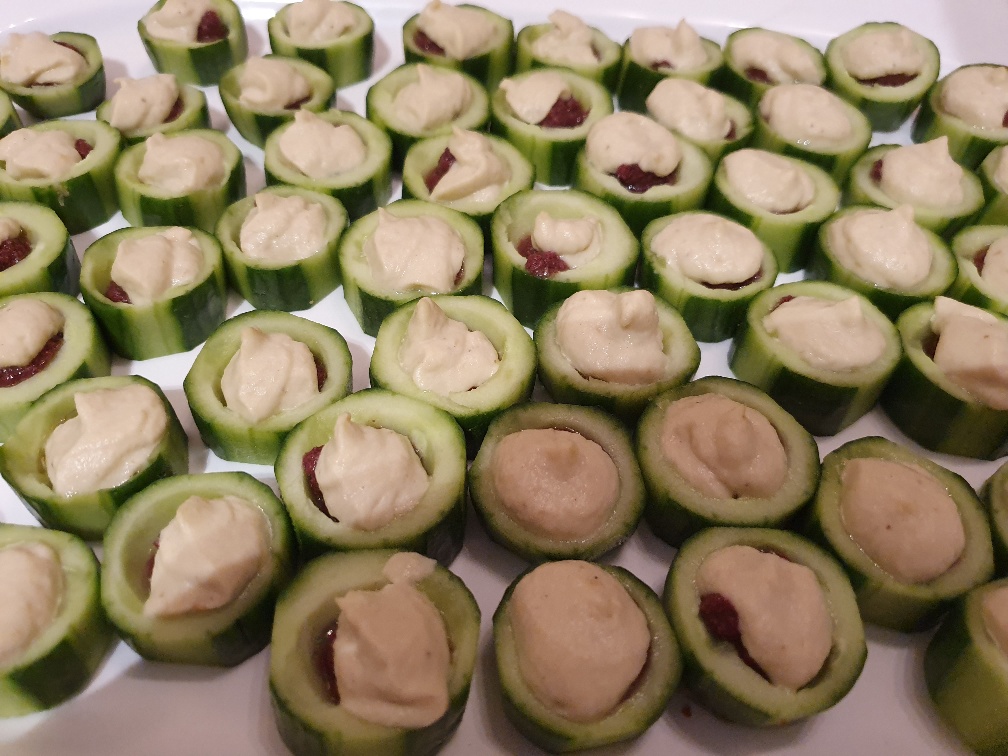 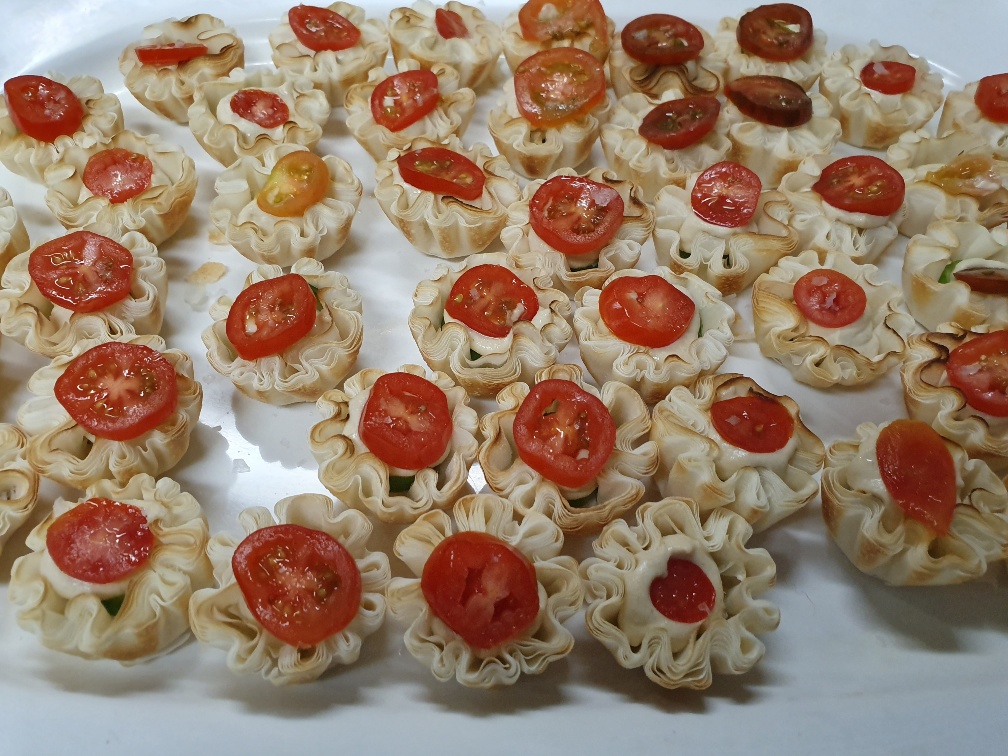 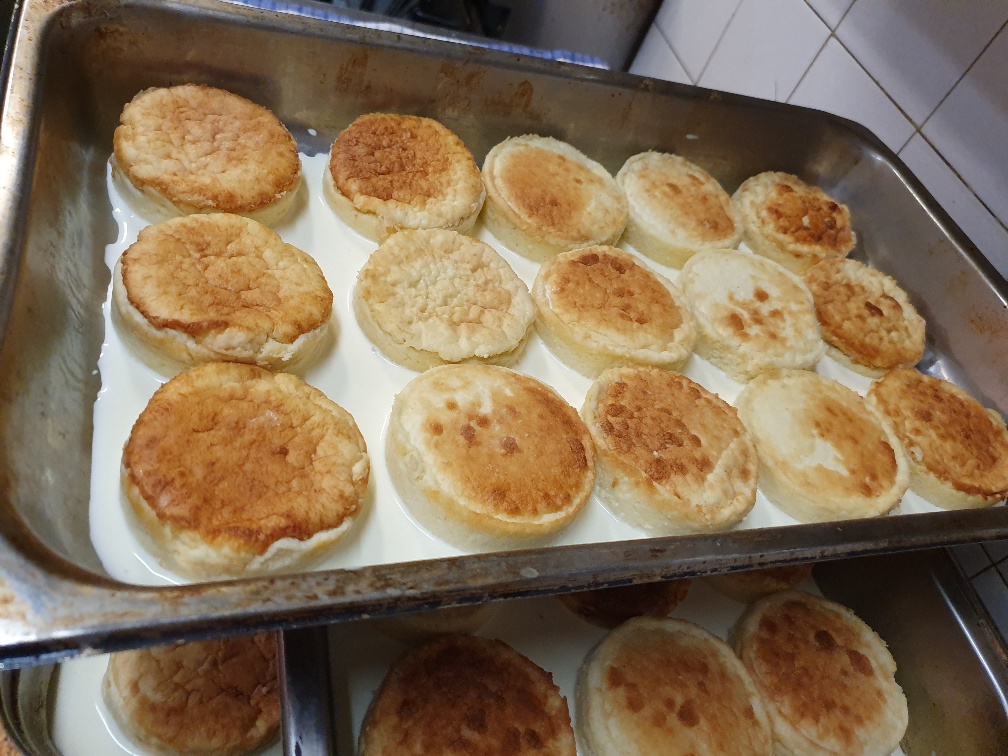 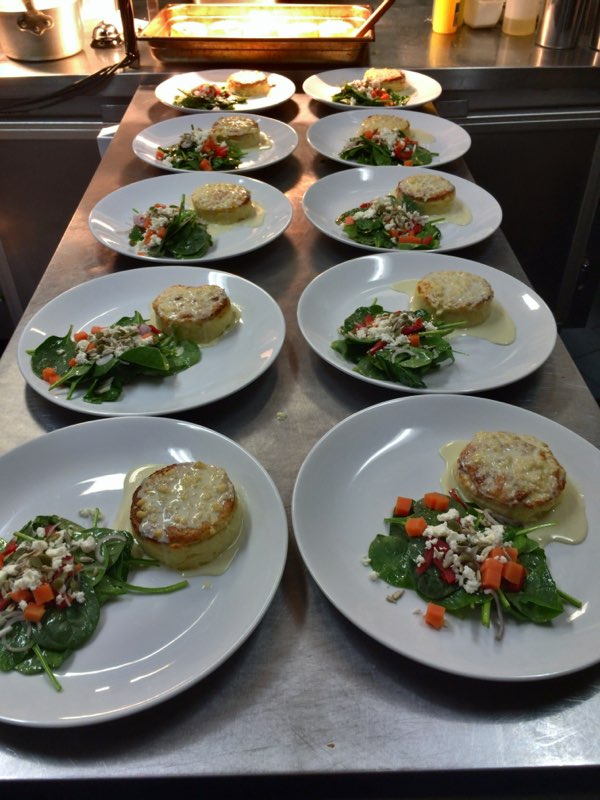 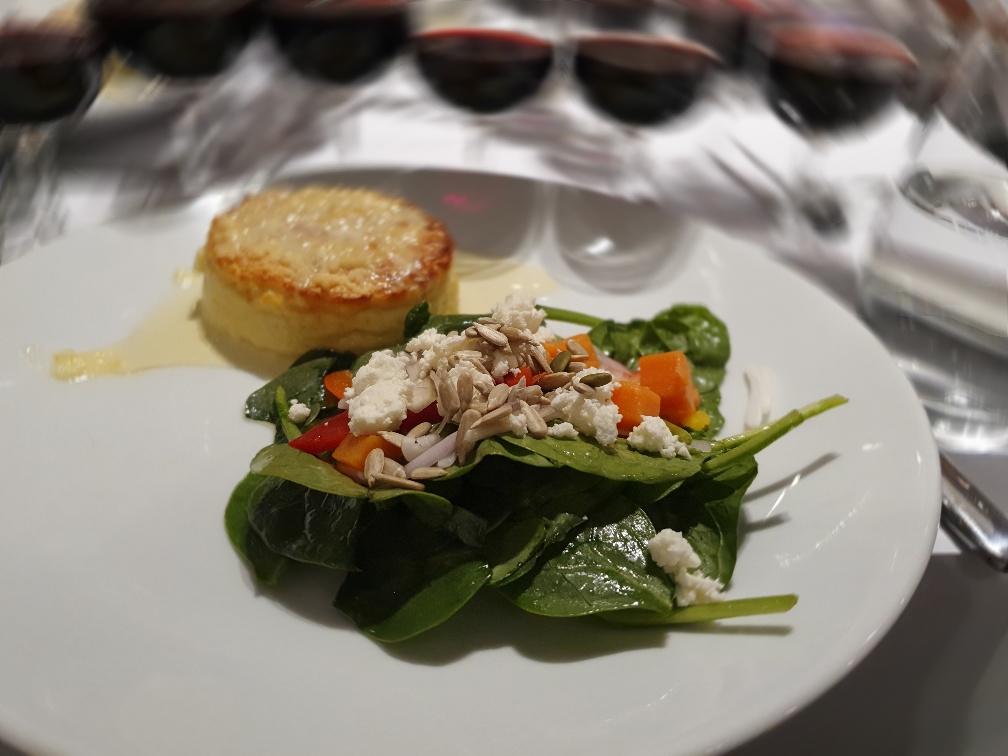 Fifty members sat down to the March wine lunch this week prepared by Nick Reynolds as Chef of the Year cook-off number 5. Nick as assisted on canapés by Bill Alexiou-Hucker. Nick summed up the meal as a vegetarian event which given the population of the room, received full agreement. However, the eggs may not meet the standards of others who would never be a part of our Society.

Canapés. The first canapé was “fancy” filo tartlets with baby cucumber, home-made hummus and cherry tomato slice. Look at the photograph to see why the word fancy was used. This was followed by hollow cucumber bases with olive tapenade and home-made baba ganoush.

Main Course. Nick had promised us a repeat of his double cooked soufflé which was so popular last year. The souffle was double cooked using blue cheese including Gorgonzola and Roquefort sauce served with a salad of baby spinach, kumara, feta cheese, sunflower, pumpkin seeds, eschallots and red capsicum with a white balsamic and olive oil vinaigrette.

As in 2018, the dish was lovely. One member commented (I paraphrase) that most of us would not do two at home and 50 is just crazy.

The aperitif wines had a clear winner in the Hugel Riesling. Whilst their entry-level wine, it is always good value and yet again showcases the world's most underrated grape. The Albarino which has been served once or twice before was a bit flat and needed a little more acid to get me excited.

The Wynns black label would have to be one of Australia’s most loved labels and was first released in 1954. It would also be one of the most collectable wines with many in the room having multiple vintages in the cellar. In recent years, the Black Label has continued to improve under the stewardship of Sue Hodder at Wynns.

As befits the sort of people we are, there was a lot of different opinions about each bottle but of course, there was bottle variation.

1998 – At release claimed to be the vintage of the century as with many 1998 wines from South Australia, it disappointed. The wine was not bad from what is now considered to be a lesser vintage, the fruit had faded with some extraction evident.

2004 – this was the last of the label to be bottled under cork and it was drinking well with all the attributes of both the Black Label and Coonawarra. Balanced, clean and drinkable.

2006 – this was the firmest wine of the group and only one of two of the Black Label at 14% alcohol. At its peak, drink.

2008 – 2008 was a warm vintage and there were signs of over-ripeness matched with a grippy finish. It may improve.

2012 – beginning to drink well with tannins softening already. This is a very clean and balanced wine. With well-presented and typical Coonawarra Cabernet overtones.

Riddoch Cabernet Sauvignon 1996 – some of us thought that tannin was starting to dominate although the structure of the wine was good. There was much difference of opinion and some loved it and one of our knowledgeable wine men suggested it could do with another 10 years ageing.

This was a fascinating tasting and Paul Ferman was thanked for the theme. No matter what each taster thought of each vintage (and there were large variations), the tasting reinforced what most of us think of the Wynns black label. It must be borne in mind that the prices of this wine have barely risen over the years and possibly decades as opposed to its stablemates at Penfolds which have seen dramatic price increases over the past 5 to 10 years.

Due to the unavailability of the original cheese, James was given only short notice to change horses and he served a Merco Mucia al Vino, a Spanish goats milk cheese. Apparently, it is matured with a natural rind for a minimum 45 days during which it is washed with local red wine which is very high in tannin. It had mild to mid fruity flavour and buttery texture but was not one of the members favourite cheeses served in recent times.

Spencer Ferrier (in absentia) continued his world coffee tour with Kenyon AA beans today. This has been one of my favourite coffees and today was no different.

Nick thanked Bill and our in-house chef, Leo, for their assistance in the Chef of the Year cook-off.

Brian Sproule closed the lunch reminiscing about the lunches of 50 years ago with other members present at this lunch and the changes that had been brought.