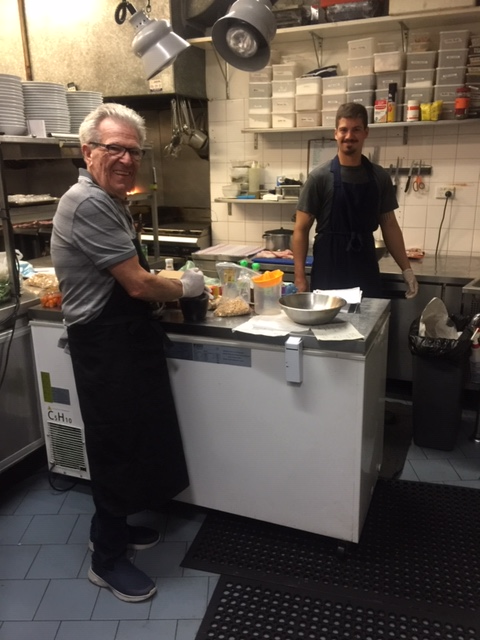 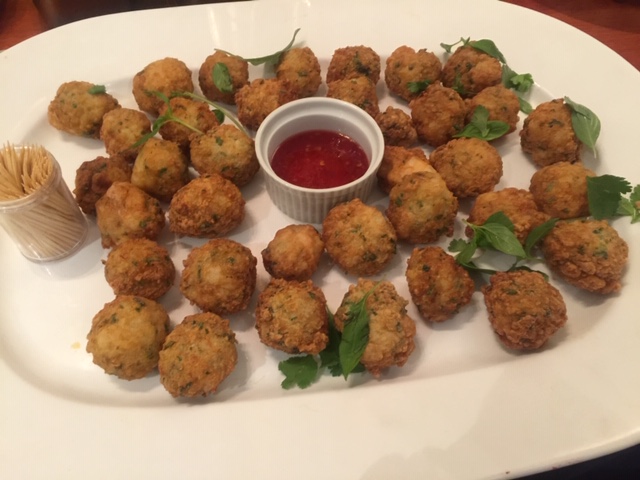 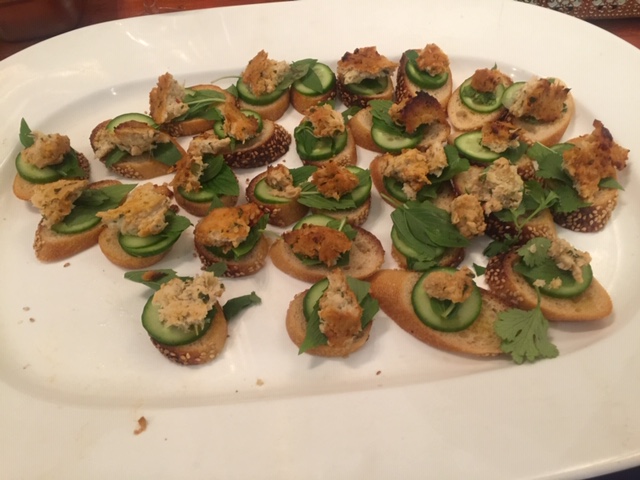 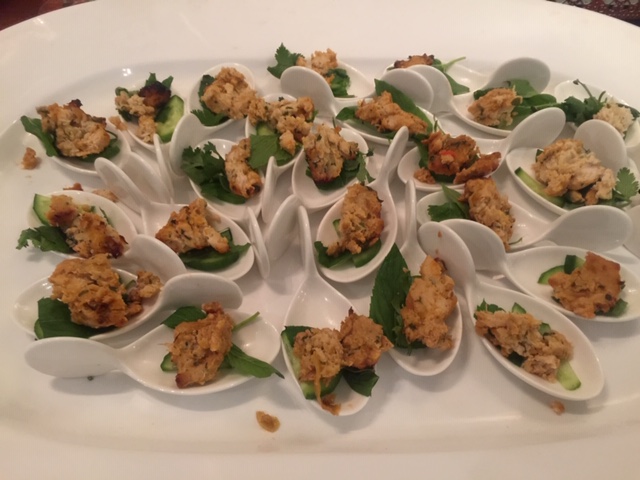 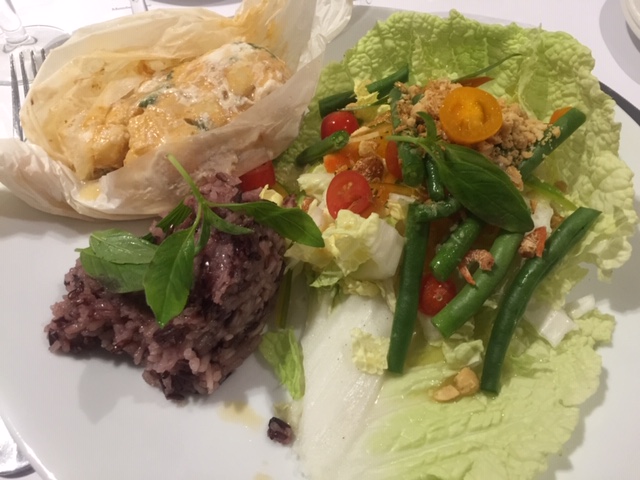 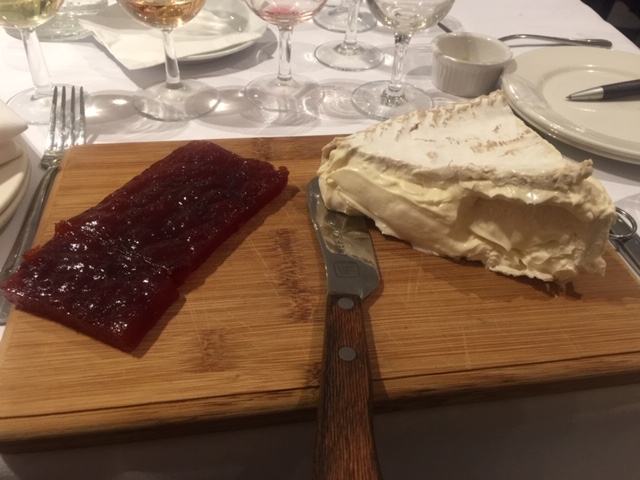 Hal Epstein was in the kitchen today for our sixth and final Chef of the Year cook-off.

He was assisted in the kitchen by James Hill.

Canapés. Hal and James provided us with two canapés today. The first, by James, was a chicken and lemongrass meatloaf served with lettuce, cucumber, coriander and mint. It was served two ways, with toasted croutons and on spoons. An interesting canapé that had residual heat from chili and sriracha glaze. The inspiration for this dish is the Vietnamese Ban Mi sandwich. Next was Hal's prawn balls made with prawn, coriander and shallot, seasoned and dipped in flour. Egg whites and bread crumbs were used for the bind with a dipping sweet chilli sauce. They were plump and delicious with great flavour and well commented on by members as most of the canapé was prawn with no extra filling

All the canapés were spicy and popular and a challenge for an aperitif wine however the Pikes held up well.

Aperitif wine. The aperitif wine today 2009 Pikes Traditionale Riesling. Pikes always make a fruit forward style, and this was no exception. After 10 years it had showed definitive fruit and some freshness and showing more brown lime than fresh lime. And certainly, no petroleum characters. Perhaps best drunk a few years ago, it was still lively on the palate, although there was a little bottle variation.

La Guita Manzanilla. We’re back to some fresh sherry with this wine. Lovely purity with its traditional tangy, salty dryness. A long finish with nutty flor notes and a refreshing minerality.

Main Course. Rather than show us the rabbit dish that Hal was nominated for as CoTY contender he took us on a tour and taste of Thailand.

Today we had Homok a traditional dish (steamed fish pudding) cooked in coconut milk with spices and herbs something rarely available in Sydney Thai restaurants. The fish Hal used was monkfish and served in paper parcels.

The accompanying dishes were:

Kao Nieo Sticky rice white with some black mixed in this helped to counteract spiciness.

Favourably commented on and enjoyed by all, the heat wasn't overwhelming, and we had a great balance of flavour, spice and texture in the meal.

2015 Pressing Matters Riesling R9. Rather closed with hints of lime and apricot. It had a pleasant sugar/acid balance although a little more richness would have carried the sweetness further. Nevertheless, it went extremely well with the lightly spiced main.

2012 Triennes Rosé. I personally believe this one of the best rosé producers in Provence. There is a wonderful savoury complexity from its mix of Cinsault and Grenache. While we are encouraged to drink rosés in their youth, the freshness of this wine reflected its prestigious Burgundian pedigree. With its fruit and dryness, it was another excellent companion to the main.

2006 Tyrrell’s Vat 47 Chardonnay. Although perhaps a little mature in flavour, this Chardonnay still had the right weight and texture to complement the Burgundian cheese. The oak was a little separate to the fruit having been made in what we might call the ‘old style’.

2008 Coldstream Hills Pinot Noir. Another Burgundy variety to match the origin of the fromage. We had this wine not that long again, perhaps it was the cheese, but there seemed a slight volatility which, with the toasty oak, masked the fruit. The palate, however, had a very good flavour, texture and length that easily carried the fat of the cheese.

James Healey presented a Delice de Bourgogne, a pasteurised cow's milk from Burgundy. Served at room temperature it was a challenge to section.

Described as a decadent triple cream incredibly rich with a buttery sweet interior with a slight sour note on the finishing palate.

Hal made a quince paste (now in season) to accompany the cheese. Hal mentioned that he had miscalculated the cooking time and the paste was somewhat caramelised. It didn't detract from the flavour.

Spencer continued our African journey this time with coffee from Malawi, it had a medium to light flavour a little tannin, good drinking.