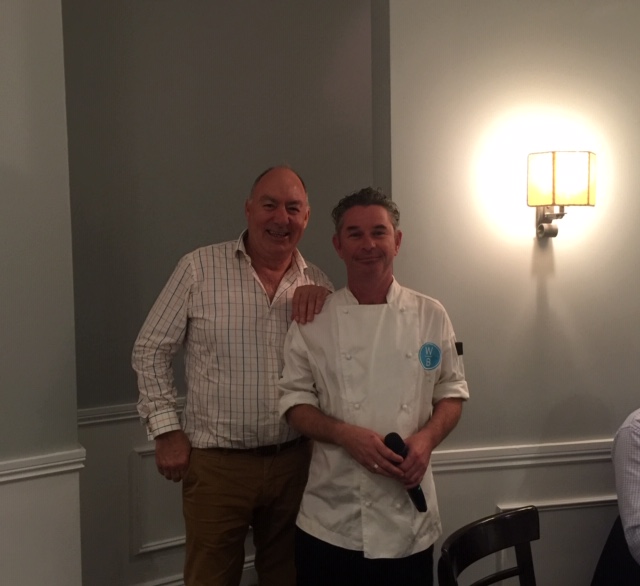 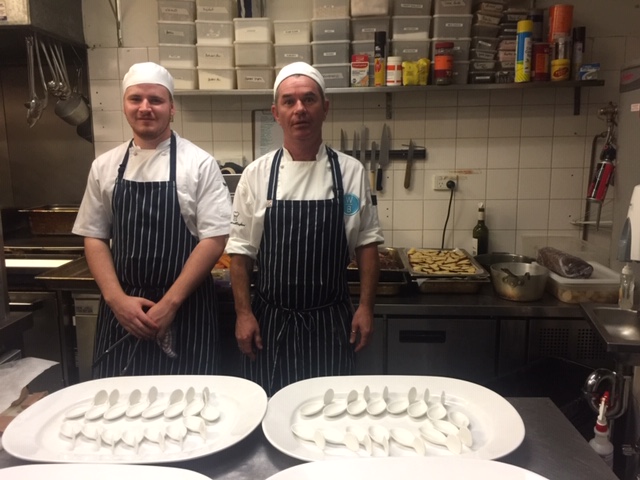 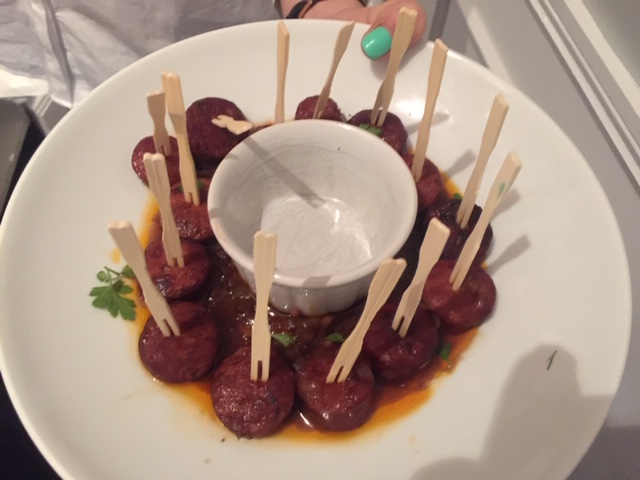 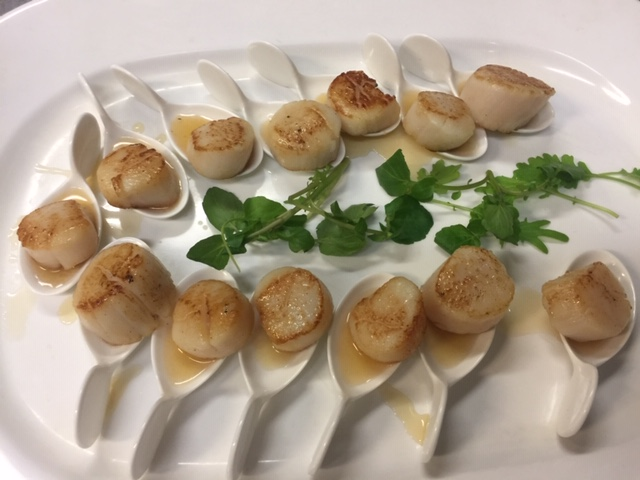 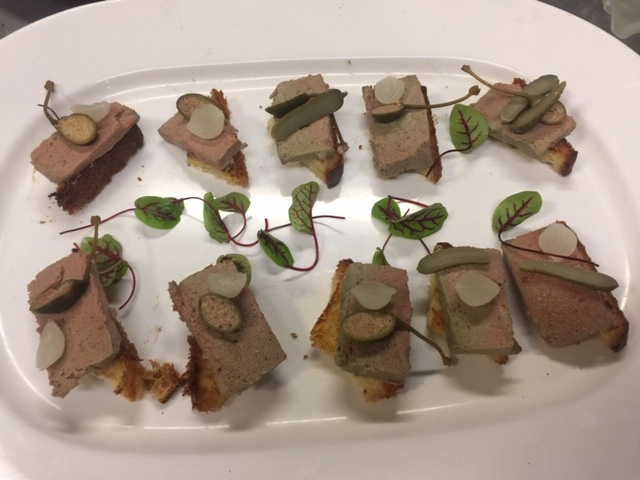 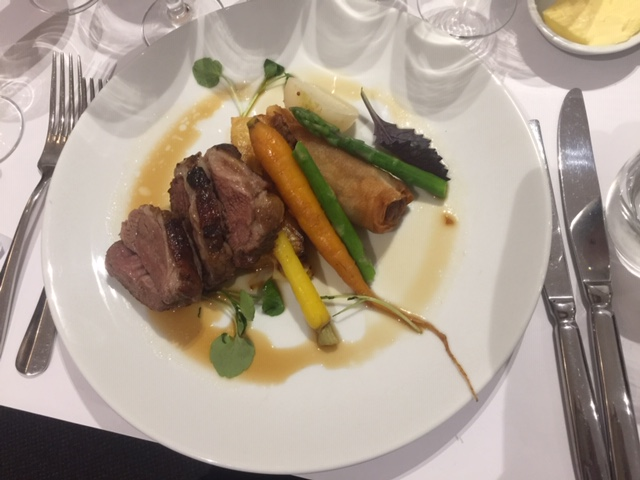 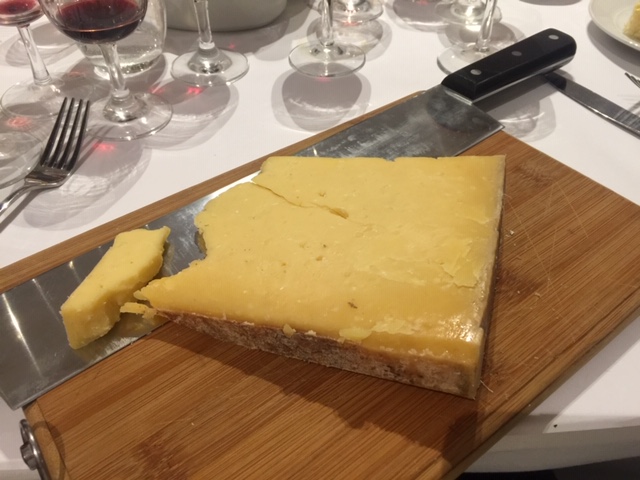 Thanks to James Hill and Chilly Hargraves for the reviews on food and wine respectively.

In our first mixed lunch of the year, we had sixty plus members and guests attend. Our executive chef of the day, Immediate Past President Keith Steele, organised his mate Jason Hannah from William Blue Dining to prepare us lunch. Jason is the Executive Chef and Head Teacher of the William Blue Dining training facility for apprentice chefs and the hospitality industry. Jason was assisted by Jack his senior support at WBD.

We had an abundance of canapés today the first from Keith Steele, chorizo and red wine. This was followed by Canadian seared scallops cooked with ponzu, mirin, white soy and lemon juice. Juicy and plump perfectly cooked they were a delight as was the chicken liver parfait on brioche with pickles of onion, caperberry and gherkins. All were made in house and were of full of flavour with great texture and some comment was made on portion size.

All canapés were well matched with our aperitif champagne.

The central table was heaving today with the weight of a dozen bottles of the rosé champagne from Aubert et Fils. Although a rather simple fruit driven style, as explained by our wine master, it had developed additional layers of complexity after 12 months in our cellars.

A range of other wines was brought to the table. It was a selection from those we have seen over the last weeks, so we won’t discuss them. Enough said that they were well received by those who’s preference was towards still wines.

vegetable dauphinoise of carrot, potato, turnip, kohlrabi and Parmesan, heirloom carrots and asparagus. One part of the dish that had us intrigued was a pickled turnip cut in half and pickled with cloves and juniper, it was a perfect acid balance for the lamb. Served simply with a chicken bone brown jus made on the day. Looked great on the plate and better on the palate. Delicious!

The two reds served with the lamb course were quite different in style and had quite different appeal to separate tables in the room. The 2009 Blue Pyrenees Cabernet Sauvignon surprised by its youth and vigour. The varietal characters of cassis and plum were reminiscent of northern climes. With an excellent fine grain tannin finish, it was a great wine match to the main course.

The other red, the 2005 Ebenezer Shiraz, was a good expression of an aged, warm climate Barossa Shiraz. It had the expected rich fruit and vanilla oak. Preferred by many tables, it was probably moving into its third plenitude with the tannins starting to take over the finish.

A few larger tables benefited from the 2007 Calo Reserva Tempranillo. A Rioja in the modern style with still fresh fruit and fine tannins, it was another good match, although some found the oak was too dominant on the finish.

A couple of lighter reds were served with the Pyengana cheese. The 2015 Mauro Molino Barbera d’Asti had the expected bright cherry and acid with soft tannins. There was an earthy richness to the palate a little closed by some reduction. Being under cork (Diam) it was starting to show its age.

The firmer of the two was the 2009 Coudoulet de Beaucastel Côtes du Rhône with its lovely aromas of raspberry and spice. The palate was all black cherry and spice with typical firm, dry Rhône tannins.

To finish the meal, we received 500 ml bottles of 2010 Château Aydie sweet white from the Gascony region in southwest France. This rare appellation is the unusually named Pacherenc du Vic Bilh. Made from the white variety Petit Manseng it had a pleasant mix of ripe fruit flavours and botrytis. While not as luscious as Sauternes, it certainly had the desired richness.

Cheese and coffee. Our Cheesemaster James Healey provided us with Pyengana cloth bound cheddar from Tasmania which came to the table at a perfect temperature with good texture and crumbly structure with an aroma of herbs and honey.

Coffee. By Spencer Ferrier. The coffee was Bali God Mountain, a gentle full flavoured premium coffee and Oolong tea, an aromatic style of green tea which leads tannin and more flavour. Thanks also go to Spencer for volunteering to round up enough bread for us on the day as that it was one thing left off the checklist.

Keith invited Jason Hannah to talk to the food produced for us today and he advised that he had taken a table for his family and friends with parents-in-law joining us from New York.

It was a great day with many continuing the enjoyment of the day at the bar of the Royal Exchange.