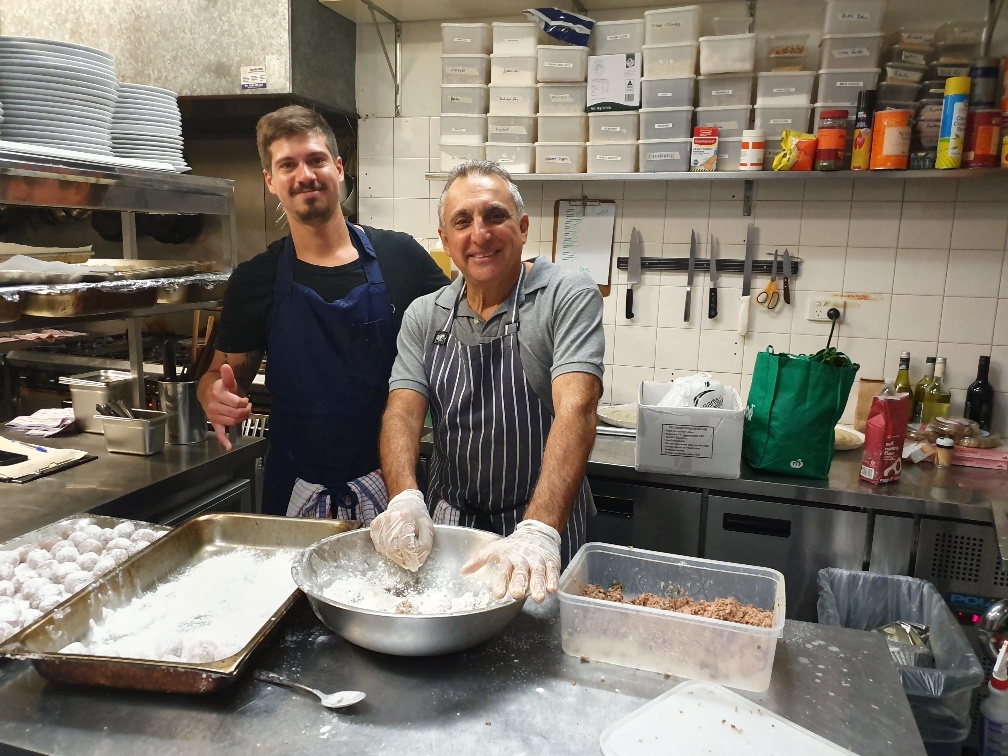 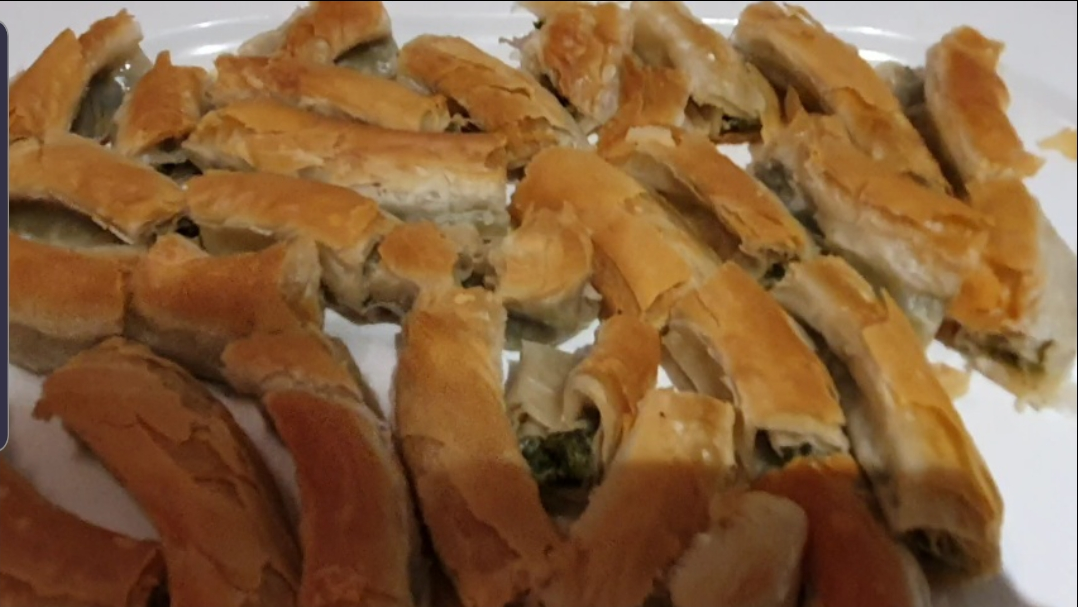 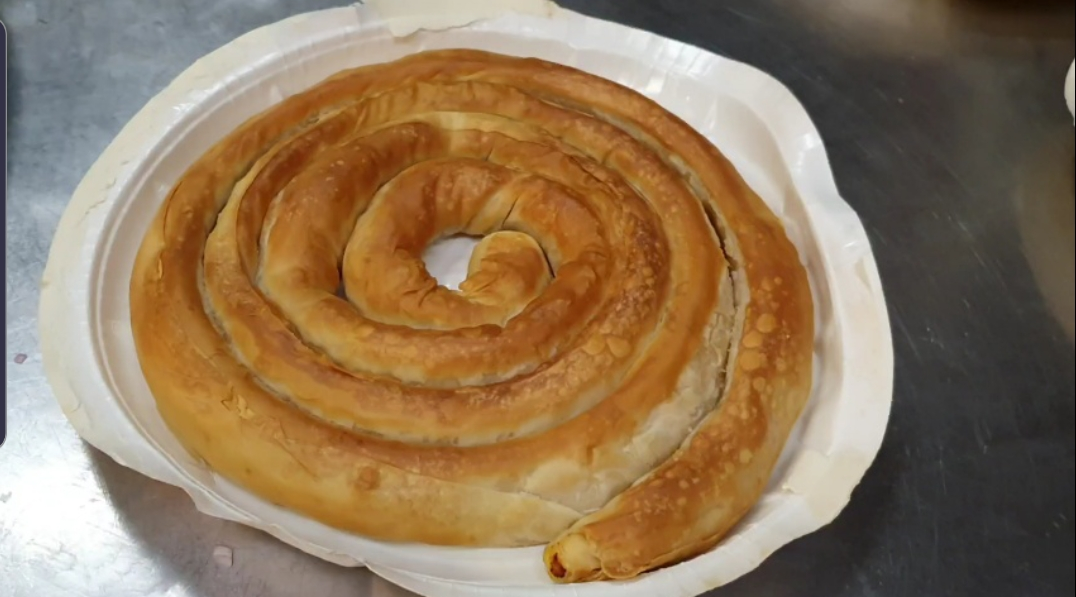 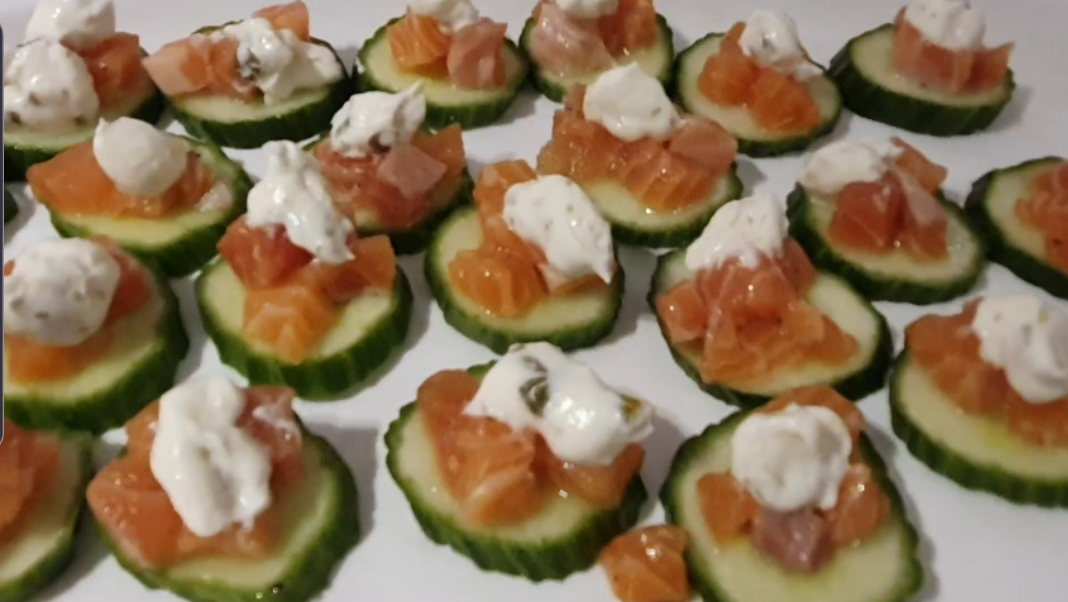 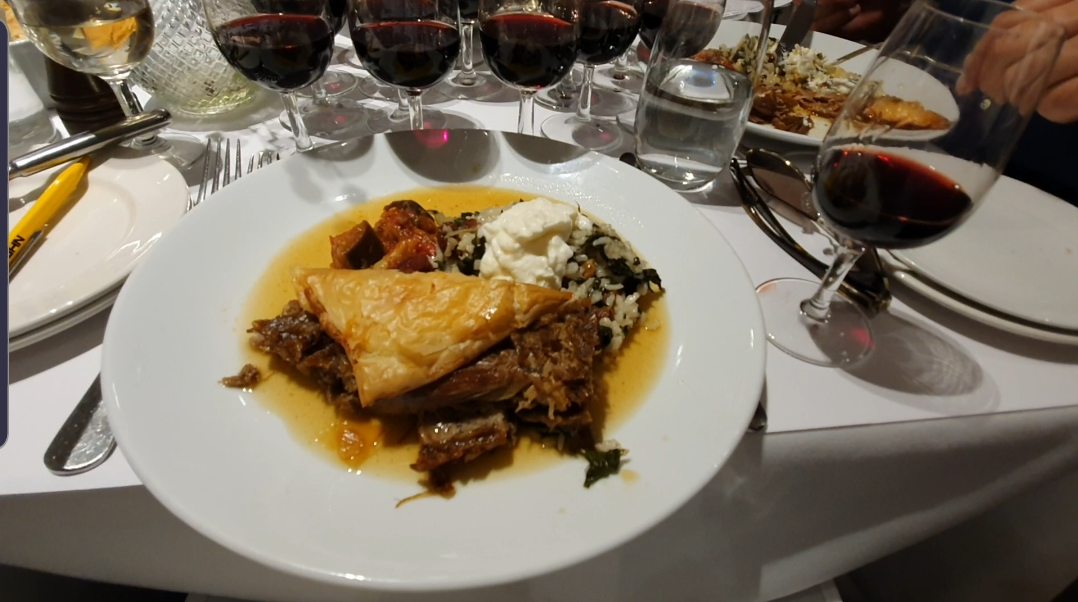 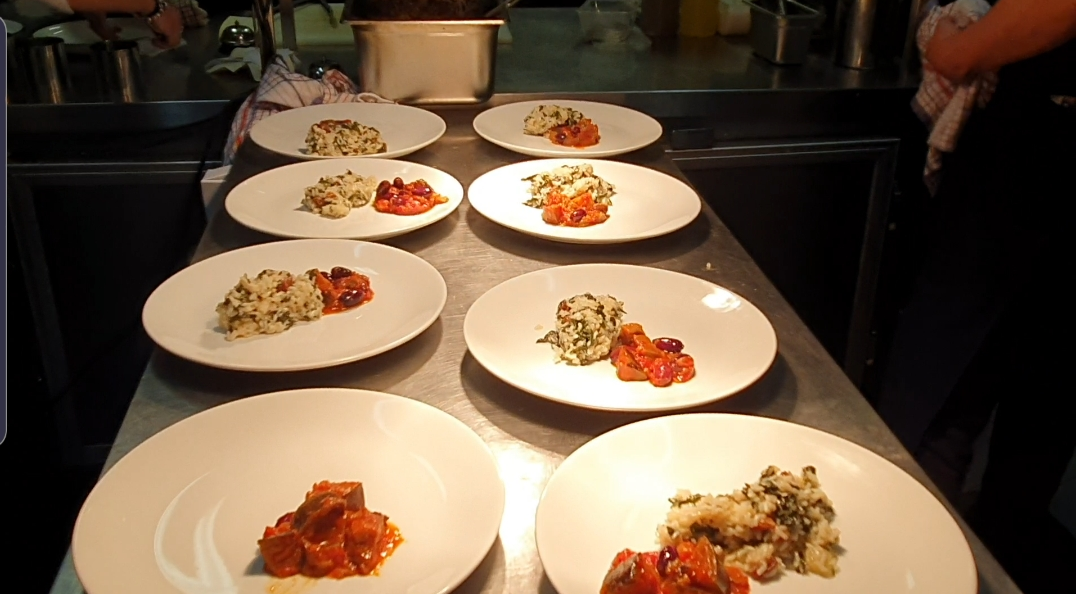 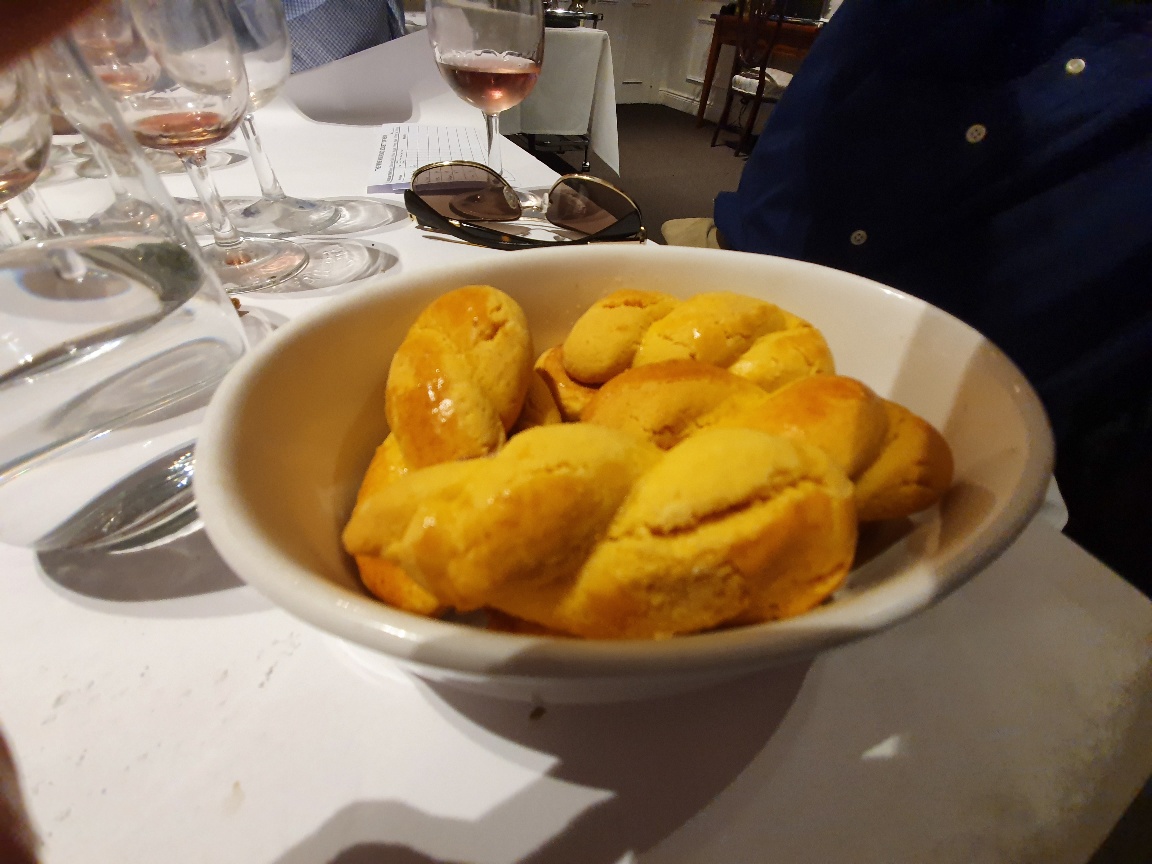 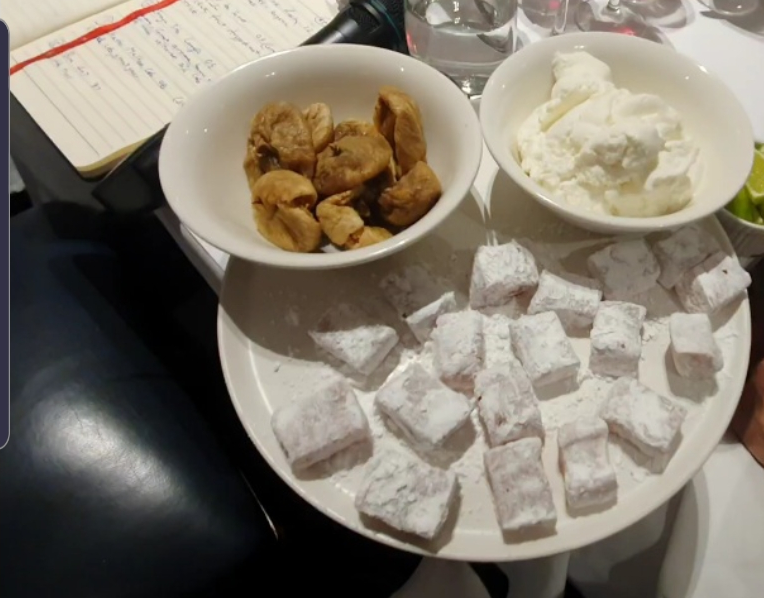 Our Foodmaster, Bill Alexiou-Hucker, was in the kitchen today for his now famous Greek Easter feast for our April wine lunch. A Greek Easter feast is nothing without a plenitude of food and this lunch fitted the bill. No pun intended!

Aperitif wine. To start off proceedings today we had a wine that not many of us would be familiar with, a Hochkirch Riesling from the Grampians or Western district of Victoria. Not a typical Australian Riesling, it was quite full bodied in the mouth, oh so slightly off-dry and a little Alsatian in style. Another Riesling style that divided the room, but I thought a great style to show off yet another vein of what is possible with Riesling in Australia from the multitude of areas in which it is grown.

Bill had pressed the lamb overnight with bricks to ensure it could be cut and served in serviceable pieces rather than in the slow-cooked pulled meat style. In any case, very tasty lamb well set with the sides.

Dealing with the wine in pairs, the Charles Melton was pretty much what you would expect from the wine. 2008 was a good year and was a very rich Cabernet showing much ripeness. The Château Villa Bel-Air from Graves was 50% Merlot and could be described as very Bordeaux. Dry, plush and enjoyable.

The Chateau La Serre from St Emilion experienced significant bottle variation. Mine had some stink with the fruit almost totally stripped out. However, after poking my nose into a glass from another table it was again a typical robust Bordeaux wine from the right bank. Whilst not unanimous around the room, the Gaja Sito Langhe from Piedmont was my favoured wine of the day. Not your usual Langhe, the wine, was approximately equal components of Nebbiolo, Merlot and Cabernet Sauvignon. The tannins of the Nebbiolo and the savoury characters were very evident. Drinking beautifully.

The final two wines were Australian classics and the Bin 407 at 22 years of age was looking a little tired (or at least the bottle I tried) but still drinking well. The St George at a similar age was in good condition, although the fruit was starting to recede. It was for many the wine of the day.

With the exception of the Charles Melton all wines today were under cork.

Cheese and coffee. James Healey had selected a Meredith goat curd cheese for today. Quite a delicate cheese, it comes in a container where one can spoon it out for spreading on bread. Not the favourite of many, but certainly an interesting variation to our normal weekly cheese.

Coffee. Spencer today provided us with one of his favourite beans, Kenya AA. It also happens to be the favourite of many in the room and it did not let us down with its medium sweet characteristics.

One can simply not finish a Greek feast without accompaniments. Bill provided us with rose water and almond Greek delights, koolouria (Greek Easter biscuits), dried figs and of course a digestive, Masticha from chios and lime.

The feast was true to name, and a good time was had by all. A great effort Bill.