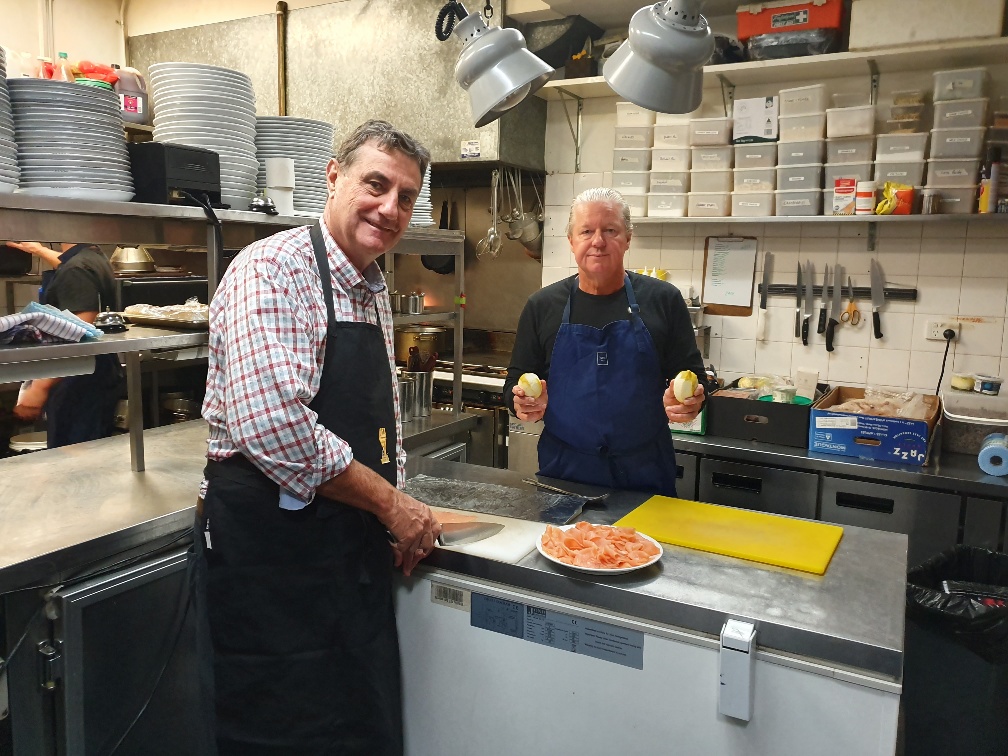 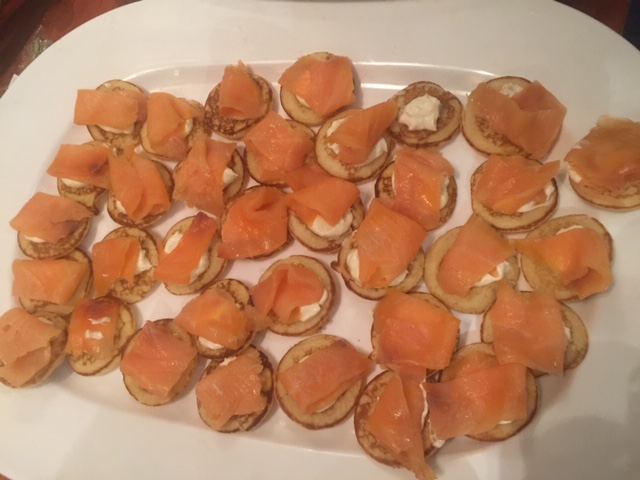 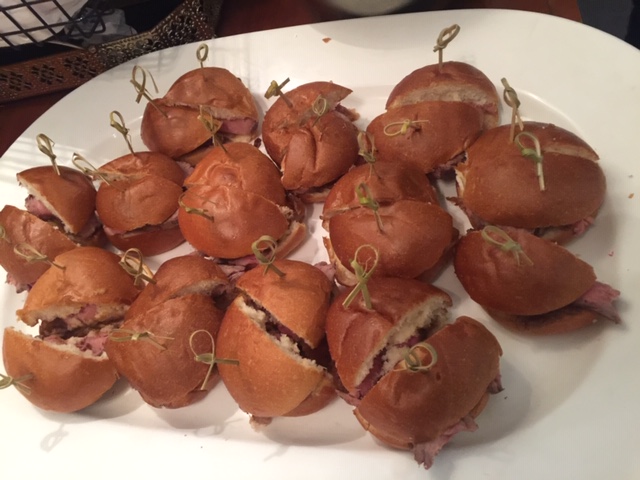 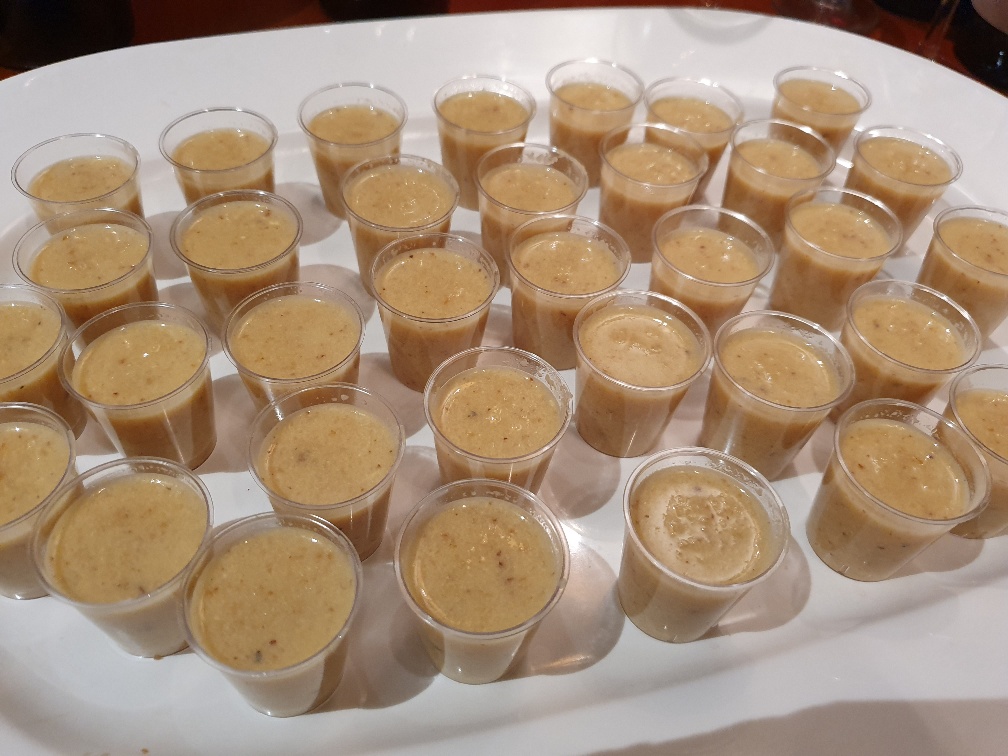 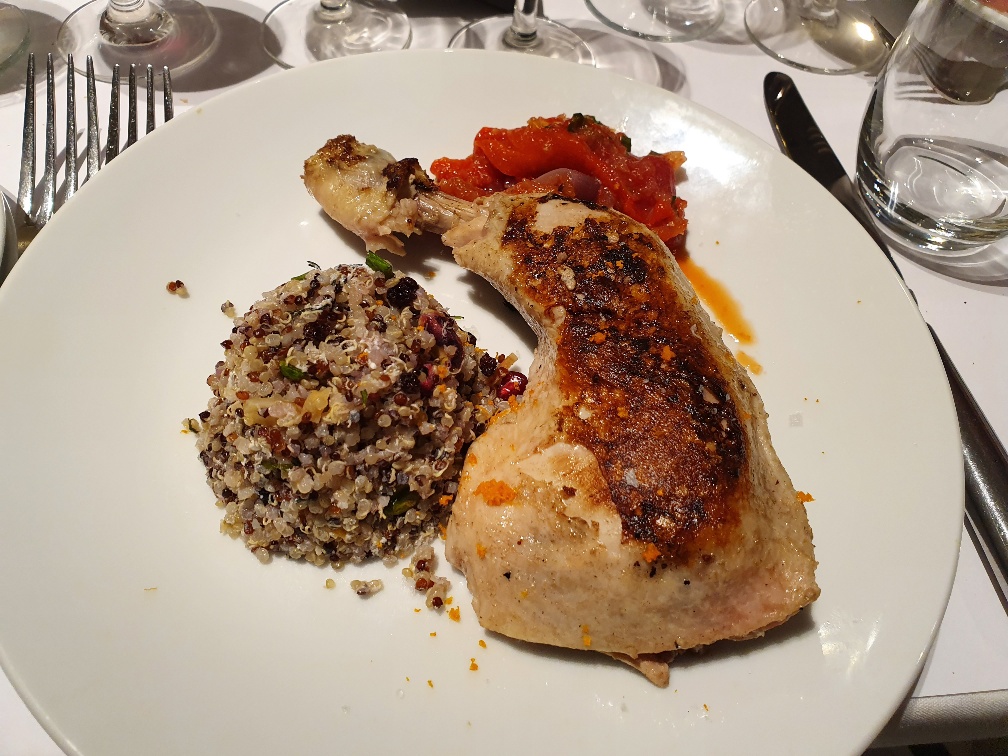 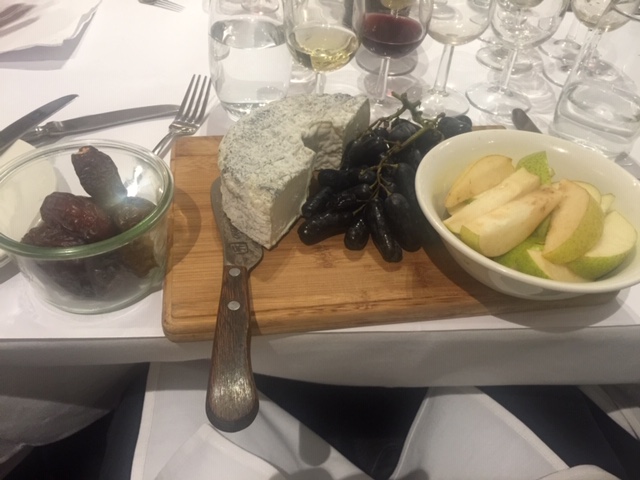 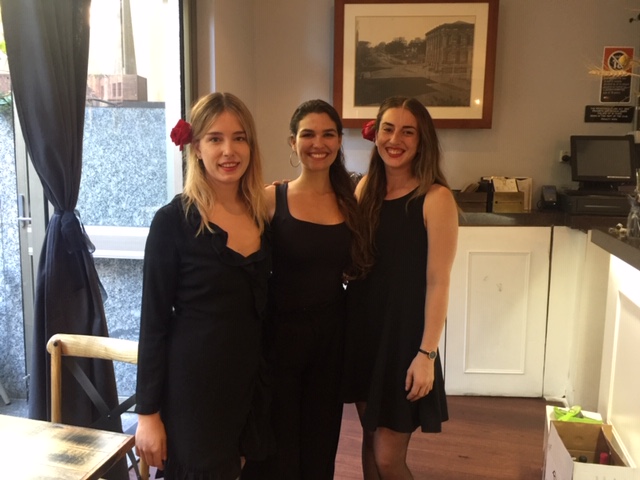 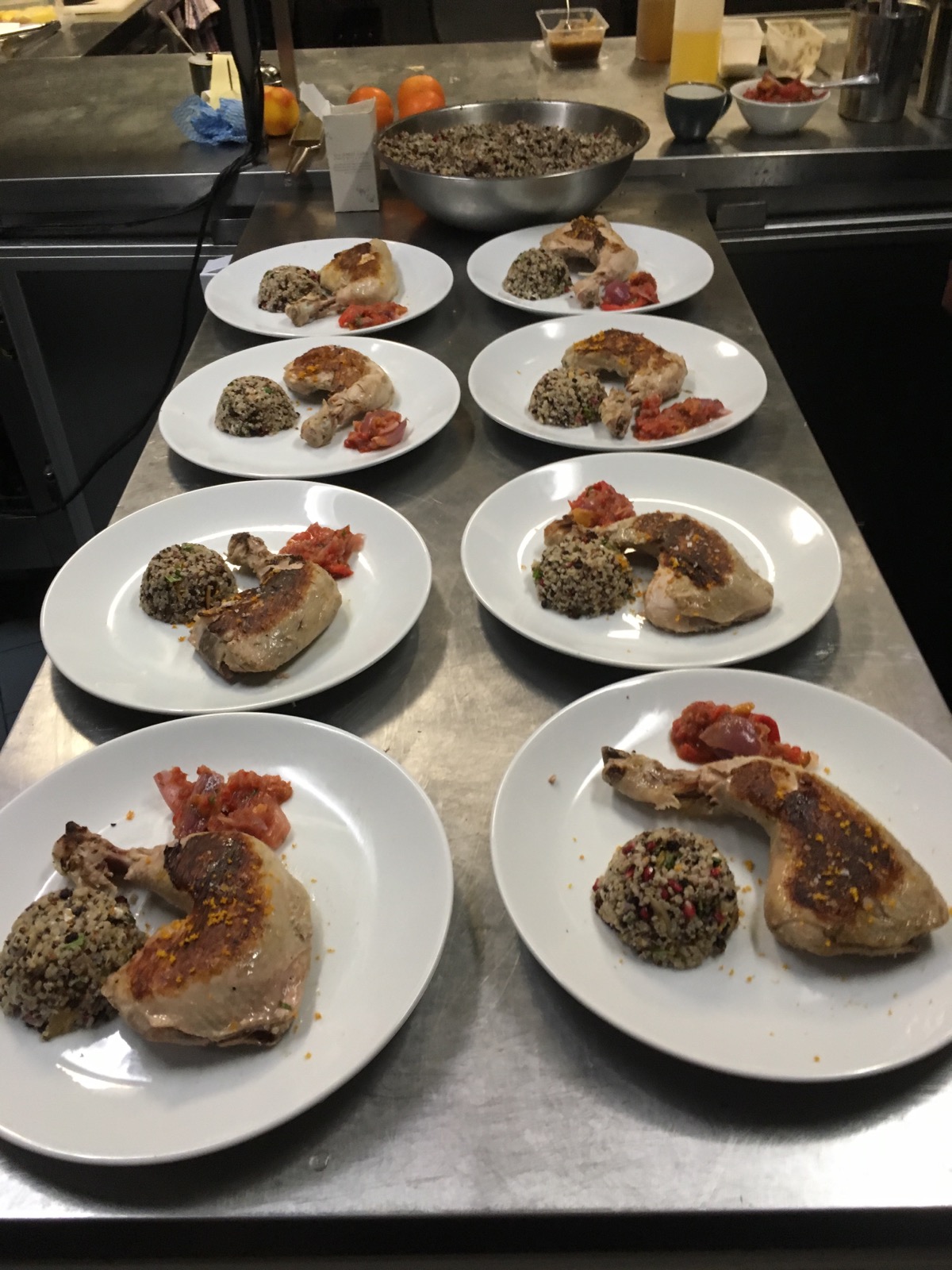 Paul Thorne was in the kitchen today assisted by Matthew Holmes and Nick Reynolds.

Our three waitresses today from REX were all dressed in black and red in preparation for the REX Spanish night at the conclusion of the Wine and Food Society lunch. A nice touch for the day.

Canapés. Three canapés before the main are becoming somewhat standard and so again today we had three. First were blinis with crème fraiche and Atlantic salmon. This was followed by mini hamburgers with a filling of caramelised onion and rare beef. Possibly a better term is sliders. Finally, a cauliflower soup or consummate made from duck stock with some cardamom overtones.

The contrast between the three welcoming and the favourite of many were the rare beef sliders.

Aperitif wine. Where to start. Our aperitif today was Pittnauer Perfect Day White 2017 from Austria. It did set the cat amongst the pigeons as they say. The wine was unusual, to say the least with some bottles showing a little cloudiness. To be blunt, it was not well liked by the room and opinion differed as to whether it was faulty or whether it was deliberately made to be a little bit in the orange mode. There was a strong preference for the sherries of the day

Main course. Paul served individual chicken Maryland which had been marinated for 24 hours in buttermilk and star anise and then sou vide. This treatment led to them being succulent and tender. Accompanying the chicken was quinoa, pomegranate, sultanas and pistachios and more. There was also an accompanying relish constituted of capsicum, onion, tomato and some orange zest.

Comments were positive with the only downside being a couple of comments about the main being a little cool.

I felt it was good to be back on the chicken trail.

The French Chardonnay at 6 years of age was drinking at its peak and was arguably the wine of the day. There was some oak evident with overtones of peach and honey. The Austrian wine from the same maker as the aperitif was a completely different kettle of fish. This wine was a blend of Blaufrankisch and Zweigelt the latter a cross of the former in the Pinot Noir style. A beautiful juicy, fresh and drinkable wine for early drinking, as we did.

The Kalleske wine suffered from major bottle variation with a couple of bottles being corked. These were replaced with other wines of a similar vintage.

The Kalleske was for me not particularly enjoyable, being jammy and extracted. Enough said. The Nick O’Leary Shiraz from Canberra district was a far superior wine. The wine had those cool climate Shiraz overtones of spiciness and freshness. A good drink.

Cheese and coffee. The treat of the day was James Healey blowing the budget and serving us the La Luna Holy Goat Brigid’s Well cheese from Castlemaine. Arguably Australia’s most expensive cheese, it is always top shelf and proved so again today. James was overseas for the next 4 weeks, so he definitely left with a bang.

Coffee. By Spencer Ferrier in absentia was from Malawi (a first?). A cooperative sourced bean, it was quite full bodied with a satisfying chocolate finish.

With Paul’s closing comments on his meal, he thanked Matthew, Nick and all staff in the kitchen including the chef, Leo.