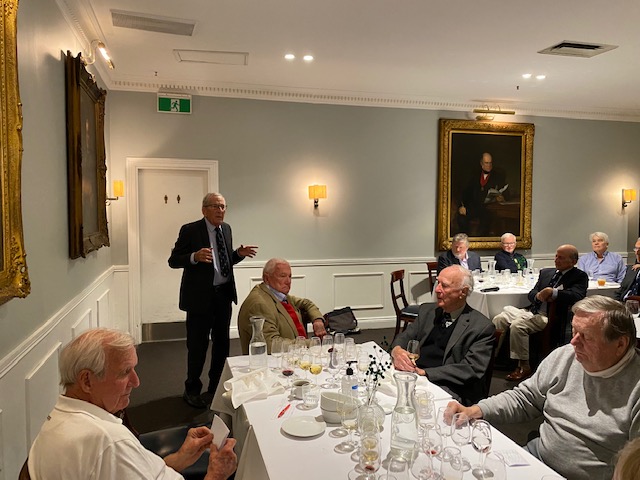 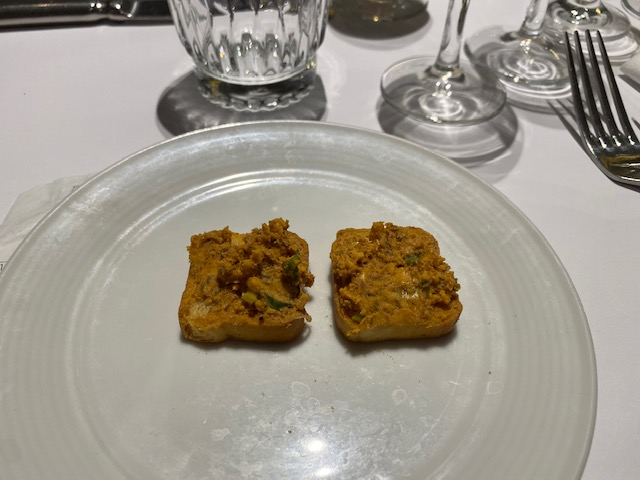 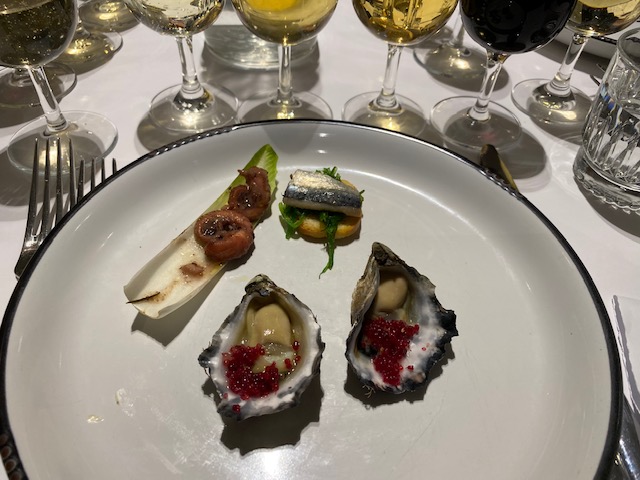 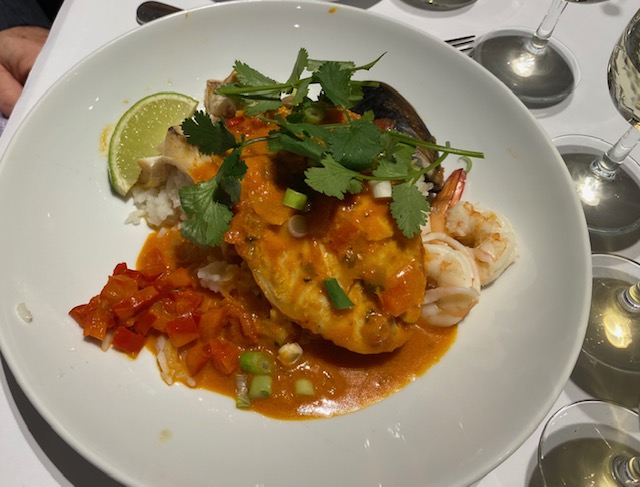 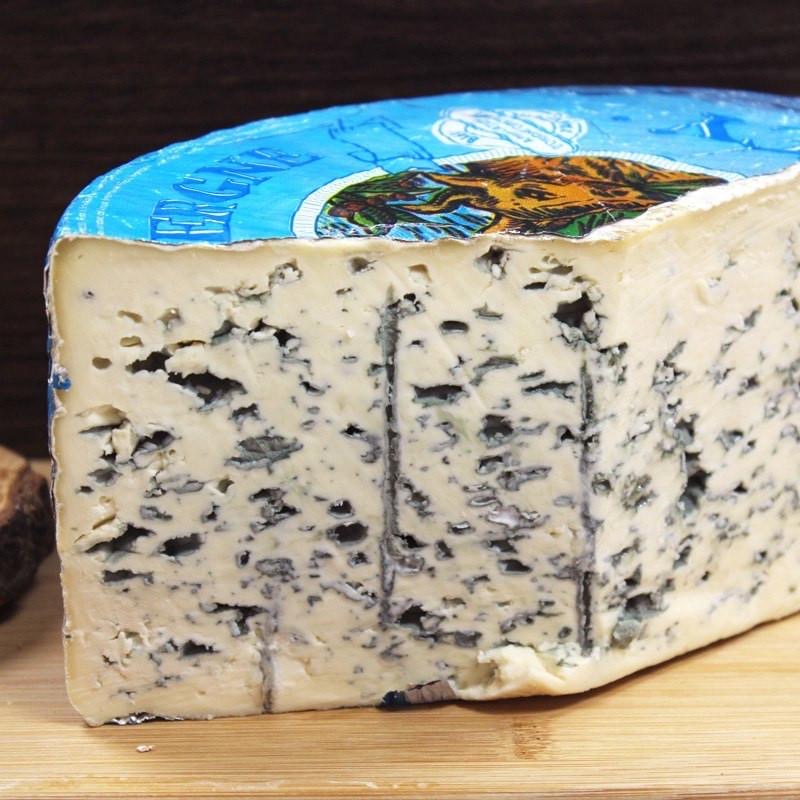 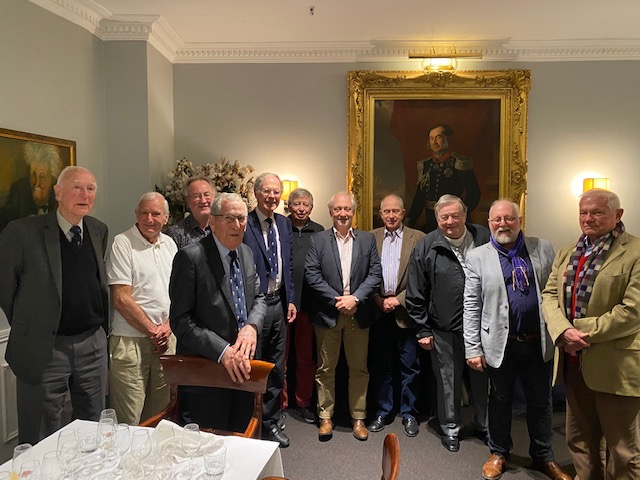 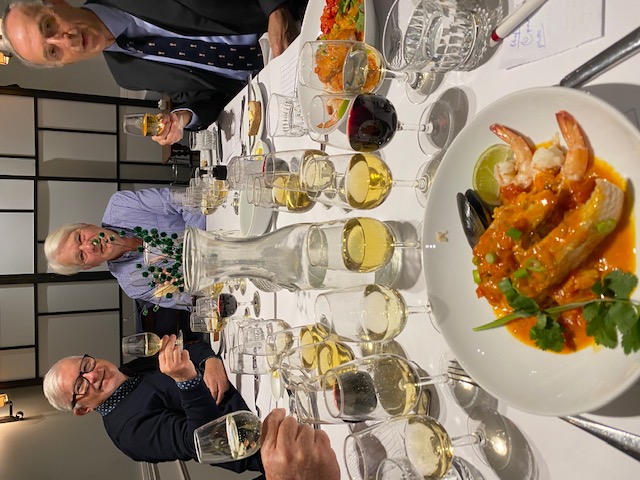 Today we had the A-Team of Gareth Evans and Ted Davis in the kitchen. Expectations were high as there are five COTY gongs between them and they want to look after their good friend, the Birthday Boy, Terry Stapleton (happy 90th).

At the table on arrival was a canape of a spread on a toasted square (two pieces). The spread was tinned sardine, butter, chilli, tarragon and chives. This was a tasty morsel to get the taste buds going.

Served to members were a plate containing:

Two oysters – a Pacific and rock oyster topped with ruby finger lime – pretty and plenty of flavour from the lime fruit.

Piece of sardine on Japanese pickled seaweed served on square toast. The sardine was light and delicate, but the flavour was lost with the seaweed.

Octopus on witlof – The octopus was poached in rosemary, lime and garlic. Great flavour and the witlof gave the octopus a slight bitterness.

The entrée was pretty on the plate and was well received.

The main was a beautifully presented and colourful Brazilian styled dish.

The hero of the meal was well prepared and rarely seen, flame tail snapper (from the Queensland reef). The snapper was poached in the oven in pre-cut pieces with the bone included and skin intact. The fish sat on a bed of steamed rice. The fish was covered by a healthy serving of a sauce comprising of coconut cream, tomatoes, capsicum and chilli. The fish was delicately prepared and cooked well although adding salt really lifted the flavours. The sauce took some down a Thai style red curry path however with tomatoes dominant and the chilli sparingly used we were all happy to accept the meal was from South America. Accompanying the snapper were a few poached prawns, a mussel, a dollop of capsicum and chilli sauce to add some ‘umph’ as required. The dish was topped with coriander as a garnish.

Cantorel Bleu d’Auvergne AOP - made in several sizes of wheel, this cow’s milk cheese has been made in the Auvergne region for several centuries. The cheese was once made only from the milk of mountain dairy breeds and matured in mountain caves to utilise the unique blue mould flora that flourished there.

Although no longer cave ripened the cheese has been protected by AOC since 1976. Each whole cheese is foil wrapped to prevent a rind from forming as it matures. After 3 months it develops an even spread of steely blue veins through the body of the cheese and a moist and slightly crumbly texture. The flavour is quite tart and salty. Ours was perfect not so tart and salty.

Accompanying the terrific blue today was green salad based on a mixture of four different leaves and fused within a ruby grapefruit and sugar dressing.

Iggy’s sourdough bread was used throughout the lunch to accompany the meals.

A thoroughly enjoyable meal to celebrate a life member and past-President of the Society. A very special day.

Today, for Terry’s birthday, he most generously donated 2 champagnes. The first, Pol Roger NV, is a Society favourite, as it was for Winston Churchill. Although poured slightly early, as is our COVID requirement, it held its mousse well and showed aromas of brioche and green apples. The corks showed some cheville (pronounced sheveeya) which suggests some time since disgorging. This is the term describing a cork that doesn’t recover its mushroom shape on extraction, derived from the French for peg or dowel. While it did show some development, it still retained the house style of purity and elegance.

The second champagne was again NV and from the house of Piper Heidsieck. A favourite of Marilyn Monroe (she reputedly always kept a month’s supply on hand - I assume that was a lot), it has had a few changes of ownership since then. With less Chardonnay and time on lees than the first, it showed freshness, but without the complexity of the Pol.

Gareth suggested a couple of Mudgee wines would be appropriate for Terry on this august day. The first of these was a 2019 Robert Stein Riesling. Although pale in colour (as a number of members commented), it showed beautiful purity of lime and bath salts with freshness and clarity and a tense acid finish. Still a very young wine, it will be interesting to see this mature over the years.

Two Rhône whites from the Yves Cuilleron estate followed. Both wines were very much in the domaine’s style of fermentation in old oak with extended lees contact. The 2018 Roussanne showed fresh fruit (very ripe, towards oily) with an attractive firmness and weight on the palate. The 2016 Lyséras, a blend of Marsanne and Roussanne, carried much more artefact and obvious textural lees notes. A rather metallic finish did not please the cellar master.

The final was a classic 2006 Rosemount Mountain Blue. From Mudgee of course, and closed under screwcap, it was still in its prime. Perhaps exhibiting more Shiraz than Cabernet, it was extremely well structured with a harmony of fruit, oak and tannin. Greatly appreciated by most in the room - some more than others.!! We perhaps could have had another bottle.