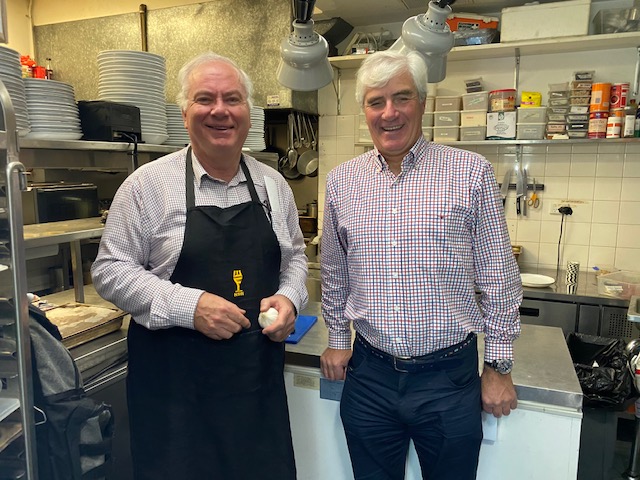 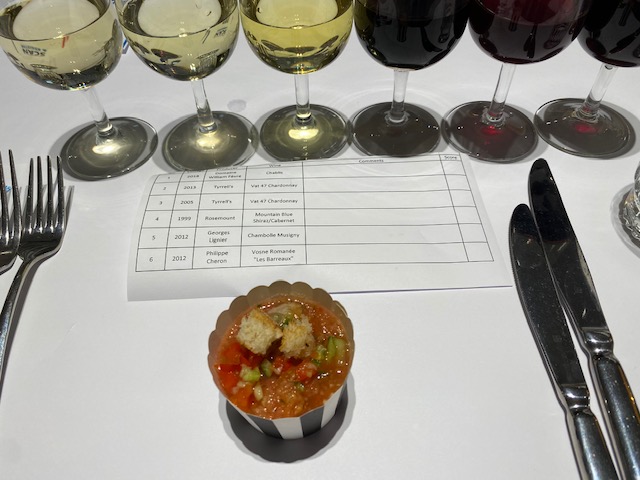 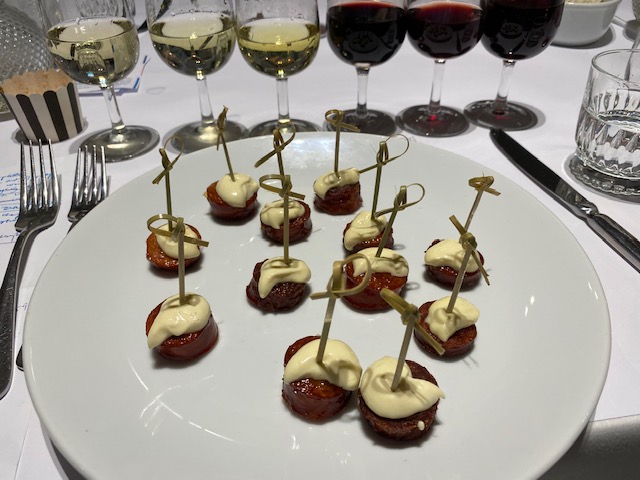 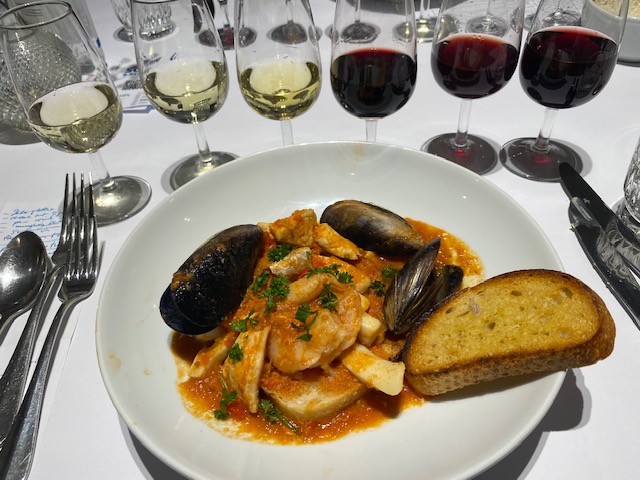 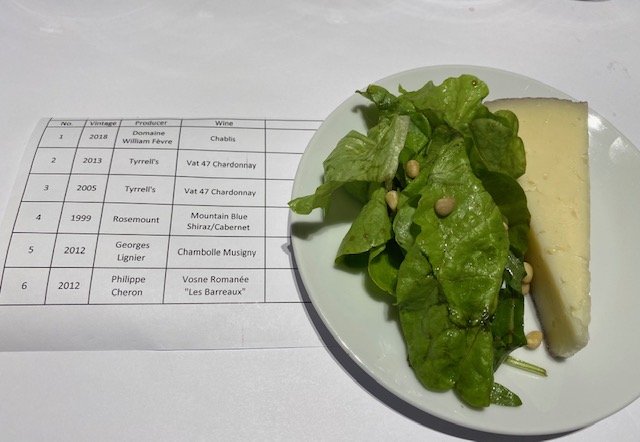 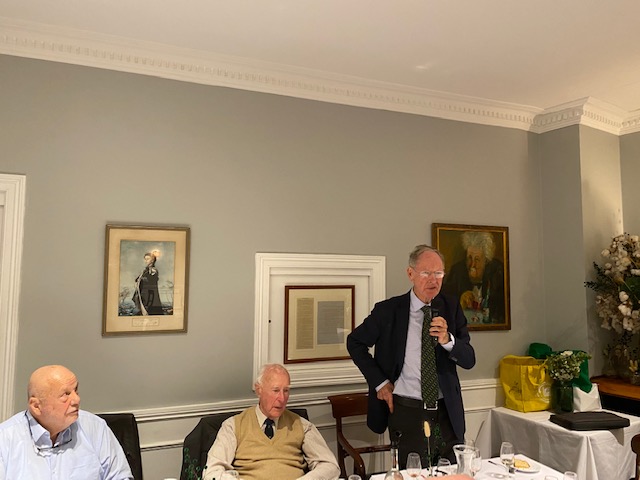 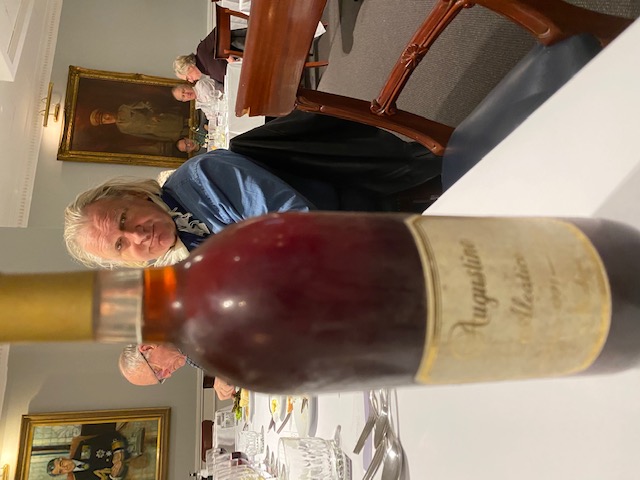 Food review by James Hill and wine write up by Nick Reynolds, with background information supplied by Charles Hargrave

Robert Rae was our chef of the day ably assisted by Nigel Burton on canapés. A special lunch today to celebrate the 90th birthday of life member Ray Healey.

Mixed seafood was presented with a full-flavoured tomato sauce cooked with celery, oregano and white wine. The sauce was cooked a day before so the flavours were well integrated. The seafood and sauce sat on a piece of bread rubbed with garlic and tomato. There is a challenge when cooking seafood to get all the pieces cooked without losing the integrity of the ingredients. Today it was perfect, the mixed seafood consisted of mussels, prawns whiting and calamari. Topped with a bit of parsley and another garlic bread for good measure the dish was favourably commented on and appreciated by members today.

This hard, blended milk cheese is typical of those once traditionally found in many parts of Spain where mixed herds of dairy animals were common, and the ratios of milk type used in cheesemaking constantly altered according to seasonal availability.

The cows’ milk provided the volume, goats’ milk gave the cheese a white colour and lingering piquancy, whilst the use of ewe’s milk provided a rich buttery texture.

Iberico is commonly found all over Spain today and is often substituted for Manchego because of its lower price.

This was served with a mixed salad leaves and some pine nuts.

Our president Nick Reynolds supplied the coffee today single origin El Salvador Himalaya #5 with a flavour probe set, floral with dark fruit notes such as black cherry and plum accompanied by a hibiscus note present in aroma and finish.

Today’s wines were selected by the Winemaster as a special celebration of Ray Healey’s 90th birthday and as an acknowledgement of his time as Winemaster, President, and Life Member of the Society.

As has become our process during the time of Covid-19, the wines were poured prior to people commencing the meal. The difference between appetiser wines, main course wines, and cheese wines becomes blurred with such an arrangement so I’ll deal with the wines in the order in which they were presented.

Our first wine came from Chablis from the plentiful 2018 harvest. The domaine, William Fevre, was established in 1957, and now has vineyard holdings including 12 hectares of Premier Cru and 16 hectares of Grand Cru vines. The Domaine’s fruit is harvested by hand and rigorously sorted in the winery. In recent times the amount of new oak has been cut back and the average age of the barrels is five years. A touch of oak (5-10%, all old) in this wine added to its complexity. Today’s wine had slight elements of citrus with some lime on the palate as well as a delicious peach note, all balanced on the clean acid minerality coming from the Domaine’s Kimmeridgian subsoil.

Our second and third wines both came from Tyrrell’s in the Hunter Valley with similarities of style but also some subtle differences.

First, we had the 2013 Vat 47 Chardonnay. The 2013 Hunter vintage commenced earlier than expected with harvesting starting in mid-January. Crops were down by around a third as a result of a dry growing season, with only 90mm of rain from September to mid-January.

Only three of Tyrrell’s own vineyards are used for the Vat 47 – the HVD (Hunter Valley Distillery) Vineyard which had the original Penfolds clone planted in 1923, the NVC (New Vine Cuttings) Vineyard which has 30-year-old Chardonnay vines and Tyrrell’s Short Flat. These vineyards share a common alluvial soil, which imparts a unique clarity of flavour in the fruit that is grown in it.

A slight whiff of matchstick on the nose pointed to some reductive treatment of the wine during winemaking. Oak, malolactic fermentation and lees work was evident on the nose with pleasant notes of vanilla and toasted brioche. Both nose and palate revealed delicious ripe stone fruit, including peach and nectarine. The wine was well balanced, full-bodied and had a long, slightly bitter, but pleasant finish. For many in the room, this was the favourite white of the day.

The second wine was again a Vat 47 Chardonnay, this time from the 2005 vintage. Like its younger version, this wine was also under screwcap. This wine was a favourite amongst those in the room who like more mature wines. The primary fruit was different from the 2013 vintage, sitting more on the citrus end of the spectrum, with this being most apparent in the bitter lemon finish to the wine. Looking up the vintage report for this year, the weather pattern was one of mild to warm days with unusually cool nights punctuated by rain events that tended to accelerate vine growth and fill out the crop. The normal heat spikes that can occur for the Hunter were limited and followed by cool to mild periods. If anyone thinks that wines cannot age under screwcap, this was a wine to prove them wrong. The full-bodied and well-balanced wine showed delicious honey notes characteristic of aged white wine.

Our next wine was a Society favourite, the 1999 Rosemount Mountain Blue Shiraz/Cabernet from Mudgee. Being under cork, there was some bottle variation and the best bottle was poured on Ray’s table. The age of the wine had turned its fruits into cooked versions of themselves and there was a chocolate note accompanying the rich cooked plum and blackberry compote flavours. The Shiraz was balanced by slightly green notes from the Cabernet giving a delightful, complex, aged red wine.

Being Ray’s birthday, we next ventured into two Red Burgundies.

The first of these was a 2012 Georges Lignier Chambolle-Musigny. The Lignier name is well known in the village of Morey-St-Denis. Georges is the cousin of the better known Hubert and his wines are made in very different style. Although preferring to pick slightly late, there is 80% destemming and a long cold soak before ferment starts. Maturation is 18 months in old oak. Chambolle is renowned for its pretty wines of perfume and elegance. Today’s wine did not let us down. Perfumed dark cherry covered the palate accompanied by elegant fine soft tannins leading into a long satisfying finish. For many, this was the favourite red of the day. Some comments were made on the colour of the wine which seemed almost prematurely brown. Despite this, it is drinking exceptionally well.

The last wine came from Philippe Cheron, a maker with whom Ray has had a long association. Philippe has managed the family domaine since 2011. It is quite small with only five hectares spread over many appellations, as is very common in Burgundy. Unlike Lignier, this domaine retains much more whole bunch and stalk with a longer pre-ferment cold soak (10 days) as well as a long post ferment maceration. Hence a much stronger wine. The lieu-dit of ‘Les Barreaux’ is quite unique. When the original plantings of Vosne Romanée were made by the monks, the area above Richebourg was quite steep and scrubby with shallow, rocky soil. Its subsequent planting, along with ‘Cros Parantoux’, has meant it now has the status of a Premier Cru although still only a village wine. It shares a boundary with the lesser part of Richebourg (which was controversially added in 1924 - its rows run north/south. Most of Vosne runs east/west). Phillipe Cheron’s vines also run north/south. On the shallow soil, the vines do struggle, but they gain great intensity. A slight northern aspect of the vineyard means it retains good acidity.

Today’s wine was a 2012 Vosne Romanée “Les Barreaux.” This was a much deeper coloured wine than the Lignier with much more intense flavours as well, this time on the red fruit spectrum with cherry and redcurrant in the foreground. The tannin structure was complex and fine although there was a slight element of greenness, most likely coming from the whole bunch treatment and its associated use of stalks. Although the wine was exceptionally well balanced at this stage, it was quite likely opened too early in its evolution. This will be an interesting wine to look at in a few years’ time.

Being Ray’s birthday, he brought along a truly unique wine for us to try with the cheese. The wine was a 1991 Augustine Aleatico from Mudgee. This grape is one that Ray has long been interested in and the wine was one that he was involved in making.

Aleatico is a somewhat rare and obscure Tuscan grape that has migrated South in Italy and is used to make a sweet, grapey red wine on the island of Elba. Jancis Robinson’s Wine Grapes states that DNA tests show that Aleatico is either a parent or progeny of Muscat Blanc à Petits Grains.

The Augustine Aleatico came from the Settler’s Creek Vineyards in Mudgee from vines brought to Australia in the early 1920s by Dr Fiaschi, a war-hero surgeon and winemaker.

A sweet wine, it had an almost Rutherglen Muscat note on the nose with date, fig, and raisin. On the palate, it was far from fortified, with 11.4% alcohol and floral notes highlighting its relationship with Muscat accompanied by the dried fruit apparent on the nose. A delicious treat of a very rare Australian wine.