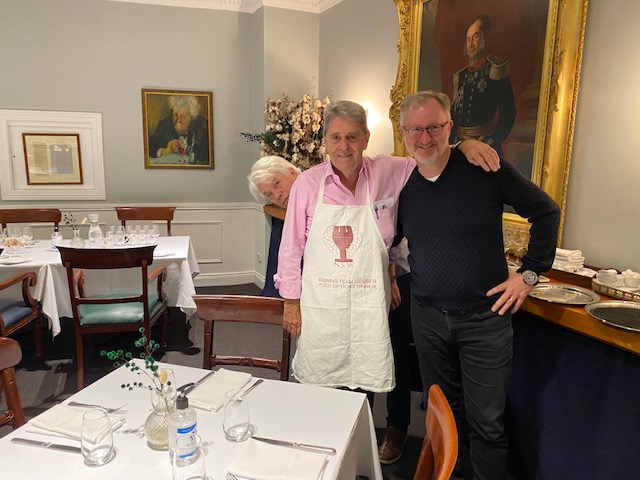 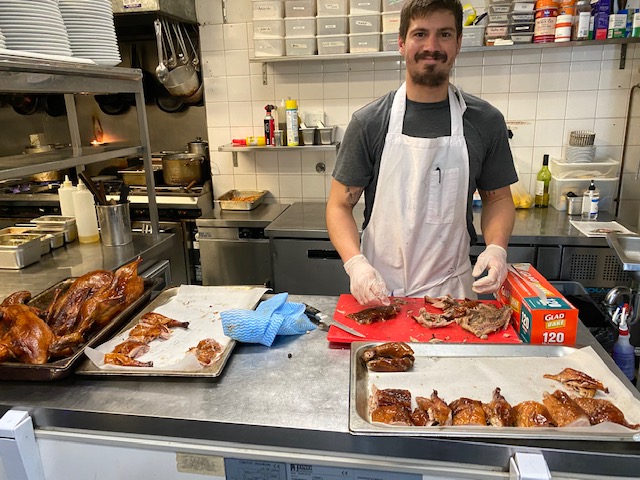 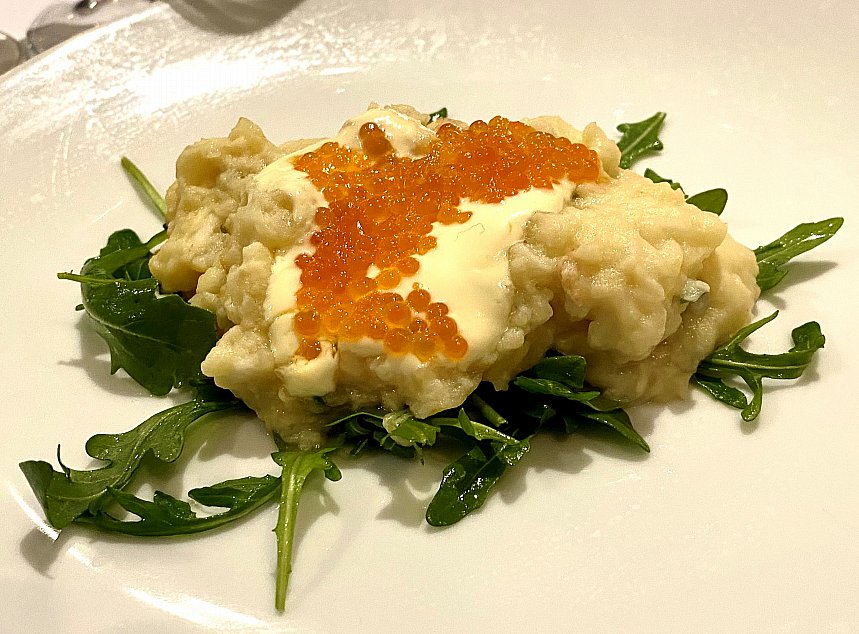 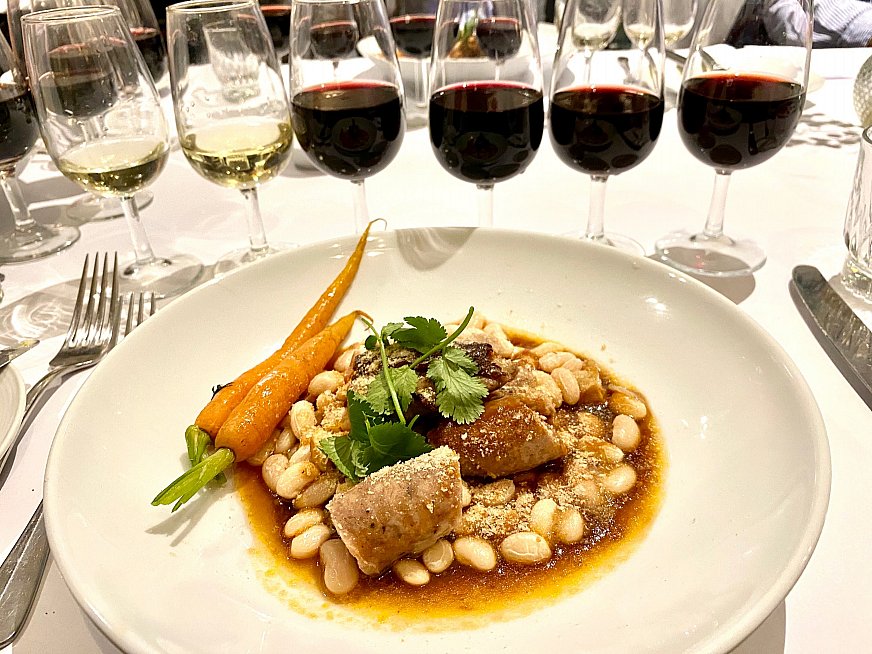 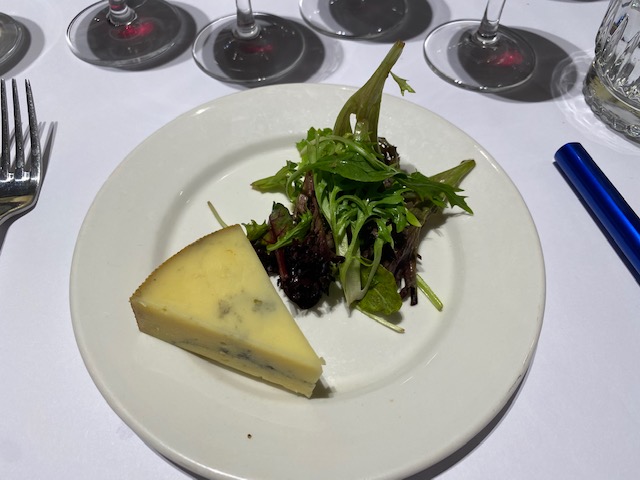 One thing that can be said about our Chefs of the Day is their dedication to providing meals for their fellow members.

Today Gary Patterson cooked and delivered the food to the Royal Exchange Club, despite being unable to attend himself.

Meals cooked by Gary are always an adventure and today’s lunch was no exception.

Because Gary wasn’t at the lunch, cooking and plating were undertaken by the Royal Exchange Club’s chef, Leo Rachid. He was ably assisted by two members who we don’t normally associate with the kitchen, Paul Panichi and James Healey. After today’s performance, we certainly hope to see them back in the kitchen.

Gary’s entrée was billed as a crab cake. After inspecting the product, Leo worked his chef magic on it presenting us with a crab and potato mornay served over rocket and topped with salmon roe.

Although not a crab cake, it was enjoyed by members who commented favourably on the dish.

The main dish was advertised as a Cassoulet and although it had all the elements of a Cassoulet, it presented differently from our normal experience of that dish. The duck that Gary acquired for the meal came from a Marrickville restaurant popular with a number of members, BBQ Prince. Typical of Chinese duck, it was redolent with five-spice, which added an unusual note to this French dish. In his comments on the dish, James Hill called it “Hong Kong Cassoulet,” which was probably an accurate assessment.

The duck was accompanied by extremely flavourful Toulouse sausages, which normally don’t have five-spice but somehow the star anise had penetrated them during the cook.  The dish was accompanied by perfectly cooked Dutch Carrots and an interesting toasted bread crumb which added texture to the dish. Although texture was probably not needed as the beans were masterfully soaked but not cooked sufficiently. They gave the general impression of eating raw unroasted peanuts, again fitting perfectly the emergent Chinese theme of the meal.

James Healey is actively working to present Australian cheese during the COVID-19 lockdown and today he presented us with a cheese called Fermier, which is made in Mortlake Victoria by the producer L’Artisan. The maker is Matthieu Megard, a third-generation cheesemaker, who grew up in the French Alps and after moving to Australia set up his own dairy and cheesery with the aim of sharing the cheeses of his childhood with Australians. The cheese is a semi-hardened, smear-ripened cow’s milk cheese reminiscent of the classic Morbier cheeses of Jura with their ash layer in the centre.

The cheese was nutty in flavour with a smoky finish and was mistaken by a number of members as being European in origin with the ash being misinterpreted as being a blue mould.

Today’s coffee came once again from Ona Coffee, Marrickville. From El Salvadorean beans, the Filter Coffee was called Divisadero, Honey. The ‘Super Honey’ beans from Ataco, El Salvador when roasted had notes of malt, chocolate truffle, and a hint of cacao. The roaster presented it as a Mars Bar in filter coffee form.

The day was enjoyed by all and the President closed the lunch with the suggestion that people maintain social distance on their way home, not only because of our current circumstances but also due to the aromatic effects that beans such as those eaten today can have.

Today’s entrée was matched with a pair of 2013 Rieslings. Drawn from SA’s best two regions for the variety, the differences didn’t stop there. They represented two very diverse approaches to the winemaking. The Pewsey Vale from Yalumba was in a bigger style, showing fresh acidity and a depth and mouthfeel derived from natural fermentation. The Jim Barry from their Lodge Hill vineyards was much more restrained. It still showed pure citrus fruit with a zippy acidity. Probably won’t improve much over time as it develops more buttered toast characters.

The pair of 2010 Shiraz were again in a very different mould. The Kiss Shiraz from Andrew Thomas still showed obvious cedary oak with bright red berry fruit. The palate was beautifully weighted with a certain mineral element. The tannins on the palate we’re a little hard on the finish. Still a young wine and an excellent example from a difficult vintage. The No. 1 Shiraz can be traced back to the first Saltram vintage in 1862. From a very good year, it showed very much in the TWE house style with a perfect harmony of fruit, oak and tannin. Another wine that will accept more time in bottle, although it perhaps lacked energy and a little boring.

With the cheese came more Shiraz, but this time with more age. First was a 2001 Vasse Felix Shiraz. This was drawn from their Wilyabrup vineyard. The Shiraz vines are the oldest in Margaret River, having been planted in 1967. Although under crumbling corks, it surprised by its freshness and recognisable varietal bouquet. Still showing oak and tannin, it was an excellent example of the keeping qualities of the region.

The final wine for the day was a 1993 St Hallett Old Block Shiraz. A wine that was first produced in the early 1980s, it was originally drawn from a very old block near the winery. It must be said that just because vines are extremely old, they don’t necessarily make the best wine. St Hallett resolved such was the case with Old Block. Although still sourced from old vines, it no longer comes from the original block. Instead, fruit is from vineyards in both Eden Valley and Barossa Valley. Again lousy corks and again the wine was holding together. Past its best, but still bright and certainly on style. A few rancio oak notes and the recognisable ripe Barossa fruit.