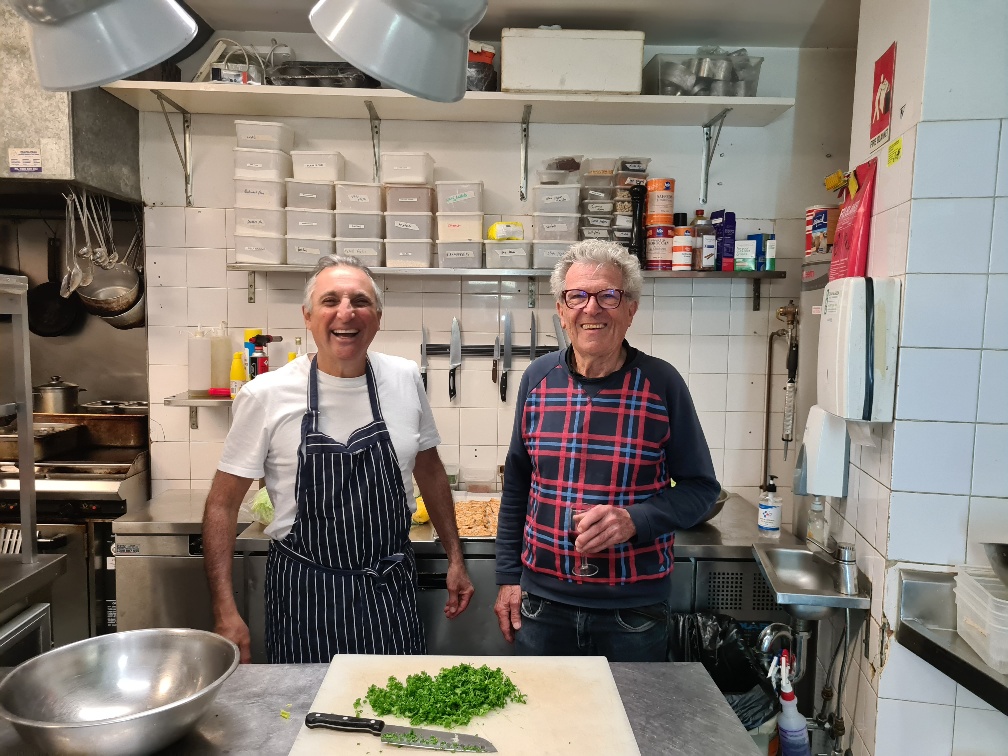 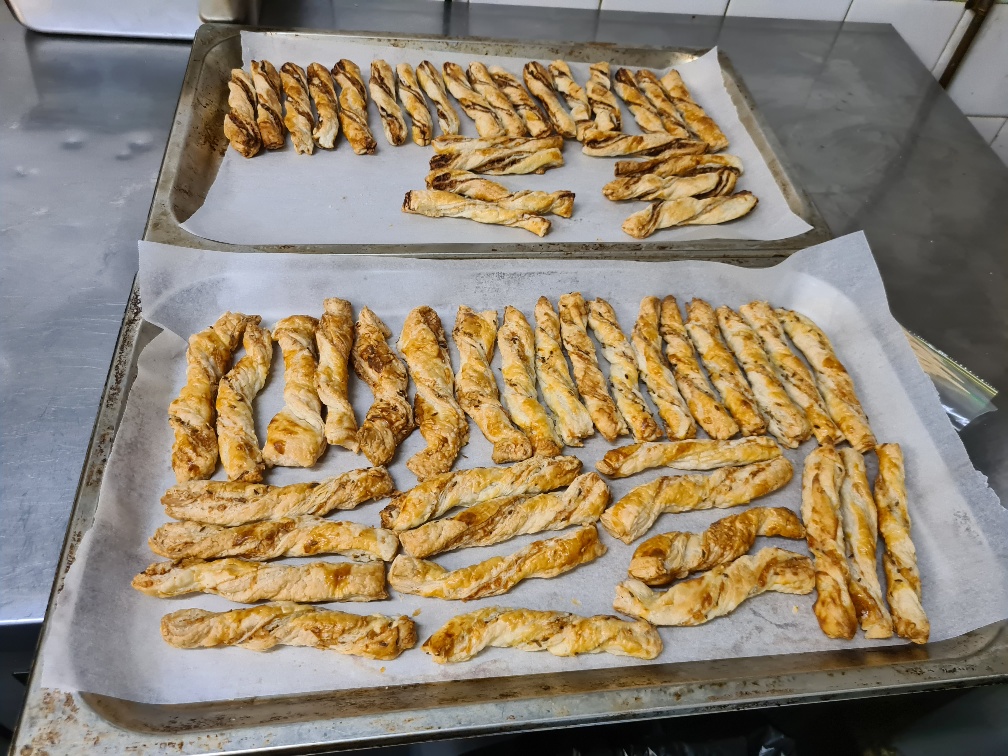 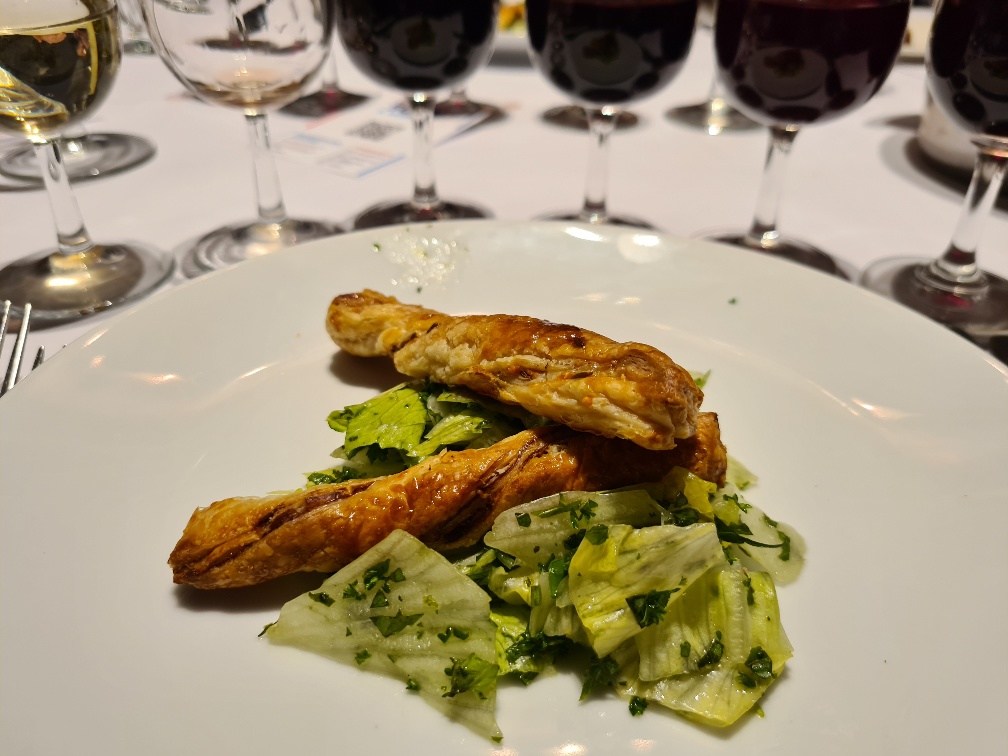 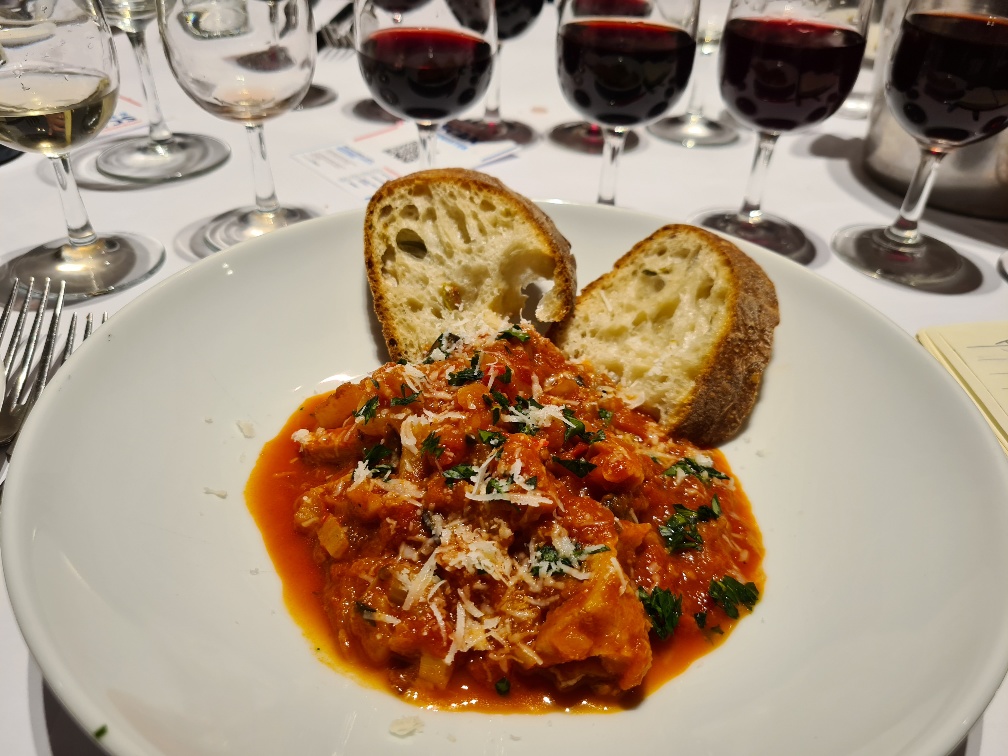 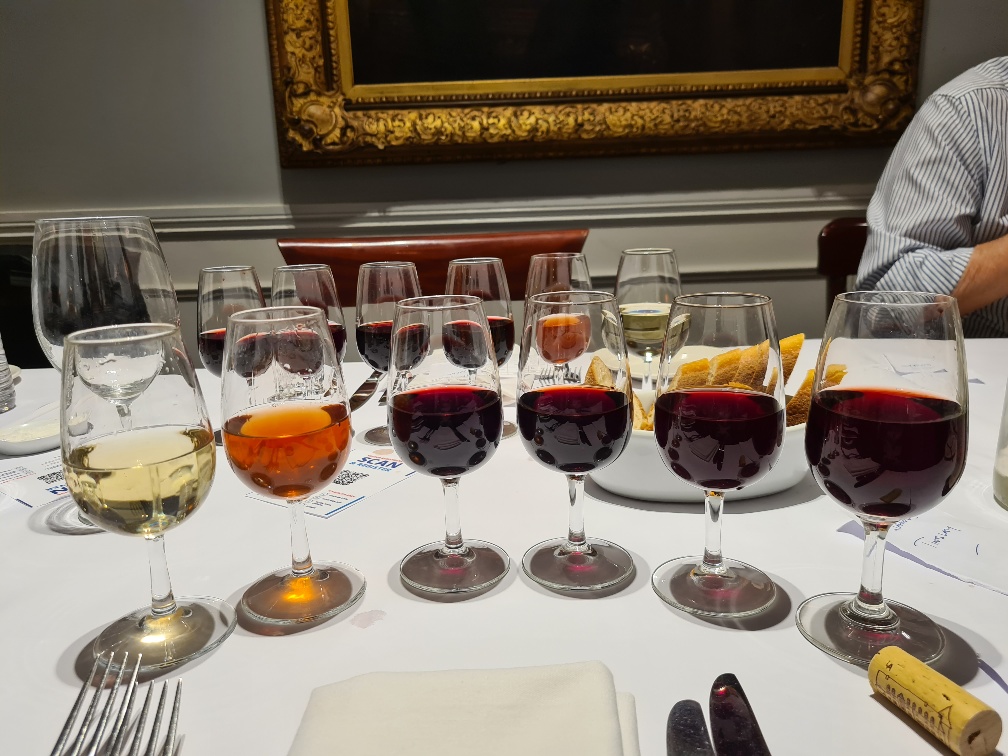 In what was probably a unique successive pair of lunches, our Chef of the Day this week, Hal Epstein, prepared the lunch but was unable to attend in person, except very briefly to be with the Foodmaster in the kitchen to explain the meal. [It was Gary Patterson last week who found himself in similar circumstances.] After that Bill Alexiou-Hucker took over the duties of the day.

Being seated complying with our pandemic provisions we were served two filo pastry pieces or ‘cheese twirls’ on our plates. The first had flavours of Middle Eastern spices and turned out to be cumin, while the second one was a surprise as Hal had used Vegemite as the flavouring agent. Both were very tasty and went with the dry Italian whites selected by our Winemaster.

The main course was a boon for the lovers of tripe and as we found out during the booking period many cannot face that particular piece of meat. There was a good representation from the tripe club attending lunch. Some members had not recently eaten tripe having had their mothers tripe meals many decades ago curb any interest.

Osteria Oggi is a hatted restaurant in Adelaide that is lauded for creative, produce-driven food and Hal reproduced one of their classic dishes which has also been featured on the SBS cooking program The Chef’s Line, tripe with fennel and tomatoes

The tripe had a great texture which absorbed and carried the flavours of the ingredients. The comments were very complimentary even from non-tripe eaters.

The cheese presented today by James Healey was a new one for many of us, L’Amuse Brabander. The cheese was almost porcelain white and was, James explained, a goats milk Gouda but a lesser-known variety made near Amsterdam since the early 1800s. The cheese was very flavoursome and maintained a degree of moisture but there was still some form of crunch on the palate. A most unusual Gouda.

The cheese was accompanied by quince paste and homemade (by Hal) marinated kumquats served on a tiny skewer. A classy match.

Coffee was sourced by the President, once again from the ONA stable. This selection was named The Hitman and it had a higher roast than in previous weeks. It is described as “a bold, full-bodied comfort coffee flavours of caramel, malt, nut and spices.”

Today’s entrée wines started the theme of Italian varietals. A bright, fresh 2018 Bisci Verdicchio was new to many of the members. Perhaps Riesling like in its citrus notes, it had a texture more identified with Pinot Gris. This was paired with a 2017 Scorpo Pinot Grigio from the Mornington Peninsula. Australia’s best-known region for the variety, it was made in a very different style to most from the area. Fermented on skins and aged on lees, it had some colour, phenolics and oily texture. An excellent example of the hipster style.

A pair of exciting Tuscan reds accompanied the exciting main course. First, a 2012 Isole e Olena Cepparello interestingly closed under screwcap. Formed in the early 1950s on the purchase of the adjoining Isole and Olena vineyards but the De Marche family. A 100% Sangiovese wine, when first produced it was required to be labelled an IGT because at that time Chianti was required to contain 10% to 30% Malvasia and Trebbiano. While the DOCG laws have changed Cepparello is still labelled IGT. It showed a wonderful savoury, cherry aroma with a rich, but elegant palate finishing quite firm. A delightful wine.

The 2009 Antinori Pian delle Vigne Brunello di Montalcino expressed a very different style of Sangiovese. Originally the red variety around Montalcino was labelled Brunello. Later ampelographical work has shown it to be Sangiovese Grosso. The locals, however, continue to call it Brunello. The DOCG requirement for this wine demands 100% Sangiovese, ageing in oak for a minimum of 2 years and then 4 months in bottle before release. The Pian delle Vigne is a large vineyard acquired by the Antinori family in 1995, so this is a wine with not a lot of history. Nonetheless, it is one of the best-regarded of the Brunellos. Antinori has wisely chosen to age their wine in large oak. This avoids the overdeveloped characters seen in many from the region and a, loss the fruit to shine through. This was from a hot year, so shows a lot of ripe notes yet very soft tannins. The room was split half and over these 2 excellent reds. Some preferring the softness of the latter while others leaned to the fruit drive of the former.

The cheese wines were a pair of Tyrrell’s 4 Acres Shiraz. This vineyard was planted by Edward Tyrrell in 1879 and is one of the company’s nominated sacred sites. They note that “these vines are some of the oldest and rarest not only in Australia but also the world, all because the Hunter Valley never had phylloxera.” The wines are generally aged in large vat to preserve the aromatics. Today’s vintages tasted were 2005, which showed a little fruit development and some hard tannins, and 2011 which was still too young and consequently a little firm.