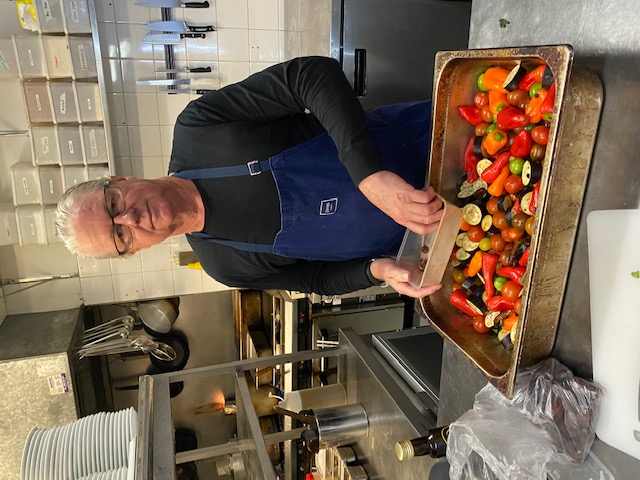 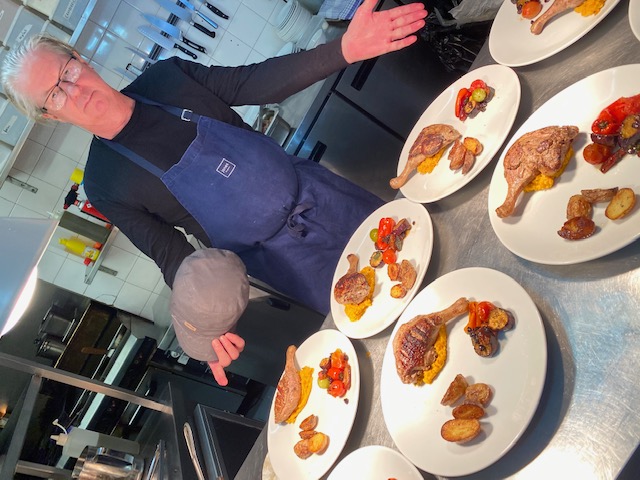 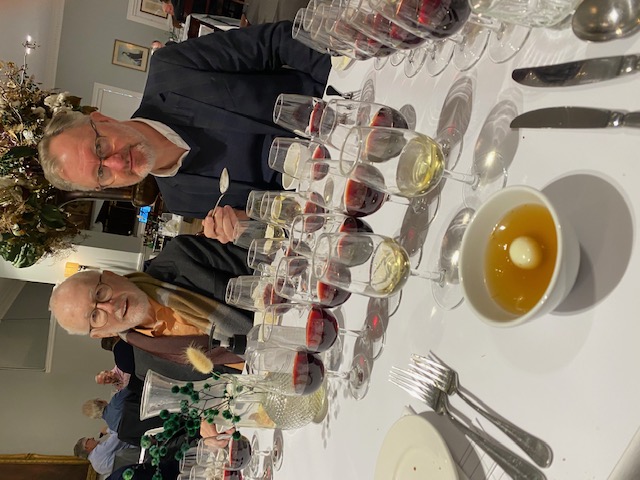 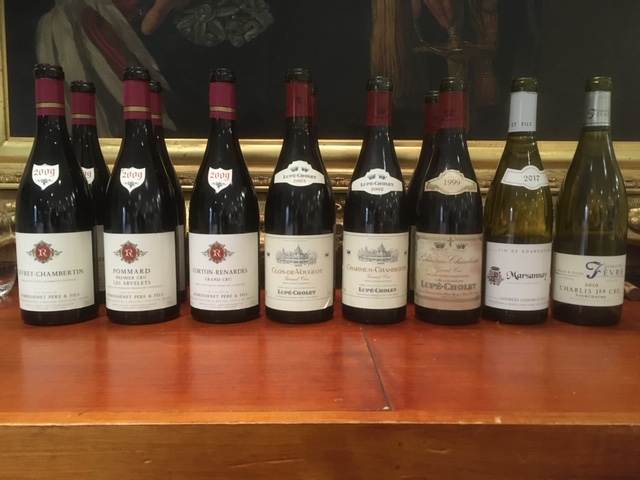 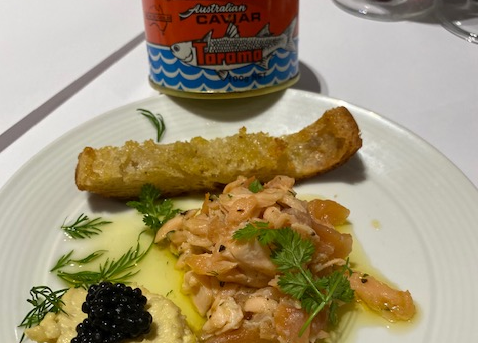 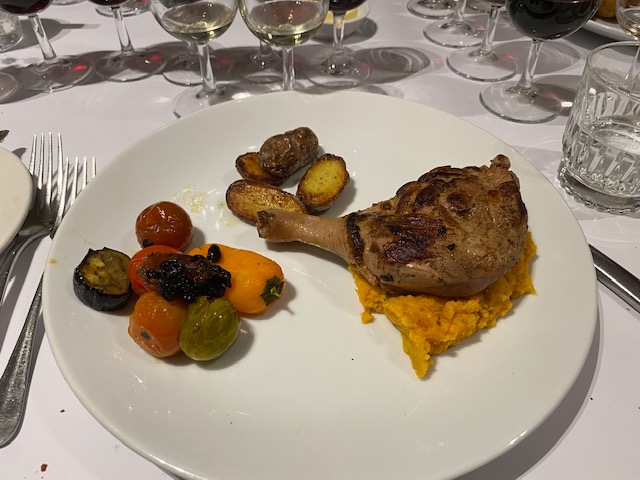 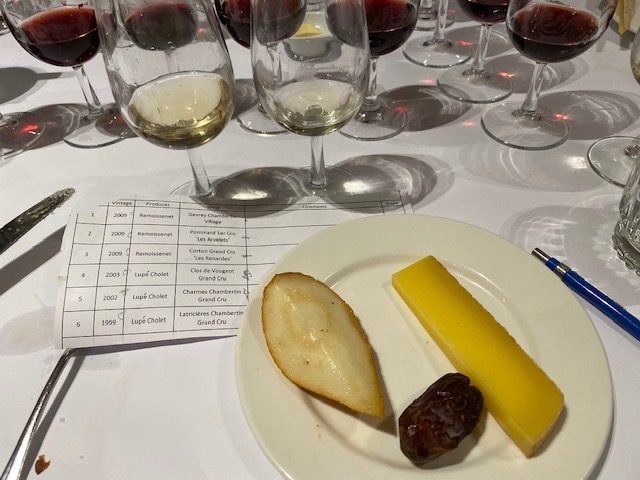 We welcomed Paul Thorne back to the kitchen as chef of the day for our wine tasting lunch. He was assisted by James Hill.

First served was a plate consisting of salmon rillette and taramasalata.

The salmon rillette is a Philippe Mouchel recipe where a salmon fillet is cooked for 15 minutes then mixed with an equal amount of diced smoked salmon then lemon juice, dill and cream added and then left to marinate overnight. It is served with chervil.

A good complex flavoursome entree matched on the plate with a portion of taramasalata topped with Avruga caviar. The tarama was a good contrast to the rich smoky oily of the rillette with a strong lemon taste. The tarama is made with sourdough breadcrumbs and, as a side, the crust was baked in the oven and served with our entree.

Paul’s renowned for his consommé and today he didn’t disappoint it was a clear duck consommé a smidge of orange zest and a quail egg for good measure. The good robust flavour of duck was enhanced by the zest and then a mouthful of quail egg to further enjoy.

Paul nominated duck as to match our Burgundian wine theme.

Duck Maryland was cooked ‘sous vide’ then seared on the hot plate in the kitchen rested then kept warm in the oven.

It was well cooked pink, moist and full of flavour and accompanied by some duck fat roasted kipfler potatoes. We normally see duck Maryland cooked confit it was good to try this variation.

We also had compote of tomato, eggplant and baby peppers roasted in olive oil to counter the acid of the tomatoes Paul added some dates and black currants. A good well-balanced flavoursome dish that could stand alone.

The duck sat on a mash of carrot and cauliflower, the art world talks of colour and movement and we saw this on the plate today. Frank suggested the mash was there to stop the duck from walking away!

Our Cheesemaster, James Healey, on theme, presented La Couronne du Comte AOP, an unpasteurised milk cheese matured in the damp underground cellars of Marcel Petite at Fort Saint Antoine high in the mountains that border France and Switzerland in the Franche-Comte region. It has a rich concentrated nutty texture elegant, caramel sweetness and lingering flavour.

The cheese was accompanied by a half Packham pear and some Californian dates. A good match.

Our coffee was sourced by Nick from the Ona stable, a Roasters Selection Castillo is a blend of Colombian Castillo and is packed full of fruit. On the first sip, you notice notes of orange and mixed berries and as the brew cools down these fruit notes are accompanied by a praline like sweetness.

For today’s wine lunch the cook of the day said “duck” and the wine master said Burgundy. So, we started with a couple of Chardonnays for the entrée course. The first from Georges Lignier was a 2017 Marsannay Blanc. It’s not a renowned appellation for Chardonnay as it is at the northern end on the Côte de Nuits, almost into the suburbs of Dijon. The wine was still young but lacked the intensity and tension seen in the Côte de Beaune Chardonnays. Perhaps a little too much oak and not enough texture at this stage.

The Chardonnay that followed was a 2010 Chablis 1er Cru ‘Fourchaume’ from Domaine Nathalie et Gilles Fèvre. Not to be confused with the renowned and large Domaine William Fèvre, they still have significant vineyard holdings and family history in the region. The 2010 vintage was difficult in Chablis (the first of many to come in the decade) with a miserable spring and cool summer. The low yields allowed fruit ripeness, but harvest was not until late September, early October. Today’s wine was still fresh and lively. It is the only premier Cru wine that the domaine does not put in oak and this has helped this wine age gracefully. Nonetheless, the fruit aromas and flavours were showing some development with a hint of “apricot” botrytis - not uncommon in Chablis.

With the duck (and cheese) we had 6 red burgundies from 2 producers. The first 3 were a mini bracket of 2009 vintage Remoissenets. To start, a village Gevrey-Chambertin showed bright cherry fruit though perhaps lacking in depth and texture. Its tannins had softened with time and was very approachable. The Pommard 1er Cru “Les Arvelets” was in great condition. This site is up above the village with some of the steepest slopes of the commune. It was a wine of great elegance, but with some of the famous Pommard power and tannin of the wines from the deeper soils to the south. The third wine was the first of four Grand Cru, this one from the Corton vineyard of “Les Renardes” towards the top of the slope on the northern border of the commune of Aloxe Corton. The wine was quite delicious. It had great intensity with beautifully expressed red fruits. A slightly robust wine with length, balance and complexity.

Next followed three Grand Cru red burgundies from Domaine Lupé-Cholet. The 2003 Clos Vougeot was a little disappointing. This climat is about 50 ha with a great diversity of soil, aspect and drainage. It is the largest single grand cru vineyard in burgundy and is probably drawn into this one Cru by the wall built around it in the 14th century by the Cistercian monks. They lost control soon after the revolution in the early 1800s which the church estates were all sold. It now has about 80 different owners. The best parts are in the south-west corner at the top of the hill near the great Échezeaux vineyards. The bottom third of the vineyard is in low lying ground below the level of the N74. Of interest is that majority of the vineyards in this line to the north and south are only classified as village. The Lupé-Cholet vineyards are on some of the flatter ground at the southern end. The 2003 harvest was memorable because of the heat of August and probably shows some impact of this weather extreme. It was a little jammy in its fruit profile, quite oaky and with very soft tannins to finish.

The two Gevrey-Chambertin Grand Cru wines that followed were both exceptional in their own way. The Charmes-Chambertin vineyard sits directly to the south of its more famous neighbours of Chambertin and Clos de Bèze. This 2002 wine was from a great vintage and showed beautiful Pinot Noir perfume with a subtle and astute overlay of oak. On the palate, there was a wonderful mouthfeel and length with surprisingly soft tannins. The 1999 Latricières-Chambertin (the next one south from Charmes) was a bit of a sleeper. It was poured last on the suspicion that it might fall over. However, after a slight dip, it continued to open throughout the afternoon. From a slightly hot and low acid vintage, the wine showed a glorious fruit expression of ripe berries with a fine flavour that lingered long in the mouth. It was full-bodied and textured with depth and energy at its core and structuring tannins. Although the Latricières-Chambertin is one of the smaller and lesser-known of the Grand Crus, it certainly was the standout of the four.

Another great day enhanced by the extraction of 18 corks with no TCA.