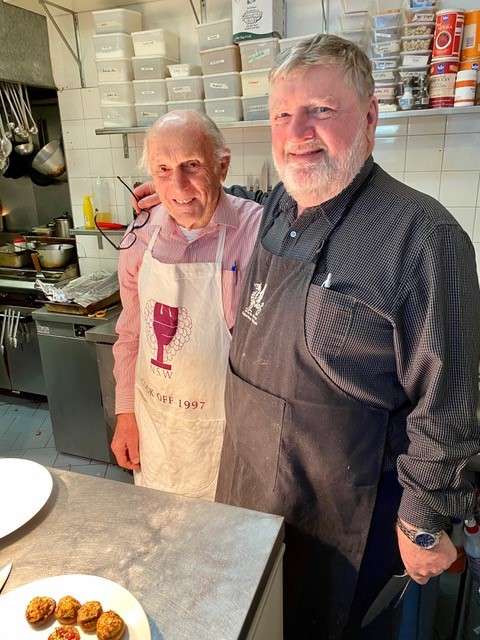 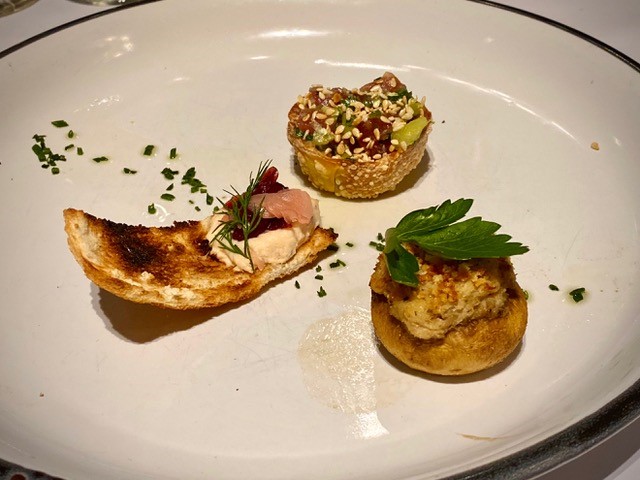 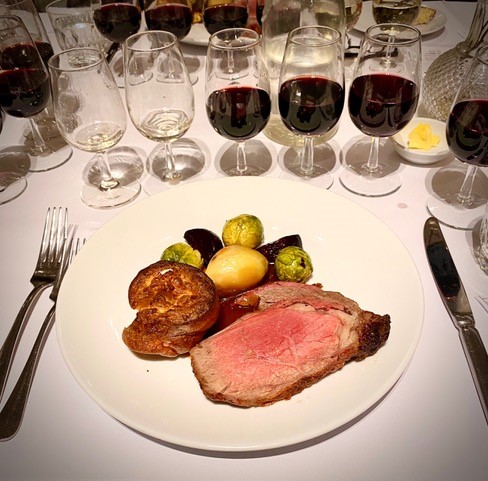 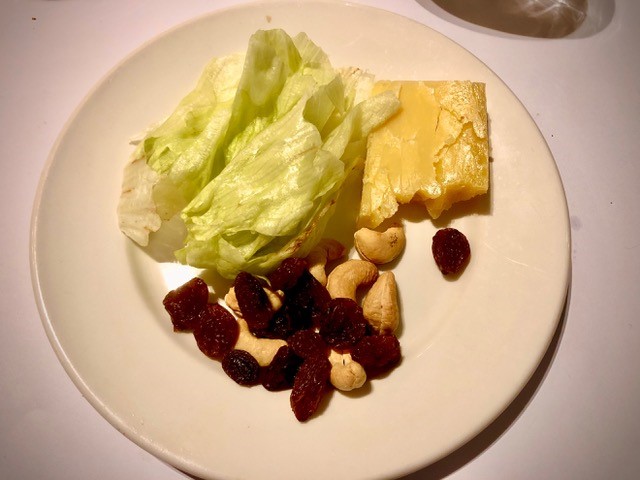 It’s not a question you hear often but it was asked of our chef of the day. His reply: add one.

On Tuesday we had the honour of having our lunch prepared by the society’s second oldest member, World War Two Veteran Peter Manners.

And what a lunch it was.

Peter has been watching all the new styles of cooking and different nationalities of the dishes prepared and decided to go back to good old basics from his English heritage.

Today we were served one of the best Roast beef with Yorkshire pudding meals that I have ever had. On my early arrival, Peter was wandering around wondering what to do because everything had been prepared and was ready to go. The pieces of beef looked fantastic before cooking and were even better when cooked to a perfect level of doneness. The Yorkshire pudding was crisp and light and the gravy, a perfect accompaniment although a number felt that there wasn’t enough. Accompanying vegetables were potato, beetroot, and brussels sprouts. The latter vegetable was perfectly prepared according to those who sampled them but some of us were not up to what can be a challenging for some cruciferous vegetable. Peter told us that its use was seasonal in the UK, with it appearing when available but replaced by green beans when it wasn’t.

The meal was substantial on meat (a Society preference), perfectly prepared and presented, extremely tasty, and acclaimed by all commentators.

A number of diners asked where Peter had sourced the meat. His answer was Coles Balgowlah but being Peter, he gave us the full story that he had been talking to the butcher there for a number of weeks leading up to the final purchase and the butcher had taken a close personal interest in sourcing the best meat for Peter. He succeeded.

Leading into the meal, we had the first appearance in the kitchen by Steve Sparkes since he became a member. The appetisers all involved fish and were sufficiently challenging to our palates for some to voice that they preferred some over others. Notably, however, everyone found at least one that they savoured.  Steve presented smoked rainbow trout with ginger on melba toast, which was perfectly curled and extremely well seasoned. A second appetiser, which challenged a few, was a heated button mushroom with crab and cream cheese filling seasoned with salt, pepper and a pinch of cayenne. Some didn’t like the texture of the mushroom but if you were familiar with and like textural Chinese food, it was very enjoyable. The last appetiser was a wonton wrapper baked as a pastry shell with sashimi-grade tuna, Asian condiments, sesame seed, and a touch of chili.

The quality of the appetisers and their visual appeal was commented on very favourably and we look forward to seeing what Steve produces when he is the Chef of the Day next month.

In theme with the British main course, we were presented with Quicke’s Cheddar. The Quicke family have produced this cheese for almost five hundred years and their expertise shows. A perfect cheddar came to the table with a good crumbly texture and strong flavour. Peter accompanied it with sultanas, unsalted cashews and an iceberg lettuce leaf.

The coffee, which came from Ona Marrickville, was an El Salvador Himalaya coffee, which the roaster called “Supersonic.” The special natural processed coffee has a powerful flavour profile, ranging from red cherry and raisin to hibiscus and dark chocolate.

A pair of Chardonnays were in the table today to accompany our entree. Both could be described as newer style as they showed the recognisable flint, struck match notes of wild (natural) fermentation. The 2017 Collector Wines Tiger Tiger Chardonnay from Tumbarumba was a very elegant, refined style. It showed good minerality with grapefruit characters and excellent length. The 2017 Tapanappa Piccadilly Valley Chardonnay on the other was quite big with fruit more in the peach/melon spectrum and a rather sharp acidity pulling up the finish.

Two Cabernet-based wines were served with the main course. From Margaret River and Coonawarra, both were still in very good condition with their regional characters to the fore. The 2007 Devil’s Lair Cabernet (81%)/Merlot (19%) was still young and bright with aromas of red currant and cedar oak. The palate was quite vigorous with red and black fruits finished by dry, grainy Cabernet tannins. The 2002 Zema Estate Cabernet had again retained freshness, although it might have presented better under screw cap. This time fruit aromas were more chocolate and mint and again complemented with quality oak. Starting to show its age on the palate the flavours were complex with soft tannins.

Cheese wines were another pair, this time Tyrrells Vat 9 Shiraz. Both showed amazing colour and clarity with no hints of browning. The 2011 was a little reduced which tended to suppress the fruit and leave a certain hardness on the finish. Still a very young wine. The 2007 was obviously more evolved and softer. Perhaps a little green with some reduction and softening tannins. More approachable and peaking.