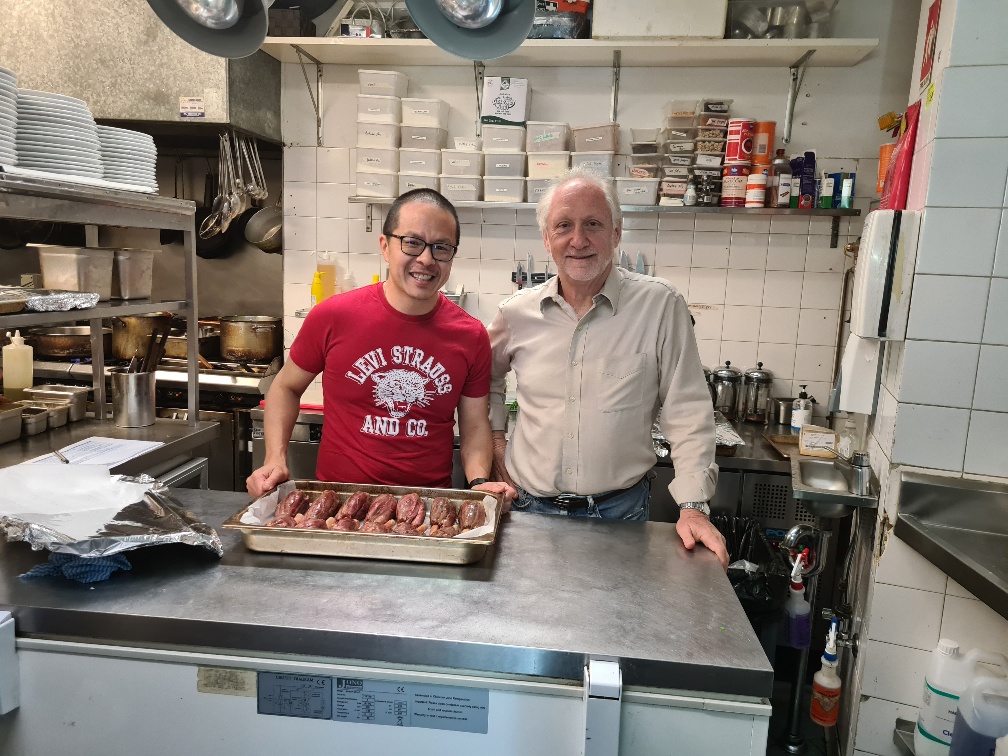 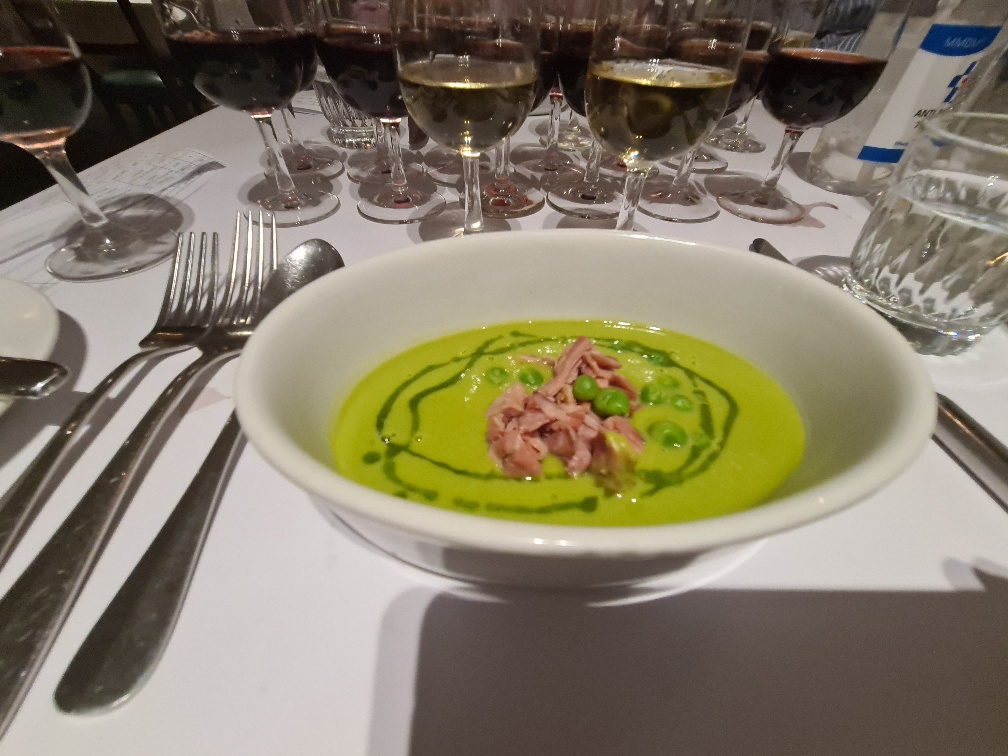 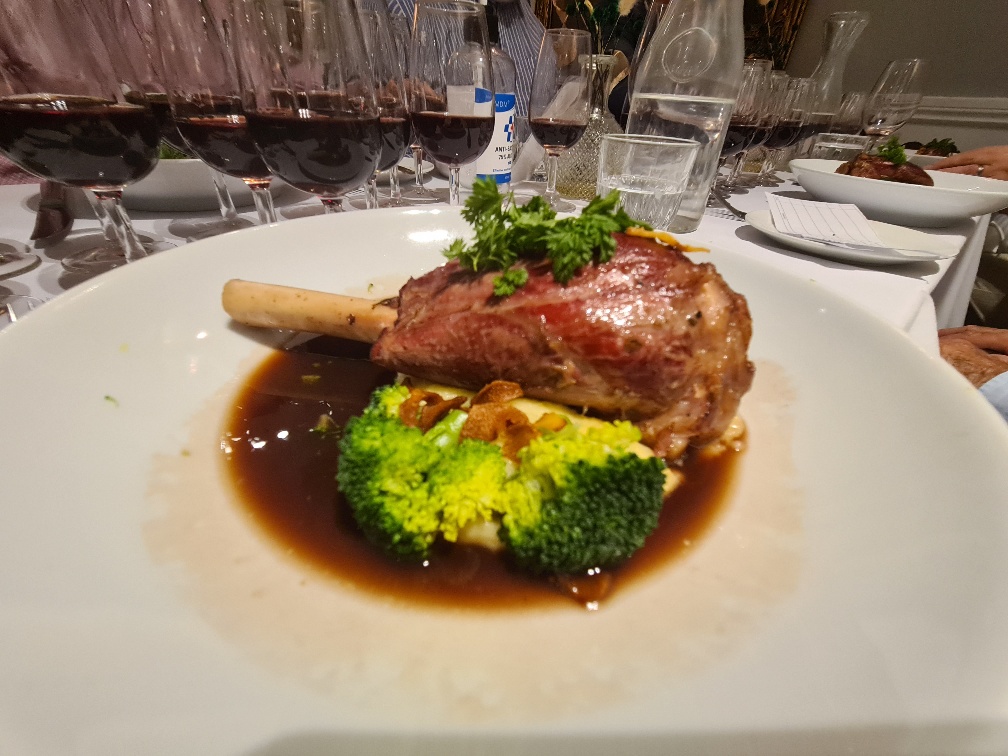 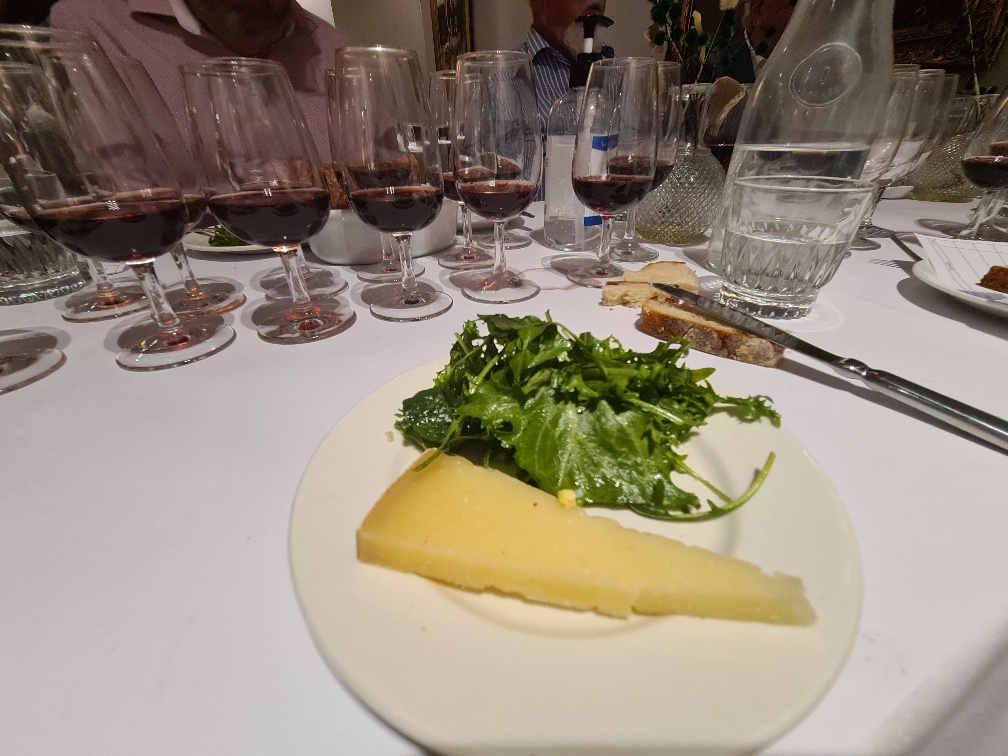 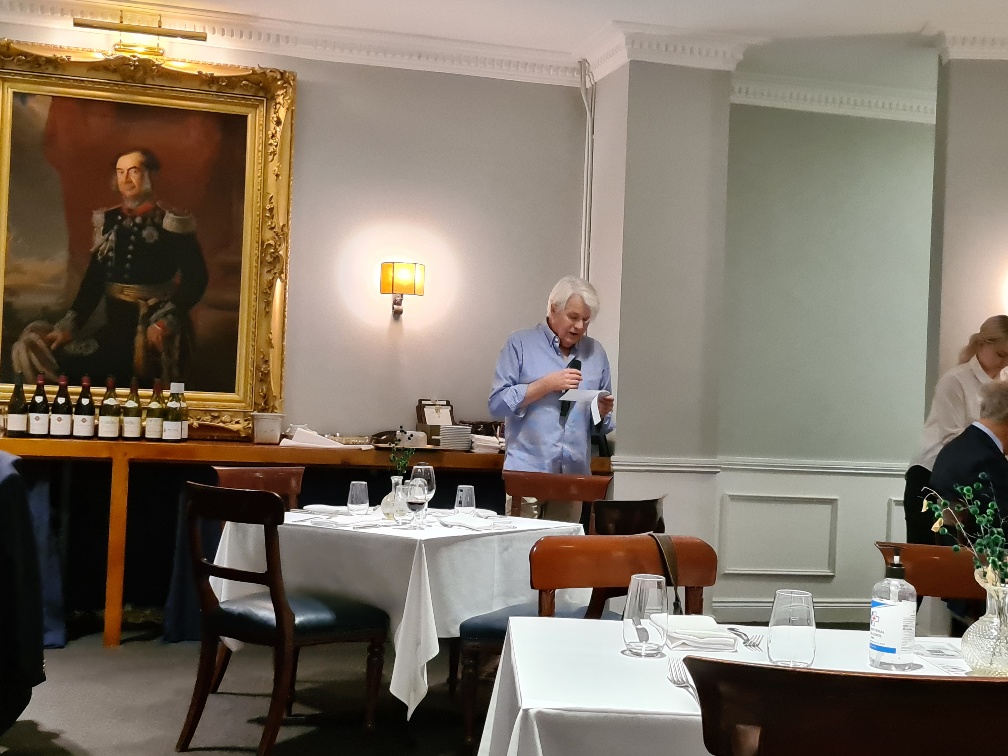 Bernard Leung was in the kitchen today as a first-time Chef of The Day for our Society. He was assisted by Steve Liebeskind.

We started with a stunning looking pea and ham soup which Bernard had based on a Heston Blumenthal recipe. The basis of the soup was a six-hour slow-cooked ham hock stock which had a noticeable depth of flavour to this starter. The soup was topped with shredded ham hock. It looked good and tasted good.

This was followed by lamb shank which had been sou vide medium-rare at 62°C for 40 hours. Whilst the meat came off the bone beautifully, it was not the messy “falling off” effect you often get with oven slow cooking. The stock was based on beef bones and then combined with reduced red wine. The meat was accompanied by parsnip crisps (which were delectable) and broccoli set on mash. There were a couple of comments from the very satisfied attendees that it was good to have a good quantity of sauce so that it could be enjoyed until the last of the meal was eaten. Over the past few years, there have been numerous comments that the meal was good, but more sauce was needed. Well done Bernard.

Our Cheesemaster was on a NSW road trip but selected and organised the cheese which was a favourite, Ossau Iraty. This French Basque country cheese is generally aged from 80 to 120 days and is sheep’s milk. The importer in this case was one of our regular suppliers, Will Studd. Whilst this cheese is described a semihard ours was a little more on the hard side but had developed intense flavour due to the slightly mature age. It is often described as fruity, herbaceous and nutty. Today’s cheese was a fine example of the style. It was accompanied by a simple salad.

Coffee was from ONA by the President and was washed Guatemala El Socorro. It is described as having aromas of green apple and caramel accompanied by hazelnut-like notes and a persimmon quality on the finish.

I am sure that our Foodmaster will ensure that Bernard has another lunch lined up for 2021.

We started with a couple of Chardonnays for the entrée course. The first from Georges Lignier was a 2017 Marsannay Blanc. It’s not a renowned appellation for Chardonnay as it is at the northern end on the Côte de Nuits, almost into the suburbs of Dijon. The wine was still young but lacked the intensity and tension seen in the Côte de Beaune Chardonnays. Perhaps a little too much oak and not enough texture at this stage.

The Chardonnay that followed was a 2017 Domaine Etienne Boileau Chablis 1er Cru Montmains. Most thought the classic Chablis structure of a well-balanced acid structure was superior to the Marsannay. The stony mineral backdrop. with a dry refreshing finish with a crisp acidity was superb.

With the duck (and cheese) we had 6 red burgundies from 2 producers. The first 3 were a mini bracket of 2009 vintage Remoissenets. To start, a village Gevrey-Chambertin showed bright cherry fruit though perhaps lacking in depth and texture. Its tannins had softened with time and was very approachable. The Pommard 1er Cru “Les Arvelets” was in great condition. This site is up above the village with some of the steepest slopes of the commune. It was a wine of great elegance, but with some of the famous Pommard power and tannin of the wines from the deeper soils to the south. The third wine was the first of four Grand Cru, this one from the Corton vineyard of “Les Renardes” towards the top of the slope on the northern border of the commune of Aloxe Corton. The wine was quite delicious. It had great intensity with beautifully expressed red fruits. A slightly robust wine with length, balance and complexity.

Next followed three Grand Cru red burgundies from Domaine Lupé-Cholet. The 2003 Clos Vougeot was a little disappointing. This climat is about 50 ha with a great diversity of soil, aspect and drainage. It is the largest single grand cru vineyard in burgundy and is probably drawn into this one Cru by the wall built around it in the 14th century by the Cistercian monks. They lost control soon after the revolution in the early 1800s which the church estates were all sold. It now has about 80 different owners. The best parts are in the south-west corner at the top of the hill near the great Échezeaux vineyards. The bottom third of the vineyard is in low lying ground below the level of the N74. Of interest is that majority of the vineyards in this line to the north and south are only classified as village. The Lupé-Cholet vineyards are on some of the flatter ground at the southern end. The 2003 harvest was memorable because of the heat of August and probably shows some impact of this weather extreme. It was a little jammy in its fruit profile, quite oaky and with very soft tannins to finish.

The two Gevrey-Chambertin Grand Cru wines that followed were both exceptional in their own way. The Charmes-Chambertin vineyard sits directly to the south of its more famous neighbours of Chambertin and Clos de Bèze. This 2002 wine was from a great vintage and showed beautiful Pinot Noir perfume with a subtle and astute overlay of oak. On the palate, there was a wonderful mouthfeel and length with surprisingly soft tannins. The 1999 Latricières-Chambertin (the next one south from Charmes) was a bit of a sleeper. It was poured last on the suspicion that it might fall over. However, after a slight dip, it continued to open throughout the afternoon. From a slightly hot and low acid vintage, the wine showed a glorious fruit expression of ripe berries with a fine flavour that lingered long in the mouth. It was full-bodied and textured with depth and energy at its core and structuring tannins. Although the Latricières-Chambertin is one of the smaller and lesser-known of the Grand Crus, it certainly was the standout of the four.

Another great day enhanced by the extraction of 18 corks with no TCA.