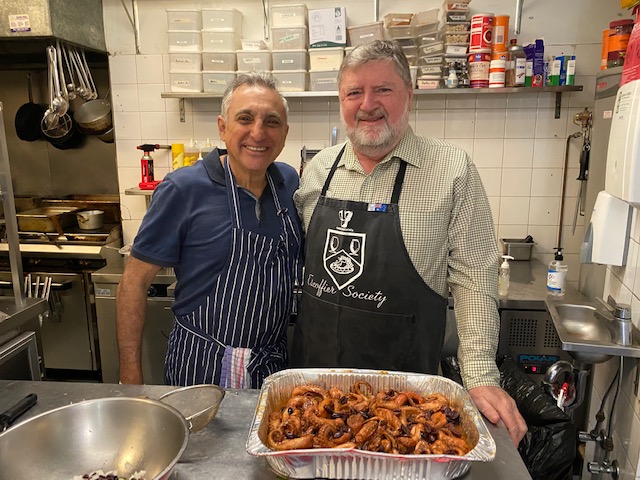 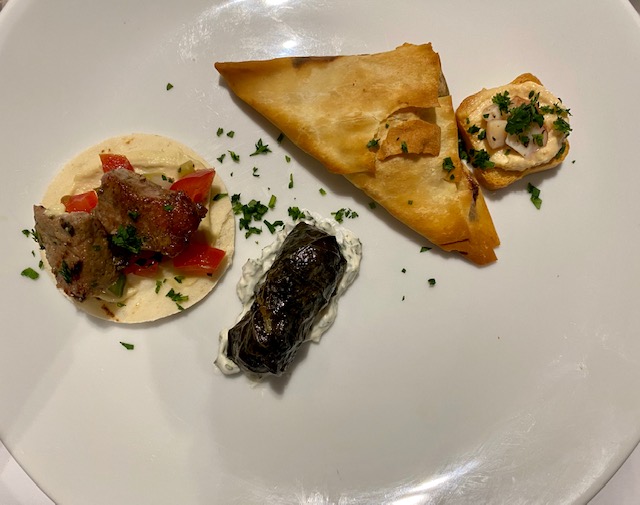 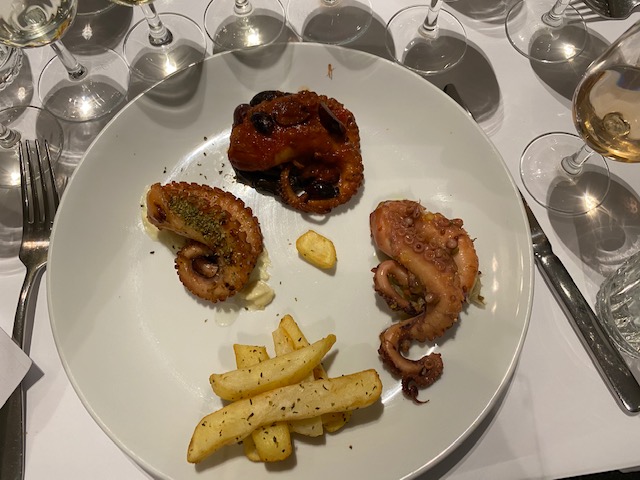 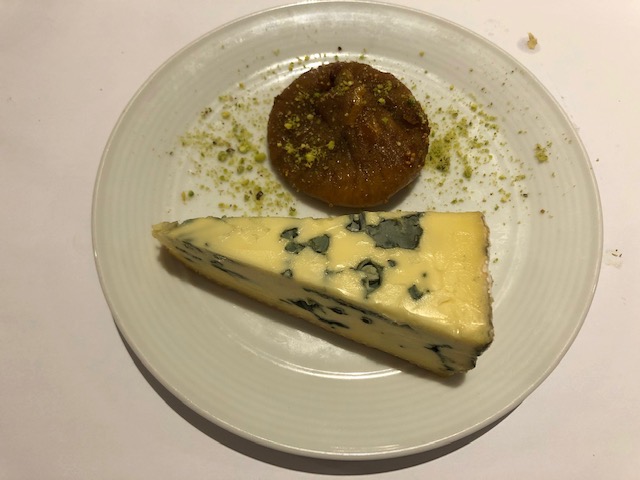 Our Foodmaster, Bill Alexiou-Hucker, was in the kitchen today assisted by Steve Sparkes and they provided bountiful Greek fare.

First up, after we had taken our seats, we were served a classic mezze plate of Greek canapés.

Taramasalata on toast with a little octopus tucked in the tarama.

Peter Manners praised the quality of canapés being presented at lunches and said today was no exception.

We were promised octopus cooked three ways, we had:

The writer cannot remember the last time we had fries served at a society lunch.

The dish attracted praise for taste, texture and presentation showing the versatility of octopus which capped off this triumphal trio from Bill.

Bill advised that some of the best souvlakia meat can be purchased from Souvlaki Boys in Marrickville.

The cheese had members guessing what animal/origin. Most thought it was European.

The cheese today was a Society favourite Berry’s Creek Gourmet Cheese Tarwin Blue. Barry Charlton specialises in blue cheese. His purpose-built factory in South Gippsland overlooks Wilson’s Promontory and it’s there that Barry uses the milk from a few local dairy farms to handcraft his wheels of blue.

Taking its name from the local river, this cheese is inoculated with a combination of three strains of starter cultures and one of blue mould spores. After maturation in a small room next to the dairy for a minimum of two months, the rich buttery texture becomes interspersed with dark blue veins and develops a distinct creamy blue finish.

Today we saw a great example of this blue cheese served at optimal temperature and condition. It was simply served with dried figs poached in orange and ouzo syrup. Comments suggested this was one if the best cheese accompaniments we have seen.

Our coffee was sourced by Nick from the Ona stable ‘El Salvador’ a blend of carbonic maceration lots and is characterised by notes of marmalade, peach, red apple and a hint of toffee.

John Goldsbrough closed the lunch saying it was most appropriate we had a Greek chef and meal today being the 20th anniversary of the Sydney Olympics and reminisced about his time carrying the Olympic flame in Palm Cove Queensland.

Today’s lunch saw three pairings of a Riesling, a Semillon and a Cabernet Sauvignon.

The first were vintages 2015 and 2017 of the Peglidis Riesling from Wines by KT. As expected, being from a great vintage, the older wine showed more defined fruit than the younger. Whereas the 2017 was looking a little flat, the 2015 was fresh and lively, full of lemon/lime notes with a real acid finish.

A pair of Andrew Thomas Braemore Semillons were the wines poured for the main course. Again the older wine was better on the day. The 2017 seemed to lack the zip and vigour we have come to expect from this wine. Surprisingly the colour on this and the accompanying 2011 wine was quite similar, perhaps suggesting the 2017 was ageing faster than expected. Of course, 2011 was a great Hunter vintage, and the Thomas wine did not disappoint. It still showed clear, bright citrus fruit notes with the recognisable toast of development just starting to show through.

A couple of vintages of the Wynns Black Label Cabernet Sauvignon were matched to the cheese. A Society favourite, both the 2012 and 2008 vintages showed a wonderful expression of the variety and the region. The 2012 was low yielding because of bad spring weather at flowering. This resulted in small berries with a lot of concentration and fruit flavour. The tannins were similarly concentrated and firm. The 2008 vintage saw a more traditional yield, although fruit ripened early after a hot summer. This wine had the Coonawarra mint and cassis with excellent fine-grained tannins. Preferred by most members on the day.