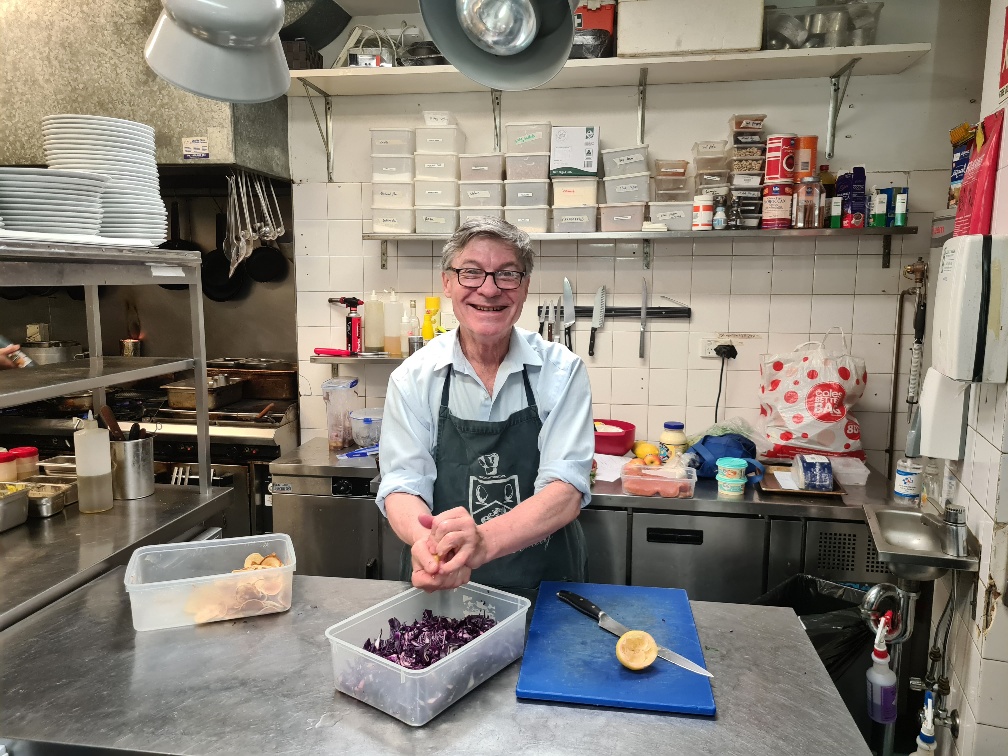 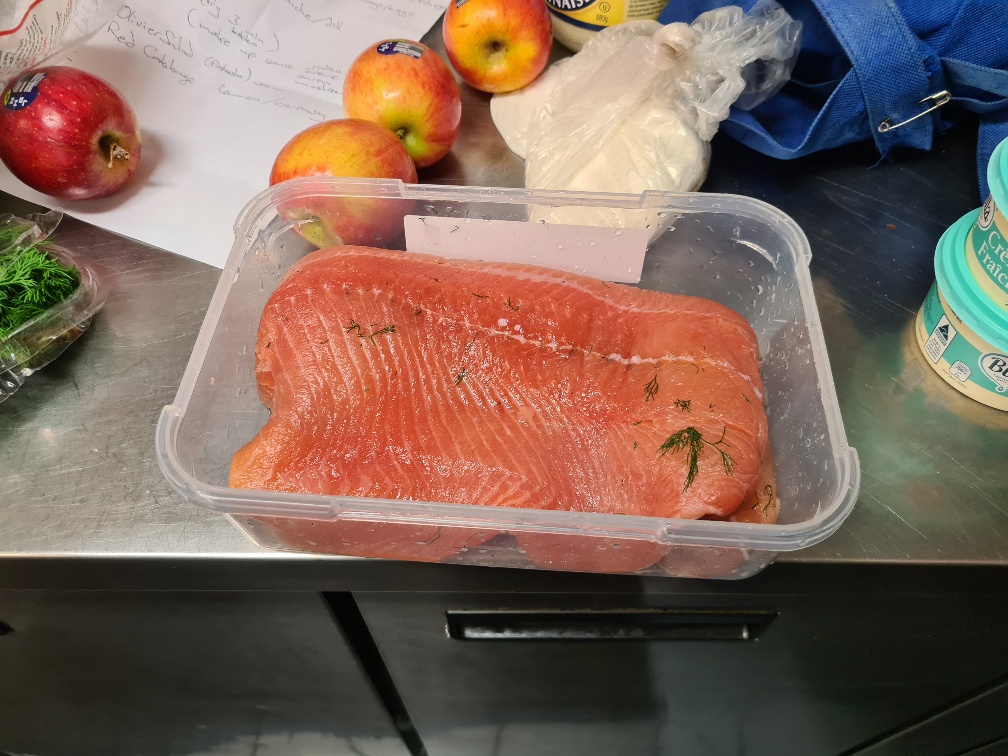 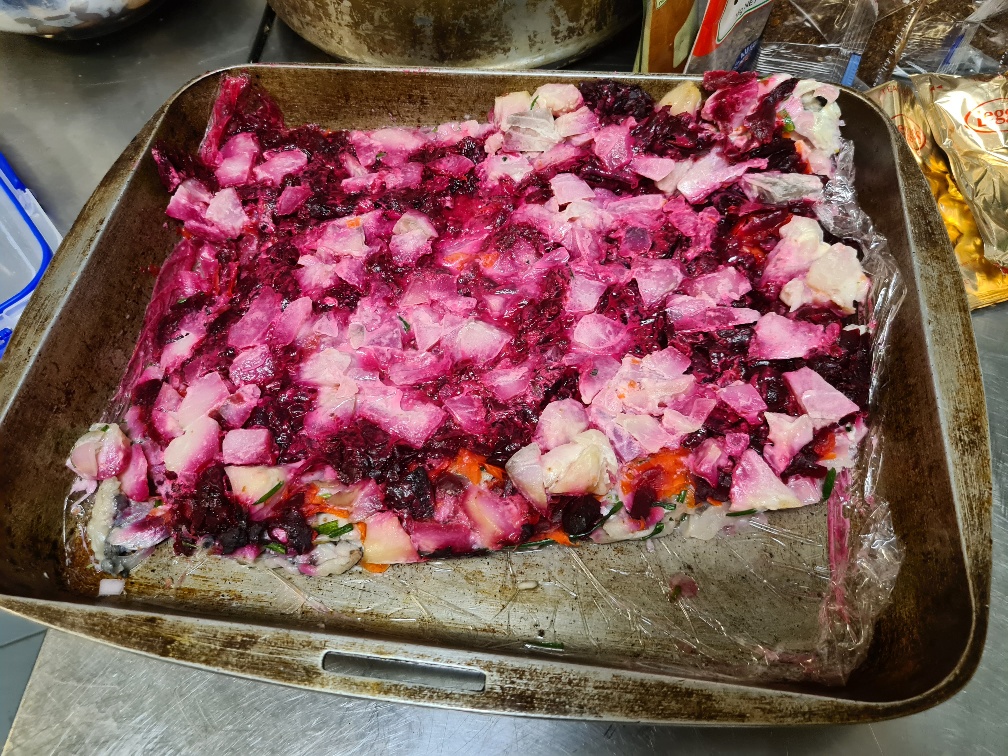 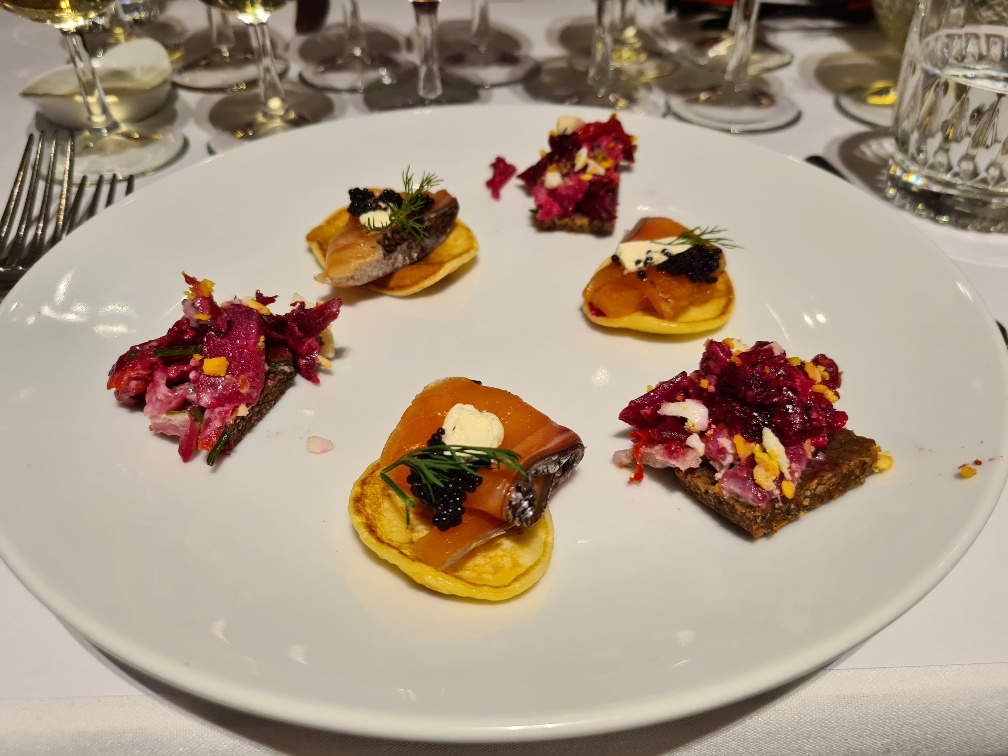 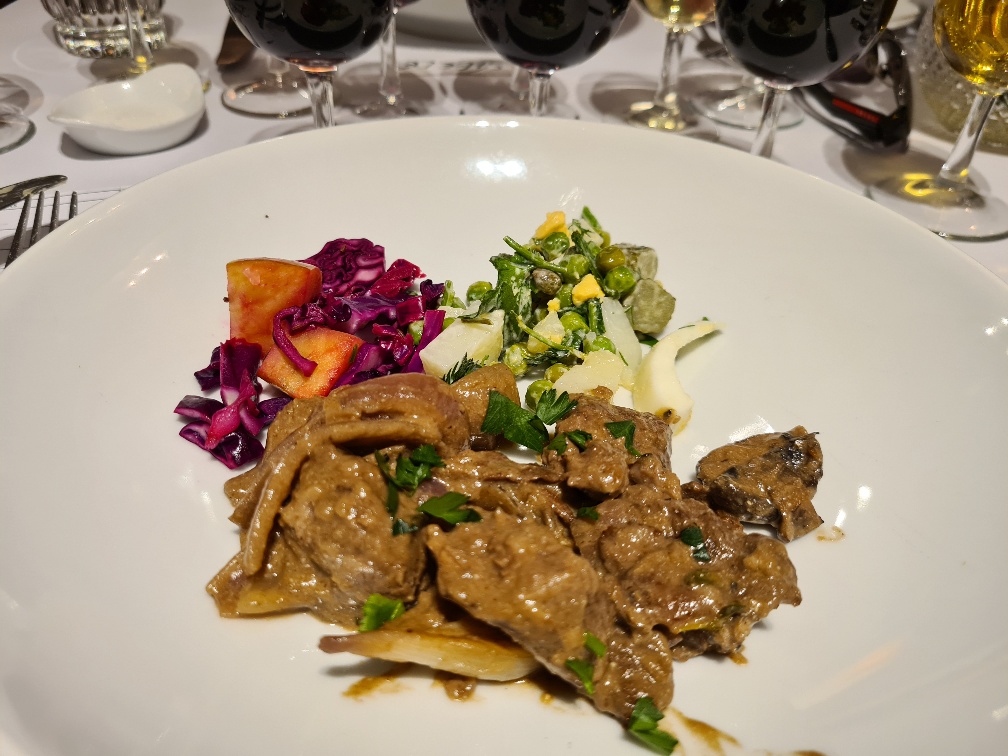 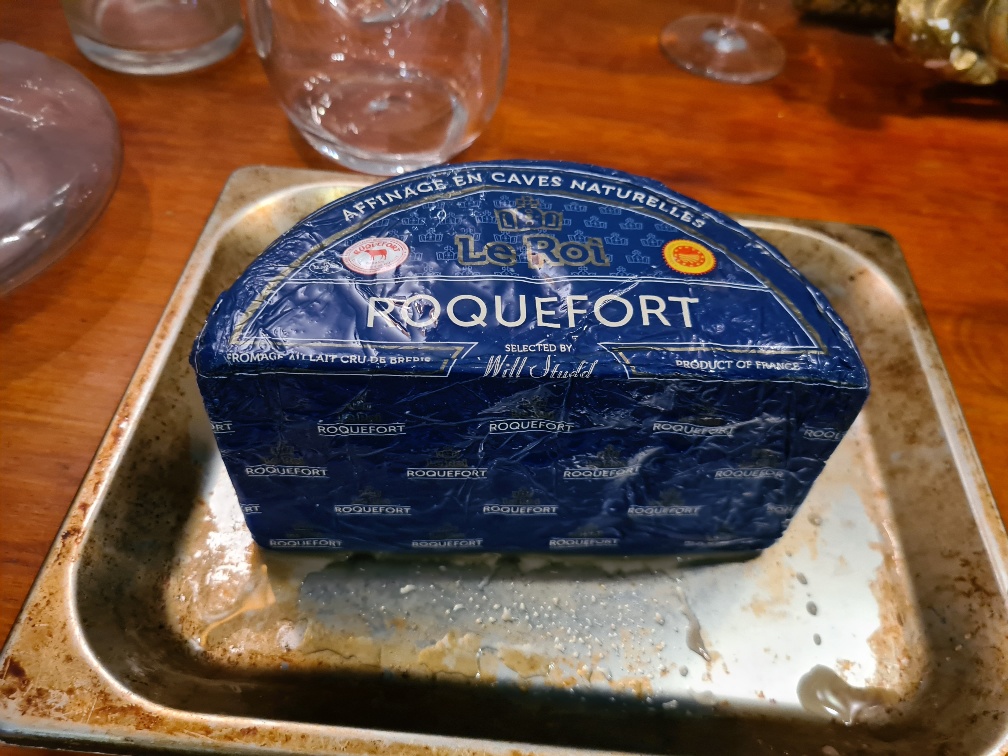 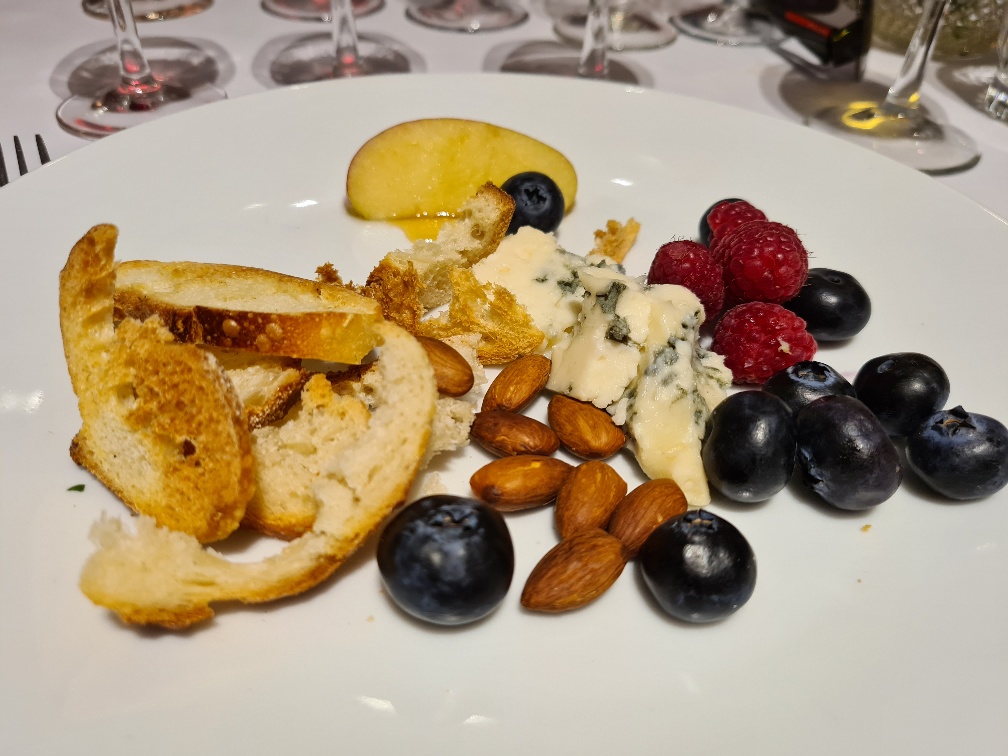 Greg Sproule a former Society Foodmaster, and a long-term member was in the kitchen today. He explained that this lunch was inspired by his first experience helping for a dinner party when he was 12 years old and it had a Russian theme.

There were two canapés served in the now-standard entrée format on a single plate at the table. These were firstly blinis with cured salmon, creme fraiche, fish roe and dill and then a classic Russian favourite "herring in a fur coat" being herring with potato, onion, mayonnaise, carrot, beetroot and egg.

To finish off the starters we had borscht comprising pork knuckle, beetroot, carrot, parsnips, potato, bay leaf and juniper.

Even the best of us on the tooth were struggling to finish the starters knowing that there was a main to finish. Both soup and the plated items received praise for their taste and complexity.

Carrying on the Russian theme Greg served us beef stroganoff a classic Russian dish but commonly served with many variations. I’m sure many of us can recall having beef stroganoff that came with overcooked hard lumps of beef and today’s example could not be more different. Greg had cooked the beef fillet for only three minutes, so it was medium rare and wonderfully tender to the fork. It was accompanied by cabbage, caraway, lemon and Salad Olivier (a traditional Russian potato salad), potato, dill, capers, peas, mayonnaise.

This was a wonderful interpretation of that Russian dish and cooked to perfection.

James Healey served us arguably the king of French cheese with Roquefort the oldest traditional French blue cheese from Le Roi. This particular example was cultivated in the old-fashioned way on woodfired rye bread. This bread is dried and ground to a fine powder and then sprinkled on the young cheese curds. After maturation, the soft ivory textured cheeses vein with blue mould has a wonderfully mild and aromatic, savoury flavour.

Greg accompanied the cheese with a diverse selection of apple, honey, almonds, raspberries and blueberry.

Our coffee was sourced by Nick from the Ona stable. Today’s was Guji from Ethiopia. The notes say it is an heirloom varietal with a raspberry note on the first sip that settles into a yellow peach note as the filter cools, accompanied by milk chocolate note and a hint of raw sugar on the finish. A good mid-strength coffee.

Greg finished off his description of the lunch by saying he went out for a “short” meal last night with a former President of the Society who shall not be named who apparently tried to nobble our chef’s performance in the kitchen today. He failed.

I recall Greg in his many escapades in the kitchen rarely had an assistant and today was no different. He provided us with lunch solo. Well done.

For today’s entrées, we had a pair of Chardonnays. It’s a very forgiving variety that can succeed in most regions, albeit with different levels of quality and expression.

The Bannockburn 1314 ad Chardonnay 2018 (so named in honour of the Battle of Bannockburn in 1314) was at the funky end of the style. Showing a lot of struck match, natural ferment characters, it was a rich, almost, fat wine with a very dry finish. Although also from western Victoria, the 2012 Seppelt Jaluka Chardonnay (from Henty) was at the finer end of the spectrum. A crisp, fresh style that eschews malolactic, it was still quite young and vigorous, although a little short on complexity.

The two Shiraz with the main course were a curious pair. The 2012 Laurent Combier Crozes Hermitage was quite flat in the glass. Although it did show some spice after time, it never fully came to life. As is often the case in the Rhône, the tannins were rather tough. The 2013 Hewitson The Mother Vine Barossa Shiraz 2013 is drawn from a vineyard planted using cuttings from a single vine planted in 1853 which was chosen because of its complexity and flavour and structure. Perhaps in the same mould as the Crozes, although certainly in the tradition of the Barossa, it was a big oaky wine with black fruits and chocolate and then blockbuster tannins.

A classic, traditional pairing with Roquefort is a Sauternes. Today’s wine was from the other side of the Garonne in the Entre Deux Mers. The commune of Sainte-Croix-du-Mont sits opposite Barsac and is renowned for producing quality sweet whites at value. The 2011 Château La Rame was an excellent example of the style. Rich and luscious, it had all the apricot and spice of the wines over the river.

Continuing a theme from last week we had another one of Wynns Coonawarra reds. The 2009 Cabernet Shiraz Merlot (affectionately known as the Red Stripe) was well poised with still time ahead of it. The vintage was late and allowed the development of fine flavours and tannins. The Cabernet notes were cassis and plum, the Shiraz was all pepper and spice, while the Merlot helped pull the palate together.