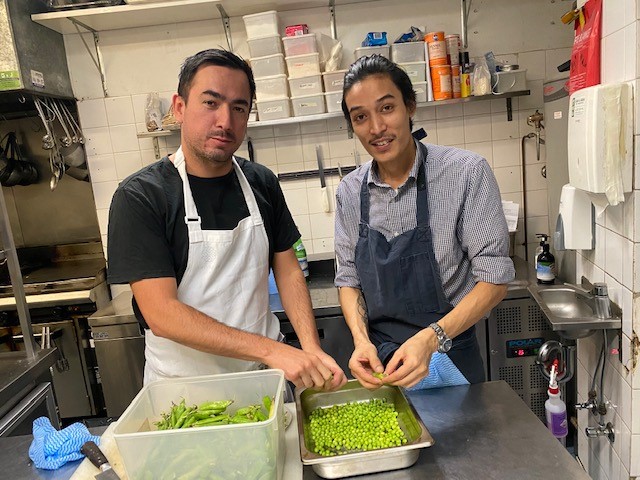 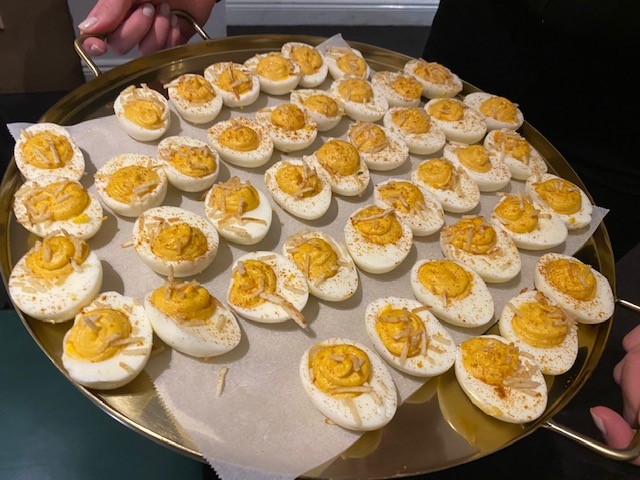 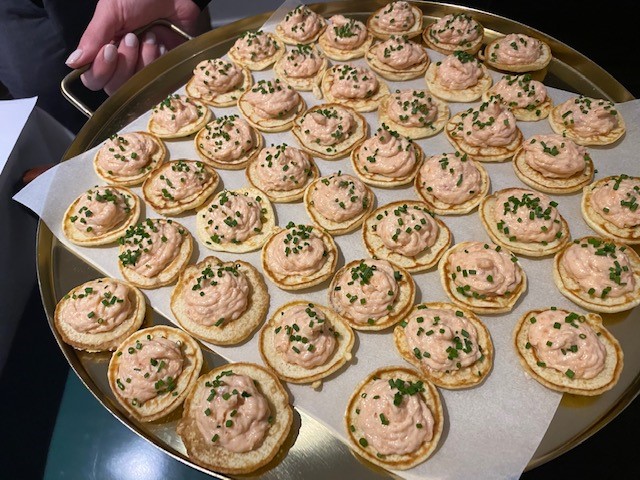 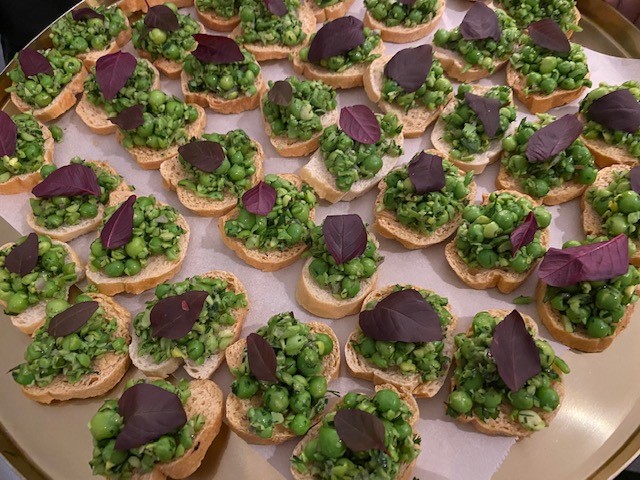 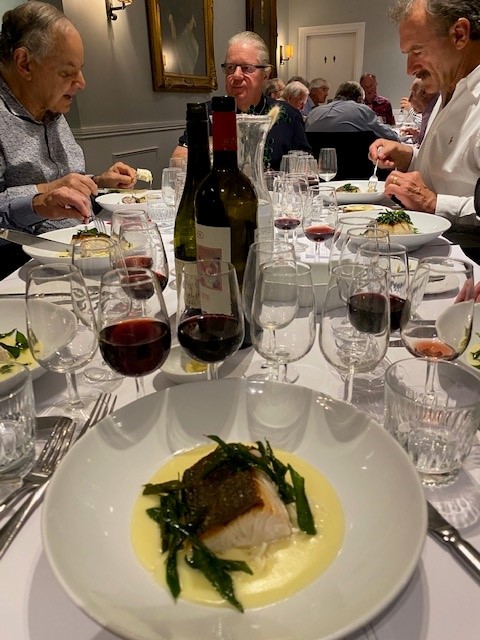 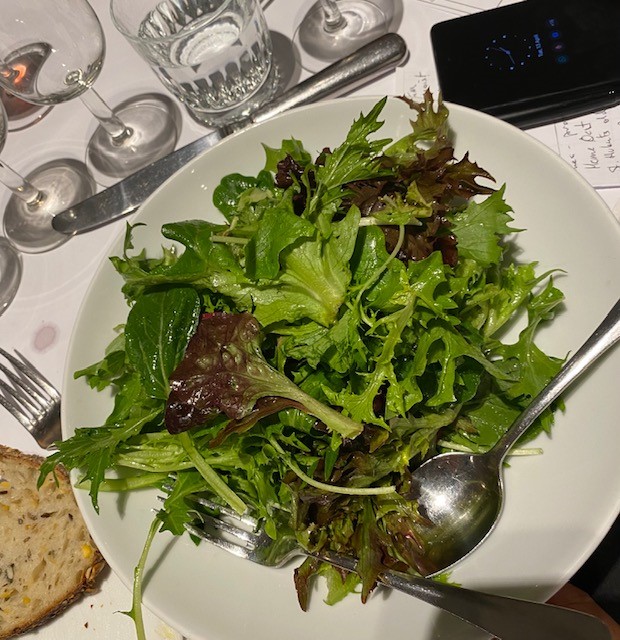 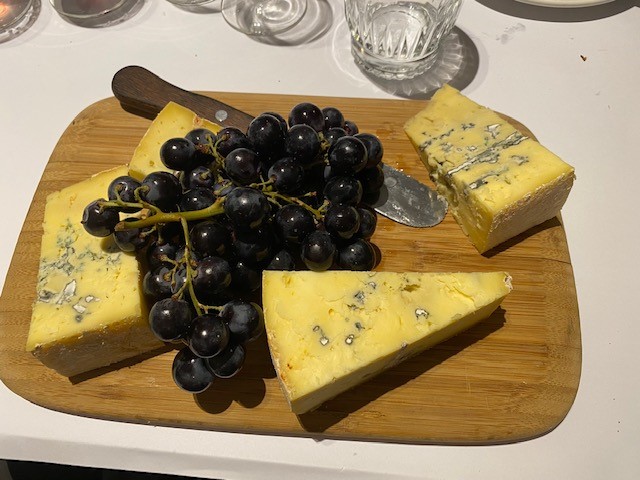 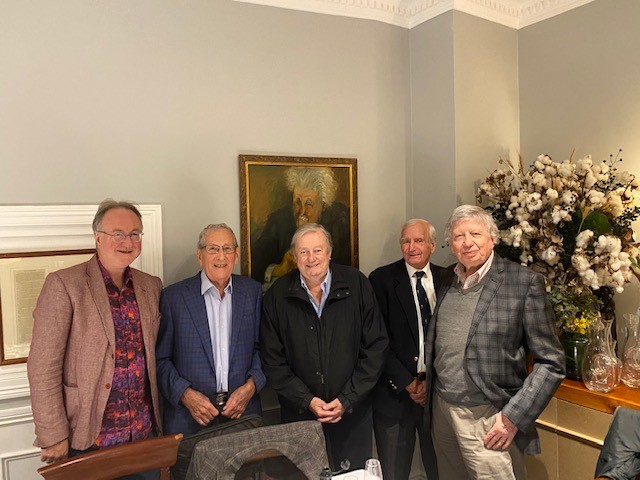 Today’s lunch was a special day. It was the annual general meeting, but most importantly it was a celebration of one of our august members, John Rourke, being made a Life Member of the Society, an honour that is rarely awarded.  To become a life member is not a matter of putting in the years, but in putting in the hard yards for the Society over the years.  John has been a member for almost 50 years and is certainly one of the forces that have shaped the Society over this time.

As befitting of the importance of the day, so was the chef; Rob Doll, who is the Royal Exchange’s head chef.

As the rules have now changed and members are again able to have their canapes standing up, conversing and socialising together, just like in the days before covid, there was a festive atmosphere in the room.   Rob started the canapes with an old favourite for some with his devilled eggs followed by a salmon mix on a blini and rounded off with a crunchy dry crouton, topped with peas. This finger food was very tasty.

A plentiful amount of accompanying wines were served, which were befitting of an annual general meeting; they were free! And we are trying to clear out the cellar. A brace of primarily Prosecco, KT Riesling and Holm Oak kept the assembled throng entertained until lunch was called.

Rob served a very tender, juicy fillet of kingfish, with an exceptionally crispy skin, partially immersed in a saffron-coloured sea of extremely creamy mash, with some green crisped lime flavoured leaves, to deliver just the right amount of zest to the fish dish.  This was on an interesting bed of finely grated vegetables, that had most guessing to be celeriac, however, it was eventually revealed as cabbage!  Which was a big surprise to many.

The fish was served with a 2012 St Huberts Pinot from the Yarra and an Italian 2016 Rosso Dei Notri.  Interestingly these wines were great accompaniments, to the fish, as they provided an excellent foil for the very creamy and rich potato mix.

A few at our table thought that the blue-veined cheese was European, however, the Cheese Master James again pulled one of his Australian party tricks, with the origin of this mild, creamy, blue cheese, turning out to be Milawa Blue from the Victorian high country. It was inspired by Gorgonzola Dolce. Amazing at how proficient our cheesemakers in Australia are becoming.

This was accompanied by some dark grapes and a leaf salad, with an interesting dressing that some members thought was too sweet, however, it was so tasty that it was completely consumed at our table.

The wine cheeses were a 2008 Wynns V&A (as Chilly educated us, which stands for Victoria and Albert), from Coonawarra and a big, but elegant 2005 Barossa Shiraz; a Teusner Albert.

The lunch was rounded off with the Society’s now standard coffee and after a few stories about John the lunch was closed.

A photoshoot of five of the attending Life Members; John Rourke, Josef Condrau, Terry Stapleton, Greg Chugg and Ted Davis; assembled, all under the amused eye of the painting of Andre.

There were two guests; one an ex-member, who is re-joining and the other is a Beef and Burgundy aficionado, who should join.

As an important note, the Chairman announced that there will be both a Chef of the Year dinner, as well as the President's Dinner, later this year, at a time that does not conflict with Vivid (we all know the chaos that ensued with road closures at a previous dinner).  There are also plans for an excursion to Tasmania next year.  These events will be publicised closer to the dates, to give everyone an opportunity to attend.