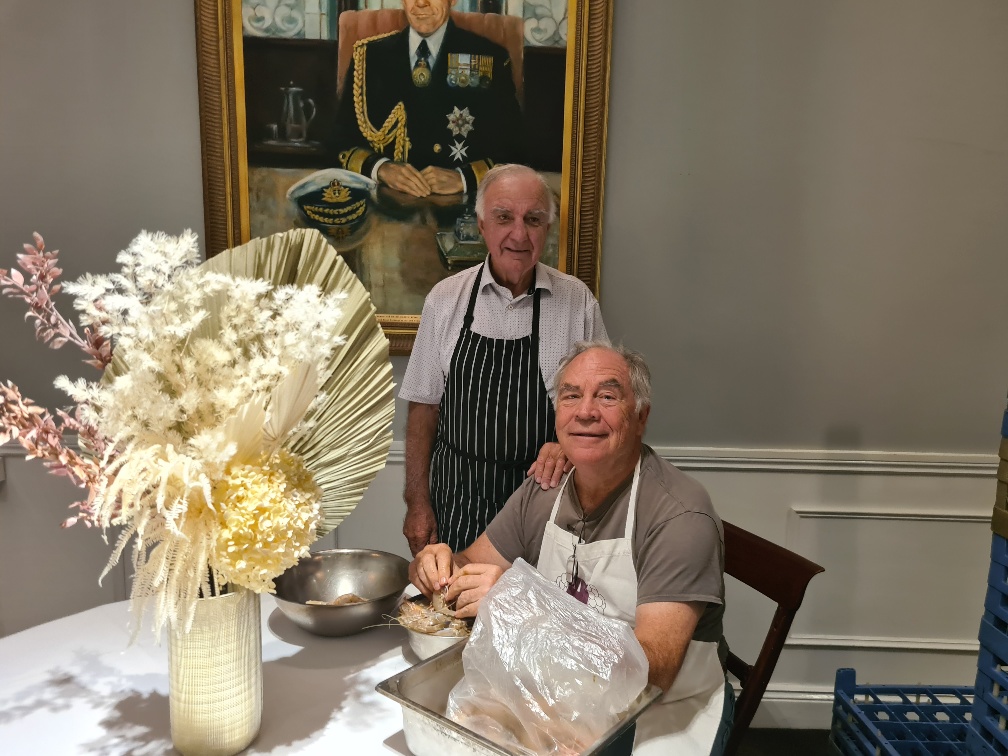 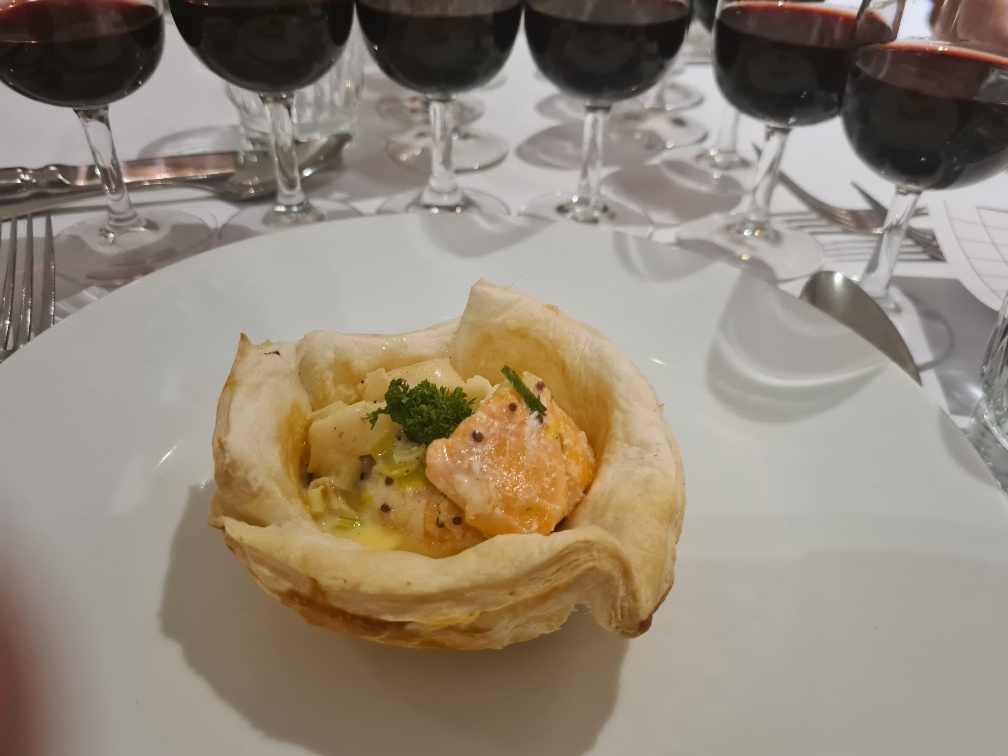 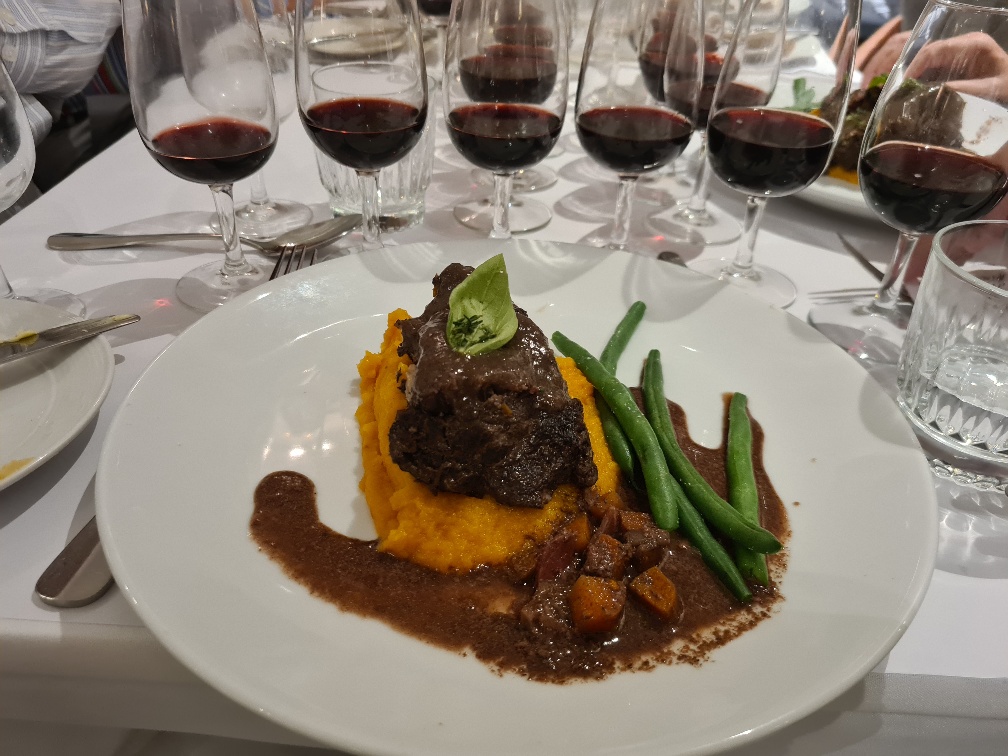 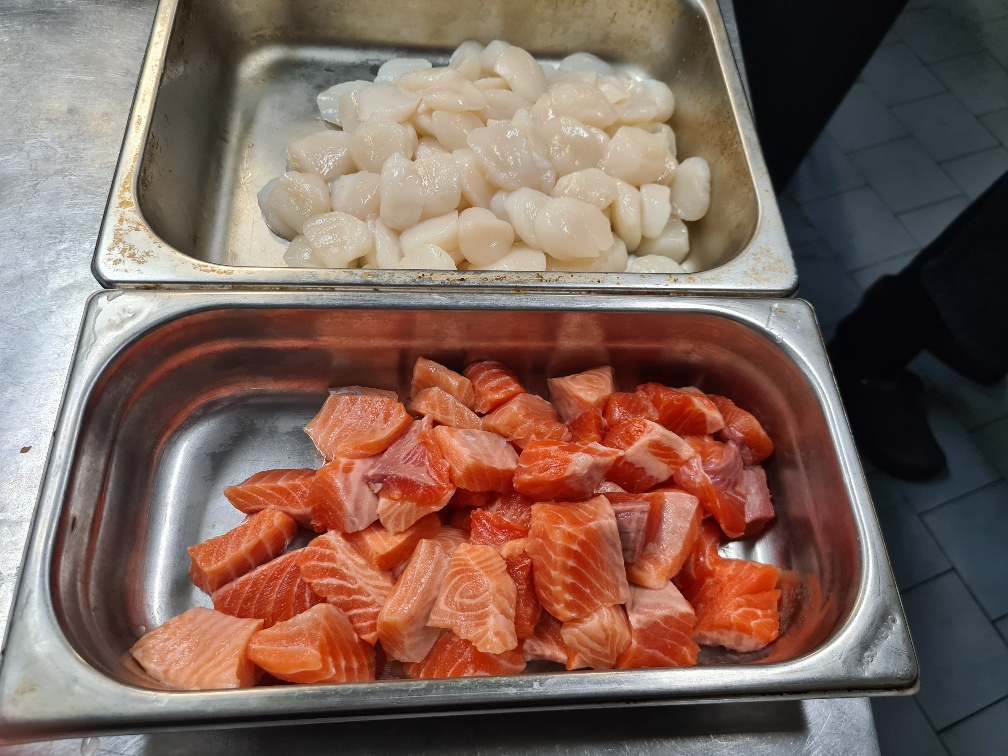 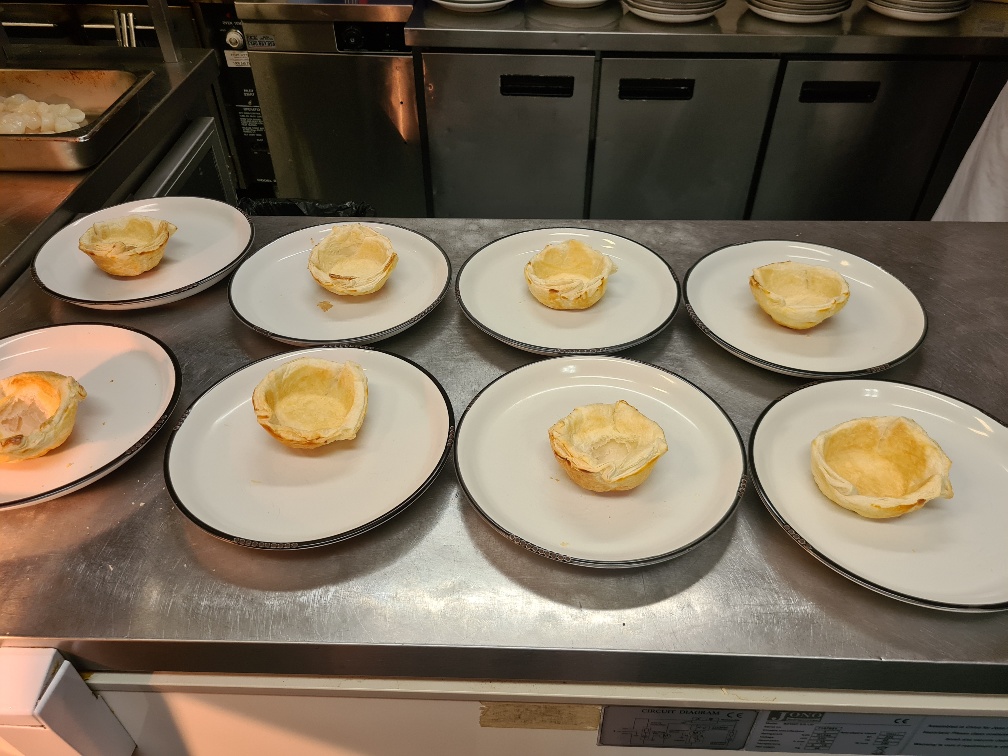 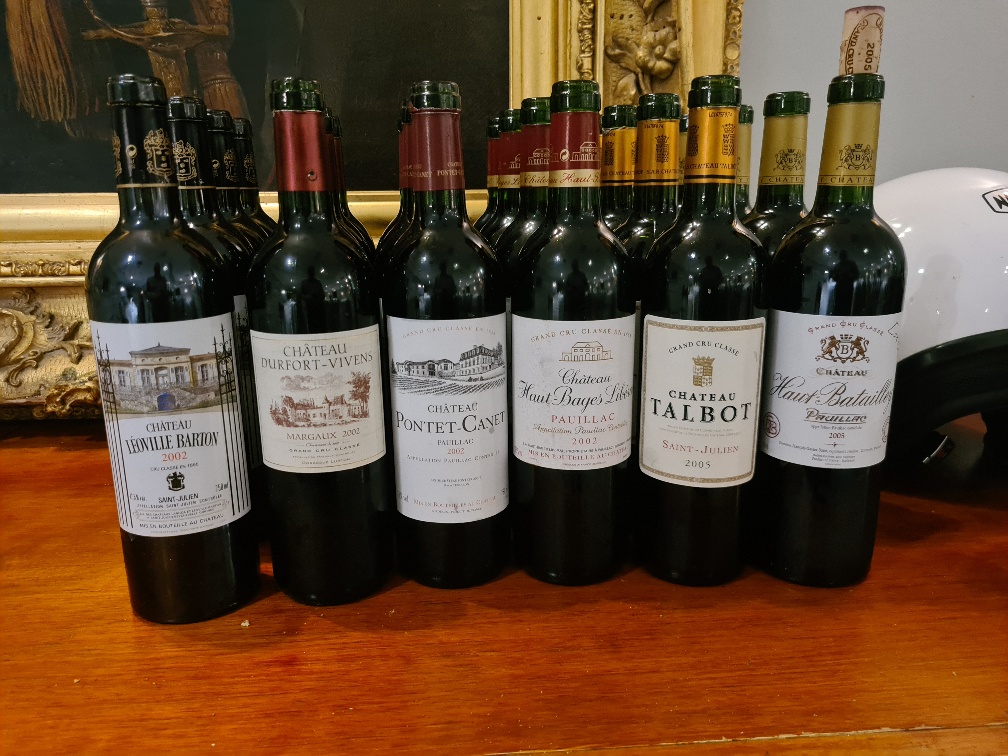 So in my neophyte position of lunch recording, this would have to be the most difficult task to date.

Gary was cooking and although Gary is a good friend, I have to report this without fear or favour, here is what transpired.

I have to say that this was probably the most entertaining lunch that I have been to in the past few years; there were numerous, humorous comments made around the room.

It was a bit like an Italian Spaghetti movie; “The Good, the Bad and the Ugly”. Co-indecently, it was also a full moon, but not just any full moon, it was a super moon. Now we all know what a full moon does to animals and lunatics and so a super moon amplifies this effect.

A super moon means that the moon is in its perigee; occurring during the Moon's closest approach to Earth. This one is known as the Pink Moon, and given the smoke from the burn-offs surrounding Sydney, it was pink.

The Lunch was the end of the month lunch; therefore, it was a Wine Tasting lunch. The focus was on the wine, rather than the food as we were entertained to a tasting old Bordeaux’s.

The place was jumping as it was a full house, with some members having to be turned away.  We are extremely privileged to have wines like these in our cellar as many are simply unobtainable now, given the enormous rise in popularity (and price) of all things French in a bottle. As Chilly noted, with these wines, even though some of them might be past their peak, and therefore best served sooner rather than holding on to them, as we are an educational society, it is so interesting to be able to sample these 15-20 fine wines.  With some of the latest vintages, some of the bracket of Bordeaux’s that we had would currently cost over $500 per bottle.

The comments on the food and wines were very entertaining, especially the acerbic comments raised by Chuggy, who was in fine form and certainly could not be stopped.  Some of the wines were potentially different to what some of the throng were expecting, however Roger summed it up very eloquently with “this is what Bordeaux tastes like!”

The wines were good, with a couple being great

The entrée wines were a 2014 Leo Buring Clare Valley Riesling, which was vibrant and fresh and great drinking, plus a 2018 Guigal Cotes du Rhone Blanc.  Most of the assembled group seemed to prefer the Leo.

The six meal wines were a 2005 Chateau Haut Batailley Pauillac 5th, which was a 70% cab and 30% Merlot blend and quite nice.  The 2005 Chateau Talbot St Julien 4th was very well balanced

These were followed by the mystery year of Chateau Haut Bages Liberal Pauillac 5th, which was eventually revealed as a 02.  It was dry and chalky and actually a bit disappointing.

The final three wines were all 2002’s, with a guessing game of either Margaux, Pauillac or St Julien.

The Pauillac, again with the 30% component of merlot was rich with chocolate tannins, almost like an Australian wine.  It was the favourite for most of the crowd.

The Margot with ¾ cabernet had a touch of greenness and possibly a bit underripe.  The fruit and structure are not there for this wine to keep.

These two wines were very good when initially opened however by the end of the lunch they had faded to grey and it was clear that they should be consumed very soon after opening.

The St Julien when initially compared to the Margaux and Pauillac, was not in the same class, however, by the end of the lunch this tannic, big tough grippy wine demonstrated that it had the structure to keep going with plenty of life left in this vintage and did not fade away like the other two wines in this bracket.

This led to another masterclass by Chilly.  We are very fortunate to have a member who can eloquently describe all of the wines and most of these comments are from his explanations.  A question was posed on whether or not to use a decanter, with some of these older wines.  Like everything it “depends”.  A general rule is if the wine is older then bruising it through decanting and rapid oxidization with exposure to the air can very easily result in a wine that rapidly degrades, as shown with the almost 20-year-old Pauillac and Margaux.

His advice on decanting is generally if you have a younger wine that needs to be infused with air, but you do not have enough time, then decanting can assist in speeding up the process, making the younger wine more palatable to drink at an earlier stage than normal.  Again it “depends”; some wines are made to drink early and some to lay down.

Having to turn away members, the lunch was so full that any guests of members were precluded from attending. (Please book early to avoid disappointment).

Well, there is no way around the description of the Beef Cheeks, just impossible to dress that puppy up in a compliment.  It was so disappointing for Gary Patterson and Peter Karr, his associate in crime, given the enormous effort that they had put into these cheeks.  I was informed that at a sample trial lunch a week before, they delivered a fantastic melt in the mouth beef cheek.  However, for many (as there was some variation on the outcome), it was difficult to have it melt in your mouth as it was impossible to cut it to get it into your mouth.

Some members had a brilliant experience with the cheeks, but most got the jawbone.  Gary said that it was a combination of the product and trying to cook too many at once. This is an educational society and this is a great lesson for anyone in the future who is looking to do beef cheeks to ensure that they do not place too many in the pot to cook at once.

The sauce with peppercorns which accompanied with it, was delicious, as well as the mash and the 2 green beans.

The entrée was a pastry basket filled with seafood, including prawns, fish and scallops, lathered in a very tasty sauce.  Mine was delicious, however, as with the cheeks, there was quite a bit of variation, ranging from what the members received in their basket, from very generous portions to a lack of some of the ingredients and very little sauce for others.  The basket itself was quite generous, with very light crispy pastry.  As we had a full house with a plus one, for portion control, given the time limits and the uncertainty of how many will attend, it can be very difficult to cook for so many at once with perfect portion control.

It may be helpful on lunches where we have a larger number of attendees to have more help in the kitchen, especially from members who have not had this experience very often.  I am sure that Bill will give you a tap on the back if necessary.

The cheese was a Victorian cheddar from Maffra dairy, simple yet delicious, as a good accompaniment to a very rich meal.

The coffee was again the house blend, which went well with the cheese.

The next couple of week’s lunches look brilliant and Chilly has promised some interesting tasty wine surprises.

Next week Gary Linnane is serving some hearty winter fare; who doesn’t like a wonderful lamb shoulder as the weather cools down?  The following week has one of our Marquee chefs; Paul Kuipers of the Courtney's Brasserie in Parramatta fame.  The numerous reviews for his food from both patrons and the Good Food Guide, ensure a culinary delight.

Both of these events are booking out very quickly.

If you don’t want to miss out, then please book early.  It also helps the chef plan for the meal and also ensures that you will have a place at the table to enjoy your self with your friends and foes.