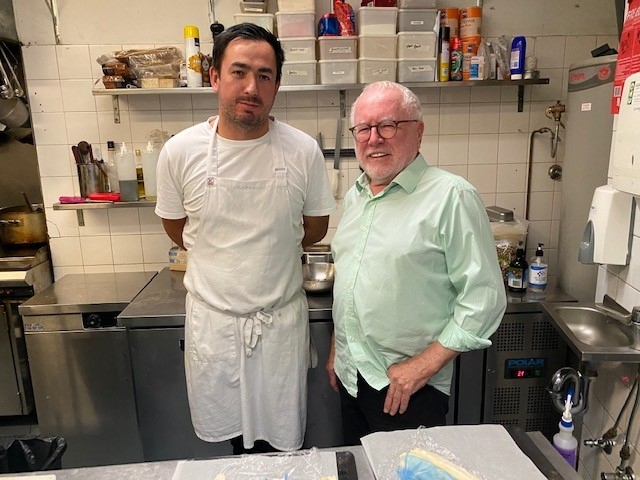 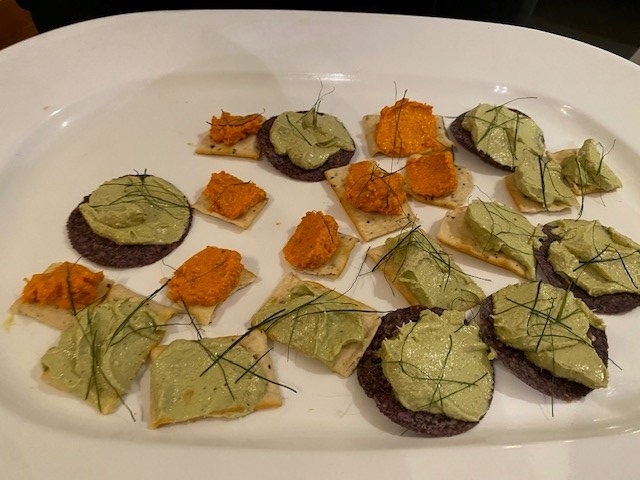 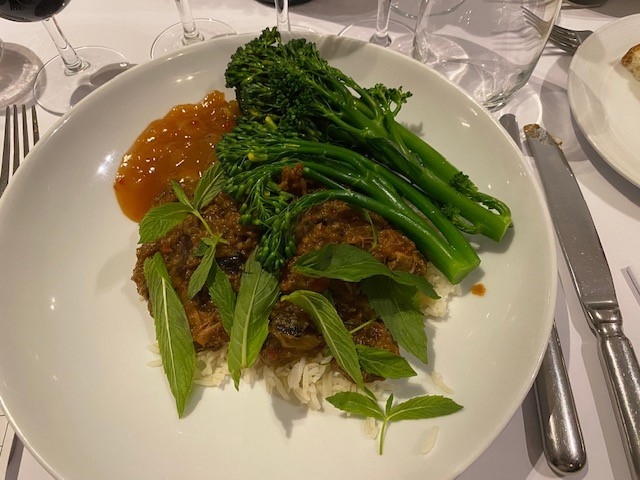 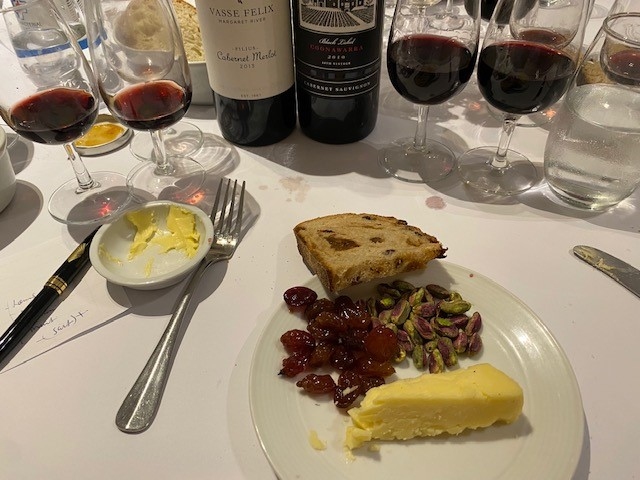 If some of these comments sound like a broken record it is possibly because on this day in 1878 Thomas Edison's Phonograph was shown for the first time at Grand Opera House.  Also 89 years ago, one of the men who kept the troops lubricated during the time of prohibition, good old Al Capone, made his way to the big house in Atlanta, not for the murder and mayhem he created, but for tax evasion. Also, today, the 4th richest person in the world, Bill Gates has announced he is getting a divorce. A good tip is to buy your partner flowers often, put on some music you both like and have a good wine; (not Al’s bathtub gin).  These simple steps help to keep the divorce lawyers away.

What is the primary comment you can make about today’s meal cooked by Gary Linnane? It delivered!

It was exactly what it was supposed to be; not nouvelle cuisine, not fine dining, but the right meal for a cool, rainy autumn afternoon; comfort food.  It was simple but extremely well put together. A meal that touched the sides of your stomach and left you quite satisfied.

The three canapes with the assistance of James Tinslay were an interesting mix; red on a biscuit, green on a biscuit and a Palmiers.

James again served savoury Palmiers, similar to what was served a couple of weeks ago. This is not the sweet breakfast ones that many of you may have tried in the past.  They consisted of pastry, Philly cheese, anchovy, dried tomato slathered in butter.

The red was certainly a blend of capsicum, however, the interesting surprise with this finger food, was the addition of both raw cashew nuts and cooked brown rice.

The green was almost universally picked by the members as an avocado/guacamole dob on the rye cracker; however, it did have an interesting taste that veered away from normal guacamole.

This was because it wasn’t one.  It actually turned out to be a green tahini dish, with sesame seeds and coriander.  This was a big surprise to everyone.  Very tricky Gary and James!

One comment was our canapes today were “health food on a biscuit”!

We’ve come a long way since canapes were considered as a bit of Bega cheese on a Jatz cracker.  Nick pointed out that our canapé meister; Mr Peter Manners, is the one responsible for this great change in the Society’s cuisine.

Chilly had picked out very special whites; a 22-year-old Seppelt Drumborg Vineyard Riesling to accompany Gary and James’ canapes, however, this did not go quite according to plan as all four of them were dead on arrival.  Two were corked and two were oxidized. Quite a shame as when these were produced in the last century, they were extremely successful wines.  The same wine, but a 2016 rather than the 1999 was also served.  It would have been most interesting to compare the two vintages.

A couple of other whites including a Tyrrells were also served with the canapes.

For the main, Gary served up to us a slow-cooked lamb shoulder stew, with fresh mint leaves on the plate as well as a generous serving of perfectly cooked broccolini.

The origins of this slow-cooked French peasant food, which has now become very high end, were the peasants in France, who would toil all day in the fields.  However, before they went to work in the fields, they would put on dinner, early in the morning, in a large pot, slowly simmering in a far corner of the fireplace with a lid on.  During the day, the cook would come back to ensure the fire was still alight and a bit of stirring of the pot and tossing in a few veggies and herbs.

At the end of a hard days’ work, dinner would be ready for them, complete with loaves of bread to soak up the gravy.  Well, this is exactly what we had today, sans the toiling in the fields.

Gary simmered the lamb shoulder in a pot for several hours, accompanied by a complementary portion of eggplant, that was very useful to soak up the fat that was rendered from the lamb.

The big, aged, Aussie cabernets were the right accompaniment to the meal. Chilly commented that this was the best-matched meal that he has had in the Society.  The food and wines were a perfect blend.

One very good indication of the success of the meal was the lack of gravy on the plates at the end of the meal.  Fittingly, most of the members had cleaned their plates with the plain white bread that was a great foil and sop for the delicious gravy.

The two lunch wines were a 2006 Rosemount Mountain Blue; this time the real deal and not a potential copy, as was served a couple of weeks ago in the guise of 16-year-old 2005 Rosemount Mudgee Shiraz Cabernet, which had been passed off many years ago to the purchasers of this wine as one of the Society’s favourites; a Mountain Blue.

The second wine was a 1993 Lindemans Limestone Ridge Shiraz Cabernet.  This 28-year-old wine still had great fruit when opened, very soft and good on the palate, however, as with most of these older wines, there was some cork variation and this wine was best consumed shortly after opening.  If you left some of this wine in your glass towards the end of the meal, it then resembled vinegar rather than an elegant wine.

This wine was produced when Ray Kidd was the CEO of Lindemans and waging his war with the dreaded enemy; Penfolds. I don’t know who really won that fight, but I am sure that it spurred both wineries on to making great wines to defeat the opposition.  We the consumers are the victors! A bit different to today when many of the wines have been made to simply quell the thirst of our Chinese comrades. Quite often quantity over quality. Given the politics that Australia now finds itself in, it will be interesting to see how the wine industry changes and copes.

There was also an extra wine on a few tables, as the throng were crowded onto four, rather than five tables. Ours was a 2009 Wynns Coonawarra grey label shiraz, which went very well with the main meal.

The two cheese wines were a 2013 Vasse Felix The Filius Cab Merlot, which tasted of cassis, a touch green, and a little bit unripe fruit, with a very grippy feel, similar to the Bordeaux last week.

The other wine was a Wynns 2010 Cab Sav Black label.  A wine that always seems to have the same consistency over most vintages.  This was with hints of chocolate, and mint as befitting a Coonawarra wine, with jammy notes, red currants and tannins that were dry and not fine like the Vasse from Margaret River.

It turned out that they had been soaked in a 20-year-old Museum Muscat from Yalumba.  The coffee was the usual society blend.

We had the attendance of a couple of guests, one of whom was Marcus l; one of our past Presidents. It was great to see him back at the Society and we all hope to see more of his presence at lunch in the future.  Anyone who knows Marcus is certainly aware of his wine knowledge and wine database, which are both very impressive.

Next week we have Paul Kuipers in the kitchen with Goldy as Exec chef.  This should be a great lunch, as Paul in the past has been highly acclaimed by the Good Food guide when he was running his signature Parramatta restaurant. We are very fortunate to have Paul cook for us again.

The following week will have Denis Redfern, cooking up another delicious storm in the kitchen.  He has revealed his menu to me and I will certainly be there to enjoy the food and company.

One of the members stood up today during the comments and voiced what we now all feel, especially those that have been missing in action over the fear of covid during the past year; that it now seems like we have gone back to normal.

Good company, great food today, with very well-matched wines on a cold and rainy afternoon, where else would you possibly like to escape to, for a couple of hours?

See you next week for an upcoming meal that promises to be superb.