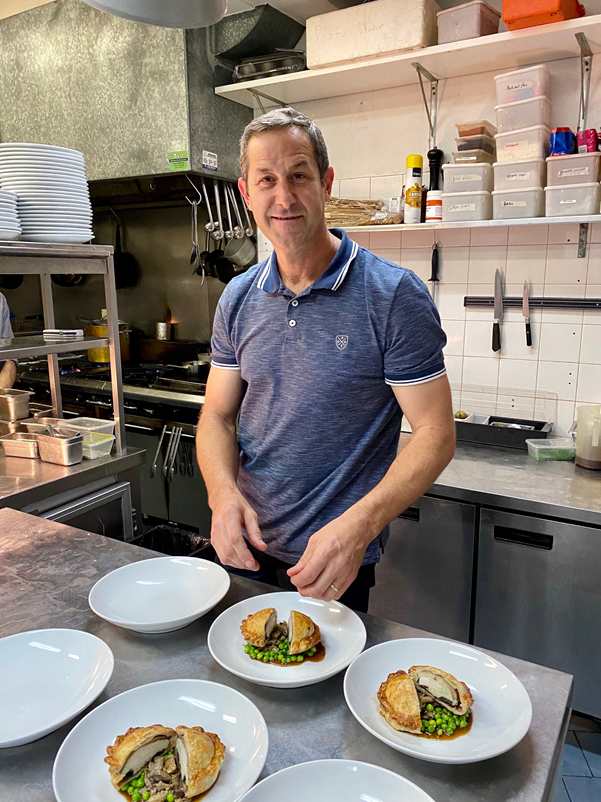 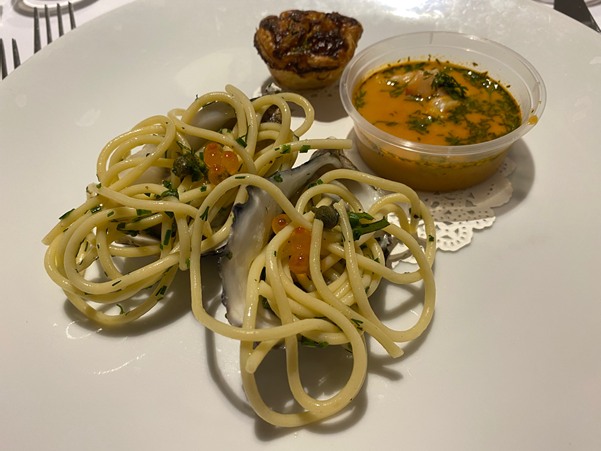 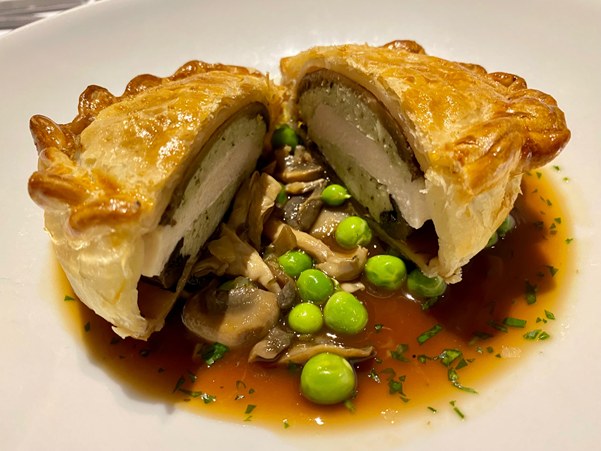 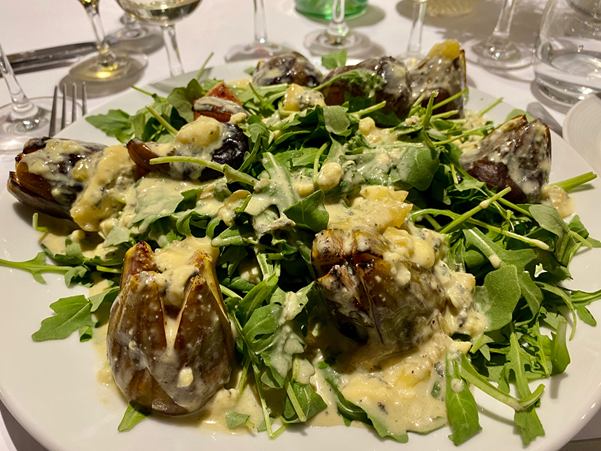 Once a year for the past nine years or so, member John Goldsbrough (Goldy) has arranged for his good friend Paul Kuipers to cook for the Society. It is always an event to both look forward to and remember.

We had a gratifying number of guests at today’s meal, including Goldy’s son Gavin (hopefully a potential future member) as well as several recent and prospective members.

Up until 2019, Paul owned and ran the much-loved Parramatta dining institution Courtney’s Brasserie. With the construction of new developments in Parramatta doing to Paul what the light rail did to so many restaurants in Surry Hills, Paul was forced to close Courtney’s. He then faced the pandemic. What happened next showed Paul’s versatility and resilience. In the past year, he has become an executive chef for a number of remote-location sites, increased his mentoring and teaching load, expanded his catering business to include events run by Government Ministers (including the Premier) and, most recently, is working on setting up a distillery in the country using equipment from a recently-closed sake brewery. We look forward to trying his whisky in a few years’ time.

At today’s lunch, Paul showed us the depth of thought, care, and skill that made his restaurant and is making his catering so successful.

Recent CoVid restrictions meant that we once again had to sit for canapés. Paul provided us with a trio of seafood canapés that set the scene for the quality meal that we were to have today.

The first of these was a dish that made many relieved that we were sitting down with a knife and fork rather than standing with a glass in hand (Eating canapé chicken wings while standing? Your challenge has been met and exceeded). The dish comprised a shucked Pacific oyster with spaghetti, dill, capers, and salmon roe. Some oyster-purist members queried the need for accompaniments to the oyster but Paul later explained that the dish was spaghetti with an oyster sauce rather than the other way around, which made a lot more sense as the well-cooked al dente spaghetti was the hero of the dish.

The second appetiser was an extremely tasty prawn bisque. Lastly, Paul took the puff pastry offcuts from the main course (see below), ran them back through his pastry laminating machine and then used these for the small pastry tartlet cases that he filled with a mix of miso, eggs, chive, and eggplant. This was a seafood-based umami bomb that created a good bridge into the main course.

For the main course, Paul presented a flawlessly executed technical masterpiece. His Chicken Pithivier was encased in top-class puff pastry made by Paul. The pie comprised a sublimely moist piece of chicken breast surrounded by a chicken and tarragon forcemeat encased in two slices of confit field mushroom. The forty-eight perfectly formed pies were accompanied by a reduced chicken stock sauce that Paul enhanced with mirepoix of vegetables plus sage and thyme with chopped tarragon added at service. He also presented freshly shelled peas that were cooked à point, just past raw. To finish the sauce, he also upped the umami content by adding both oyster and shimeji mushrooms. The dish was universally acclaimed by diners, with Greg Chugg commenting that it was the best meal he had been served at the Society for many years.

At normal lunches, we are used to pieces of cheese with a separate salad or other accompaniments. Today we were presented with a cheese course that Paul often serves as an entrée. Having tried it a few weeks ago, Goldy wanted it as our cheese course and it proved a perfect finish to today’s meal.

Warm figs were quartered but not cut through. Paul inserted a piece of blue cheese (in this case roaring forties blue from Tasmania) into the centre of the cuts. Heated so that the cheese was melted, the warmed figs were served on a bed of rocket. A luscious sauce that was served over the figs was made with more of the cheese, thickened cream, honey and an essence of prosciutto. Served at the table with some more of the sauce, the dish was a sweet and mainly savoury taste sensation that wrapped up a delightful meal.

One of the wines today accompanying the cheese course was one of Australia’s great fortified wines: a delicious Morris Old Premium Rare Muscat. This was generously provided by Goldy in a nod to his 30 years of Society membership.

Paul is a chef at the top of his game and, through Goldy, a great friend of the Society. We look forward to him cooking again for us in the future.

With Paul’s plate of a trio of canapés, we presented a pair of Hunter Semillon. The first was a younger wine (2109) from a younger producer (Matt Burton of Gundog Wines). It was good to see a young Hunter white with its fresh lemon fruit and zippy acidity. It was quite textural with a good mouthfeel. It was a wine that split the room regarding style and perhaps quality. The cellar master found it on point with an extra layer of complexity. Of note, Gundog tends to specialise in Shiraz and Semillon. It also makes wine from Hilltops and Canberra. The older wine (2014) from an older producer (Brokenwood). It had evolved into the recognisable buttered toast aromas and flavours. Perhaps a little lacking in vibrancy.

The two Shiraz (both from 2009) with the main course were from the cool and warm ends of the viticultural spectrum. The Nick O’Leary Canberra Shiraz was showing its age with some of the original peppery, spice notes showing more earthy, plum characters. The Lowe Wines Icon Block 5 Shiraz was naturally in a bolder style with firm tannins and good weight. While still showing fruit aromas and flavours, they are developing and the oak is starting to sit on the wine.

For the cheese course, Goldy was keen to provide his Morris Muscat, so the Society was able to match this with a sweet white from Bordeaux. Sauternes is a classic match with blue cheese and today we had one of its neighbours from Sainte-Croix-du-Mont. Located across the Garonne from the village of Barsac, this wine was from one of its more renowned chateaux, Chateau La Rame. The 2011 vintage was difficult for red in Bordeaux, but the cool, damp, humid autumn was ideal for the growth of botrytis. This wine (served in half bottles) showed lots of the traditional apricot aromas with a rich, luscious palate. A good foil for the figs with blue cheese.

However, the ''pièce de résistance" for the day was the Morris Old Premium Rare Liqueur Muscat. It’s been often said before that this style of wine from Rutherglen is one of the world’s most unique wines. This was certainly no exception. With an average age of over 20 years, it paired the concentrated raisined complexity gained after time in barrel with the freshness of younger material. The art of blending is very much part of these wines and today we saw it at its best. Separately judged at 100 points by both James Suckling and James Halliday. Thanks Goldy.