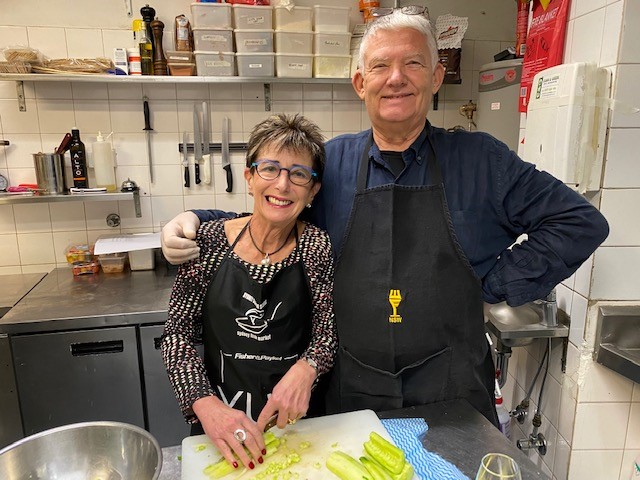 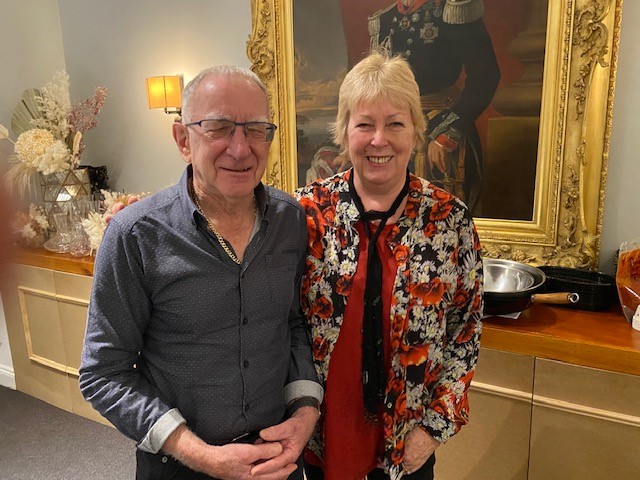 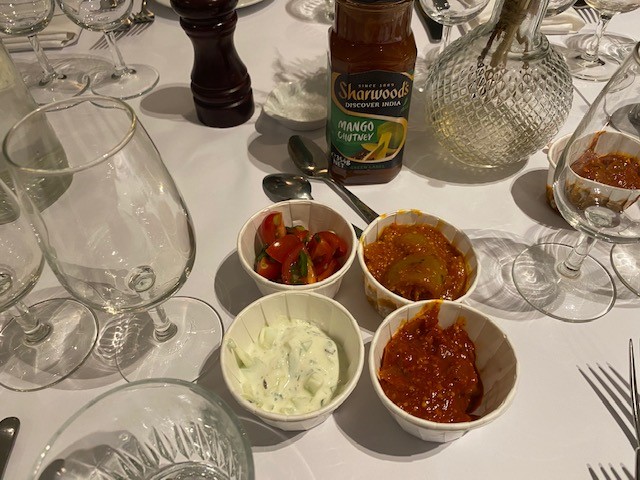 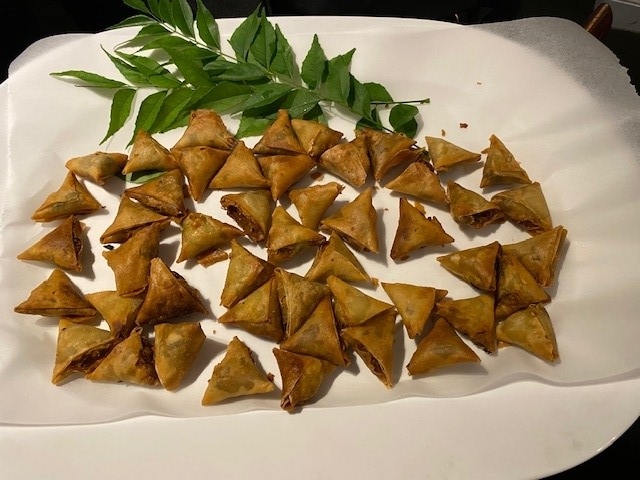 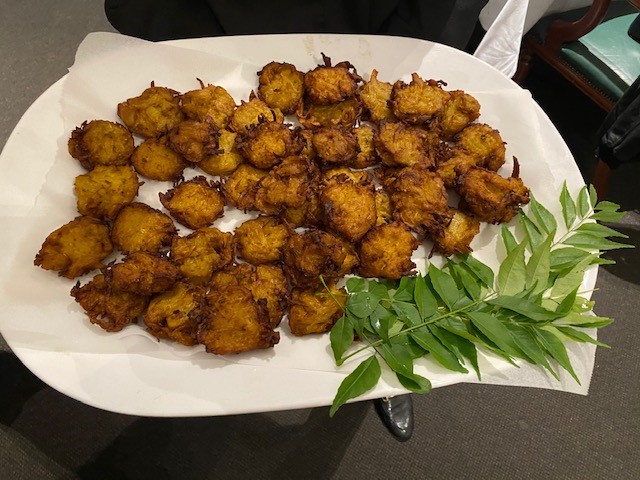 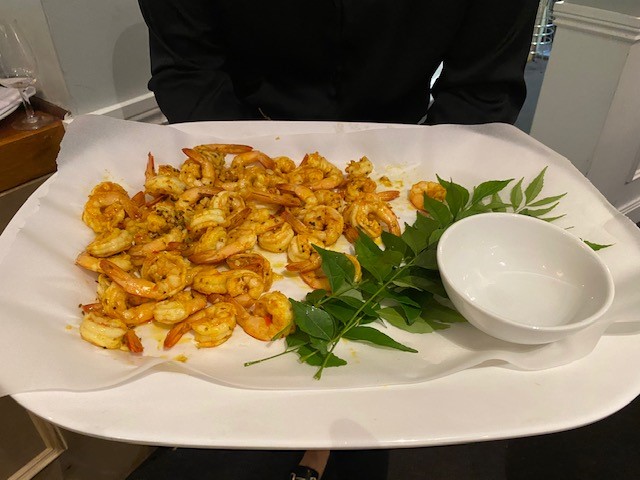 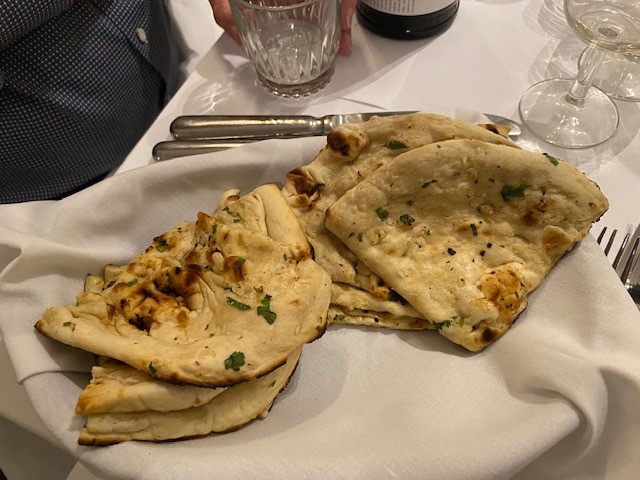 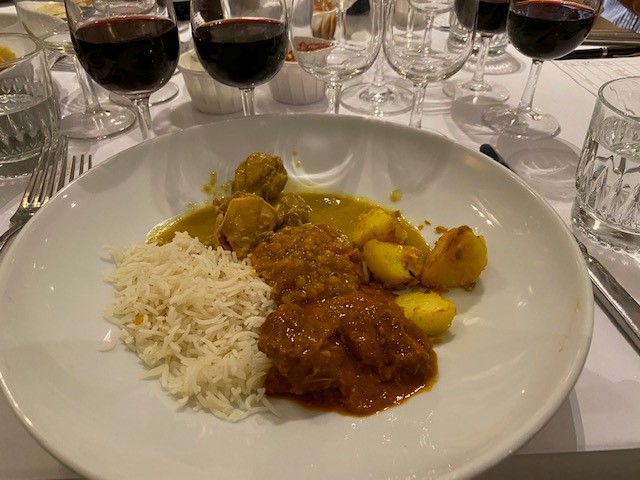 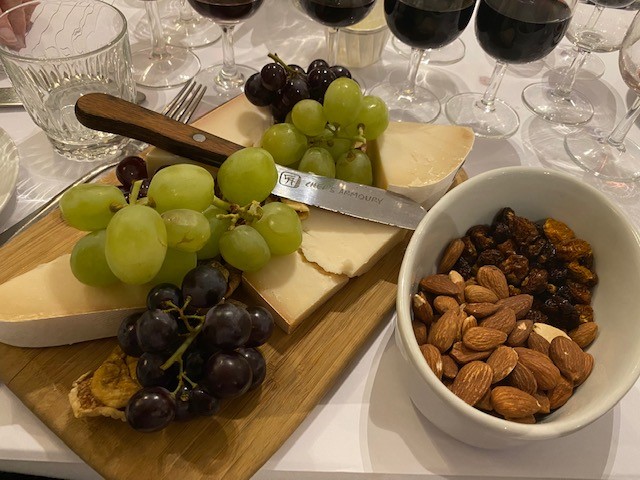 Today Denis/Dennis squared with Trish and Jennifer created an Indian delight to a full house.

It was again back to normalcy, where we could all stand around and converse with each other throughout the canapes phase.  We had just started getting back to normal, when over the past couple of weeks, the imposition of minor crackdowns on standing and masks, due to the unknown covid carrier, cast an unwelcome shadow of the reality of the virus.

A number of the members have already been vaccinated and hopefully over the next few months, if we all follow suit, this should stand all of us in good stead, with only high blood pressure, occasional gout and abused livers to contend with.

Denis Redfern was the originator and creator of this wonderful melange of Indian food, more than ably accompanied by his wife Trish, Dennis Cooper and his wife Jennifer Darin (fantastic to see her here in the Society again).  To top it all off, once they had completed their part of the meal, it was off somewhere else to lunch for Dennis and Jennifer, to leave Denis Redfern to garner all of the accolades.

If there was one criticism that was repeated around the room about the canapes, it was that there was only one of each for every diner. This was firmly policed by the wait staff, presumably on strict orders from the kitchen. They were so tasty that I know if more were available, many more would have been crammed into our mouths, as each one was a separate delight.

The samosas, with Indian Spices from far off Chatswood, had a bit of heat which was aptly put out by the Tasmanian Tamar Valley’s Leo Buring’s Leopold Riesling, which was floral, dry and aromatic, with lovely purity and a high acid level, that worked wonders as a fire extinguisher on the palate after the tasty bite. Great accompaniment and matching of flavours and textures.

The onion bhajis, a mixture of onion, coriander and Besan flour, were deep-fried had the appropriate crunch and a bit of sweetness, which went well with the second aperitif wine, the German Kabinett Mosel Riesling.  This wine with its residual sugar content was an excellent companion to Indian cuisine. Besan flour is actually made from ground chickpeas, rather than wheat.

The canapes were rounded off with some small tasty Masala Prawns, tempered in a sauce of garlic, coriander and mustard seeds, with just enough of the Mosel to finish the first act off.

The bell was rung and it was all time for everyone to go to their corners, and be seated.

Denis had artfully catered for all levels of tolerance of heat for the members' palates by placing small tubs of Raita, tomato sambal, mango chutney and a hot chutney on the table for each person to determine how far along the temperature chart they wished to pursue.  The pickles and relish were all consumed by the end of the lunch and no one complained about the meal being too hot or spicy as they were the masters of their own level of heat.

The main course consisted of Raffles chicken, Rogan Josh and Sookhe Aloo, on a bed of long-grain rice.

It was agreed around the table and the room, of the three concoctions on the plate, the standout winner was the Rogan Josh. There was even enough left over for a second helping in a bowl for each table, which returned empty by the time it made its way around the diners.  Some extra Nans and pappadums were extremely helpful in ensuring that all of the liquid on the plates was mopped up.

The wines that accompanied the meal were very big Aussie Barossa Shirazes.  They were a great match, with their full-bodied dense flavour and high alcohol content that seem to polarise members; who either love or detest them.

The first lunch Shiraz was a 2009 Pirathon from Kalleske which was elegant, restrained, pretty with spice, not jammy with fine tannins and great with the curry. It was also described as ripe, jammy heavy and not fat with the tannins not matured well. … different tastes!

The second wine was a 2008 Torbreck Struie, which also went very well with the food.

The cheese was a L'Amuse Brabander, which was a semi-hard Goats milk from the Netherlands. The porcelain-white paste of this cheese is a stark contrast to the deep amber colour synonymous with the usual classic Dutch gouda, as it is a goat’s milk gouda – a lesser-known variety, which has been made in the Netherlands since the early 1800s.   Brabander comes from the Brabant region in the south.

It was complemented with some almonds and raisins, plus red and white grapes.  The two cheese wines, which came early enough to also enjoy with the food, were also great with the curry.

There was a 2009 Kaesler Old Vine, which came from vines older than 35 years, which luxuriated for a long time in an oak bath, then was served up as a “monster”, with chocolate and aggressive tannins!

The 2008 Hardys Bin HRB D646 (such an elegant name), was a blend of McLaren Vale and Clare, which many thought was the wine of the day.  Described as an attractively balanced wine with good tannins and went very well with the goat’s cheese.

The coffee was what is now the Society’s main blend, with just enough gravel to make it a good palate cleanser.  So much better than some of the dishwater that has been served up on some occasions.

Commenting on the meal;

As one member remarked, quoting the late Max Lake; “Strong food demands a strong wine”.  However, another member then remarked that “palates change”.  It is fantastic that here in Australia we have so much choice in both our wines and food.

Josef, who has been known in the past for some of his critical observations of the dishes served up by members, remarked that he has never had a meal that has “come together, better than this one”. I can only speculate that this is indeed high praise for the lunch.

Chilly informed us that the Struie was named by the winemaker, who used to be a lumberjack in Scotland and the Struie was the forest where he would fell his victims. A very interesting change of profession.  It certainly is an educational society. I am not sure if there is a winemaker in Australia and Europe that Chilly doesn’t know.  We are extremely fortunate to have such a great resource for our own wine master.

Chilly is also looking to donate some of his time to some wine masterclasses during the rest of the year.  This will be for both aspiring new members as well as the existing cohort and will be held in the evening.  These events will have an extremely small number of places available.  More of this fantastic initiative will be discussed over the next few weeks, as times are organised.  If you are interested, it would be advisable to let Chilly know as there will probably be waitlists.

Speaking to Denis about his meal and creations, it was interesting that India was not one of the many places in the world where he has lived, however in some of the far-flung corners of the globe that he called home, came many of these recipes.

The chicken curry was actually a 1950’s recipe from the iconic Raffles Hotel in Singapore, via his parents and grandmother and as such is more of a Malaysian style curry than an Indian one.

Next week will be a wine tasting week, with some great wines being lined up by Chilly.

Mark Bradford will be in the kitchen, recreating his version of the battle of Dien Bien Phu; a mix of French and Vietnamese. And you don’t need to go all of the way to Cabramatta, which it was remarked that if you drive a Merc there, you will not be hassled as it is the vehicle of choice by the local import/export entrepreneurs.

Vietnamese food is such a great balance between all of the tastes and it is with anticipation that we look forward to Mark’s version, with some interesting iconic wines thrown in.

It is advisable to book early as the wine tasting lunches are always booked out!