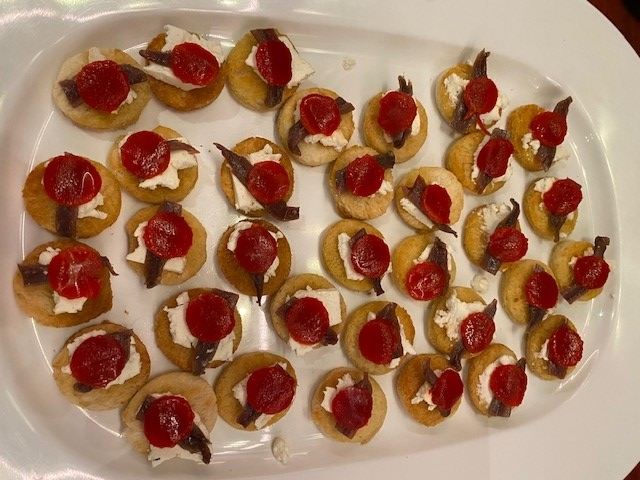 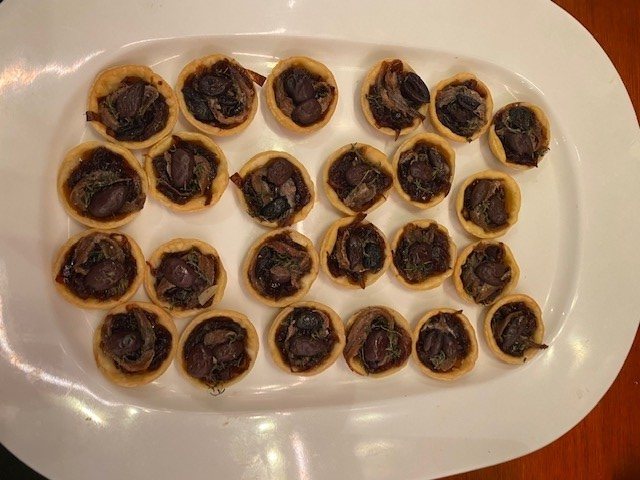 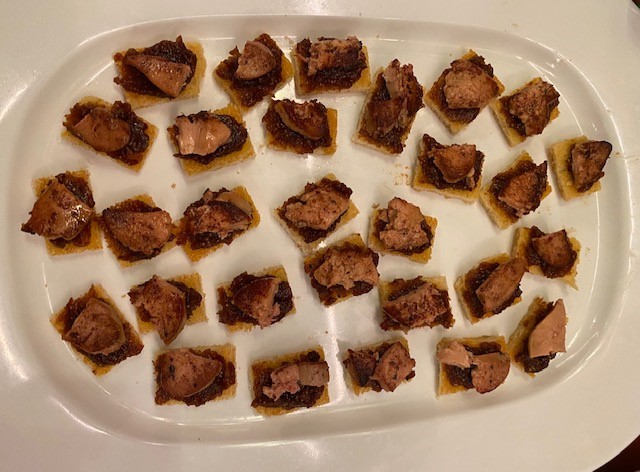 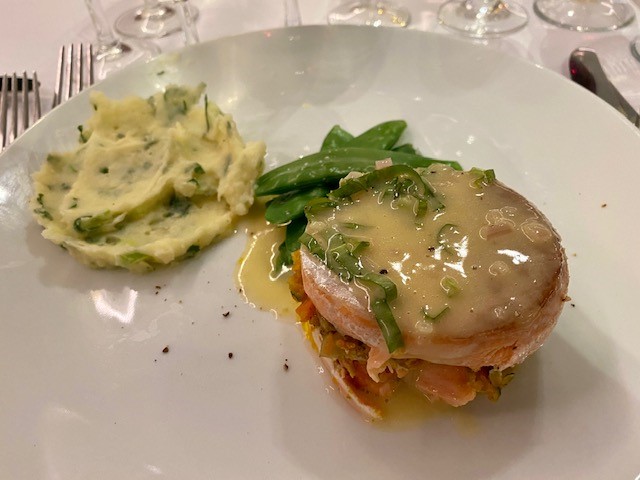 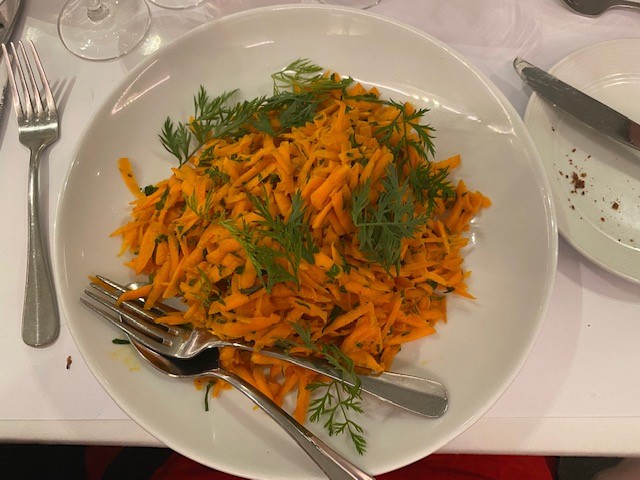 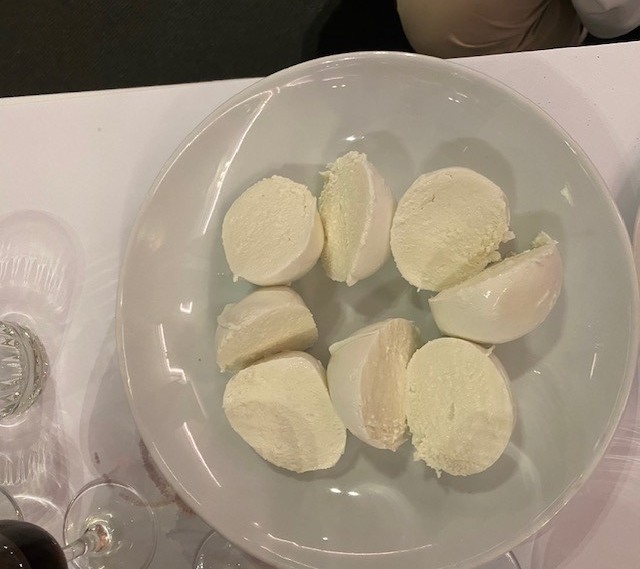 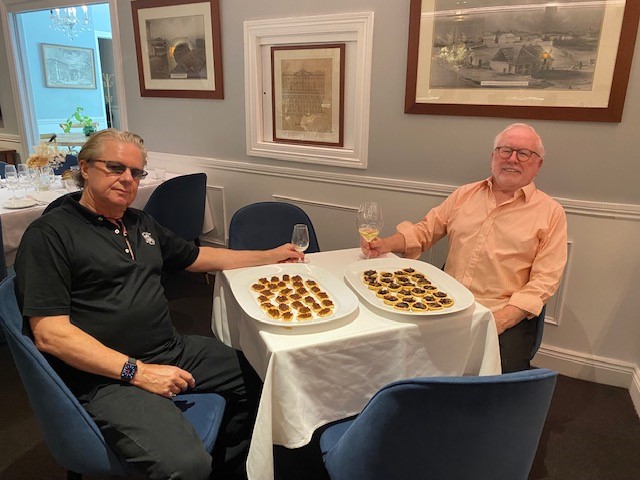 Caution; reader alert, this review does not contain any alcohol!  The wine review will be provided in a separate article.

Well, the footy season is almost upon us and James Hill a known Rugby Union tragic, in our first scrimmage of the year for the Wine and Food, kicked a goal. He has now set a blistering pace for those following in his wake. Crimony! I think that this meal was a classic rugby match with the Aussies mixing it up against the French and was worthy of a storming of the Bastille.

James, Paul Thorne and Gary Linanne were hard at work before the lunch, beavering away creating the entrees at a small table in the corner.  They looked so engrossed and enthused that at least one member offered to join them at their “table” for lunch, only to be informed it was a working table, and at lunch, they would be the only one at the table.

James kicked it off with Feta cheese with anchovy and pimento aka capsicum...on toasts.

The other two entrees were by;

Paul; who produced his seared foie gras with fig and red current soaked in cognac jam.

Gary created individual anchovy tarts. These were a bite-size version of the classic Nicoise pissaladiere - caramelised sweet onions in a pastry shell, topped with a whole anchovy fillet, split olive and fresh thyme and baked.

For the Main Course

James created a Tournedos de saumon et Beurre Blanc a l'oseille. (for those of us who are not Francophiles), this translates to tournedos of salmon with sorrel beurre blanc. Hold on, we are still back to French again!  No matter how you pronounce it, the dish was delicious.  Nothing better than salmon and mash!

The salmon was cut into discs. One piece of salmon was placed on the bottom of a pie tin then a dûxelle of carrot zucchini, champignons, eschalots layered on top then another disc of salmon was added.

It was served with snow peas and a potato mash that had shallots (spring onions) and parsley mixed with it. A few clever individuals playing Inspector Clueso were correct with the mystery ingredient of sorrel.

Now everyone has different tastes, it is one of the advantages of the society, however, if there was one bit of controversy of the meal, it was possibly the selection of the cheese and this other than the wines was the outlier.  Given that it was both an Aussie cheese and from Buffalo, (which to my limited knowledge not many French keep in the backyard).

It was a BUFFALO MOZZARELLA Stretched Curd with 8 Balls in a 1kg Tub, not a pool table, from Shaw River Buffalo, in Yambuk, VIC, Australia.  This of course is a very light cheese.  Generally speaking at most meals, there is never any cheese leftover, however, on a few tables, there were some balls still rolling around after everything was said and done.

Interestingly, the Australian buffalo milk and cheese-making industry was pioneered in the 1990s by Roger and Sue Haldane when, after extensive overseas research, they hand-selected and imported the finest Riverine buffalo from Italy and Bulgaria. Their specially chartered plane endured an unexpected short stopover in Tashkent, Uzbekistan en route to the Haldane family farm in Western Victoria, where milk production began in the coming months. As milk production increased, Roger and Sue started making buffalo mozzarella and yoghurt using the protein-rich milk of their grass-fed buffalo, utilizing skills learned during the training they undertook whilst in Italy.

Today, the descendants of those same Riverine buffalo still graze along the banks of the Shaw River, their fresh milk being transformed into yoghurt and cheese. The Haldane’s cheese has become synonymous with the very best of Australia’s artisan cheese production. The milk from their small herd of buffalo creating the ideal texture and flavour for crafting pasta filata style cheese. The curd once formed, is cut by hand and gently stirred with a device known as a ‘thorn bush’ due to its unique shape. When the time is just right, it is placed in baths of warm water and stretched the traditional way; by hand. This allows the cheesemakers to choose the perfect time to transform the hot curd into shiny, porcelain white balls, that are then cooled before being packed by hand into tubs of brine. The spun layers of curd give a texture that is moist and milky, with a delicate flavour distinctly different from cheeses made from cow’s milk.

The cheese salad was carrot and parsley with a dressing of red wine vinegar, Dijon mustard, EVOO and sesame oil, salt and pepper. It was garnished with carrot tops.

Next week, yet another master lines up his fare in the kitchen, with Steve Liebeskind about to dazzle us with the form that won him the Chef of the Year last year.  It has already been booked out, but don’t let that stop you from trying to book.. you never know.