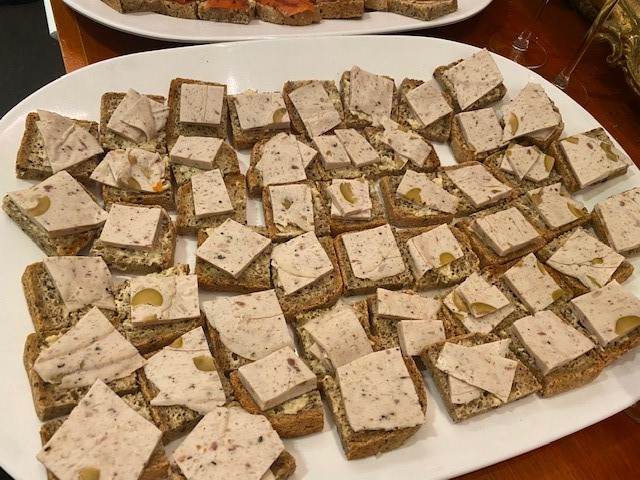 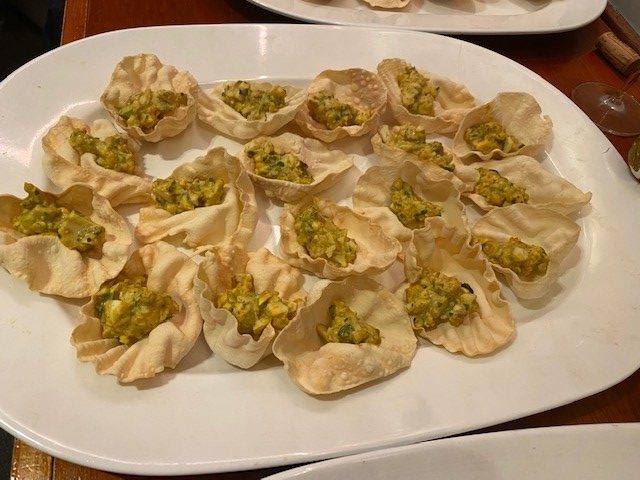 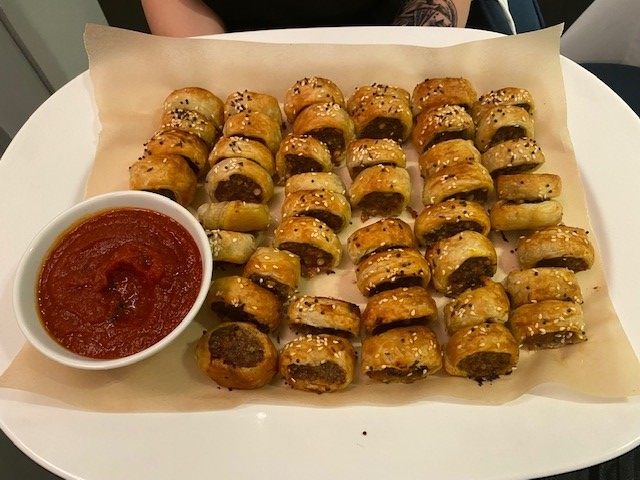 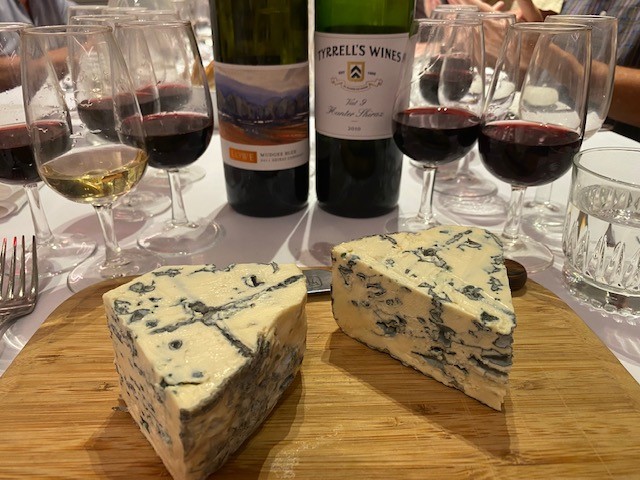 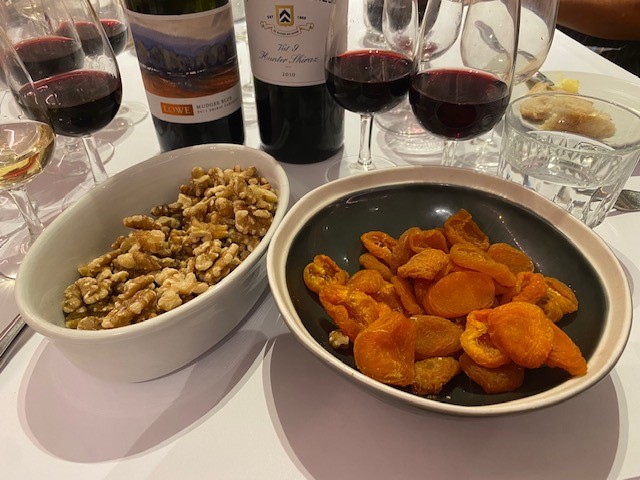 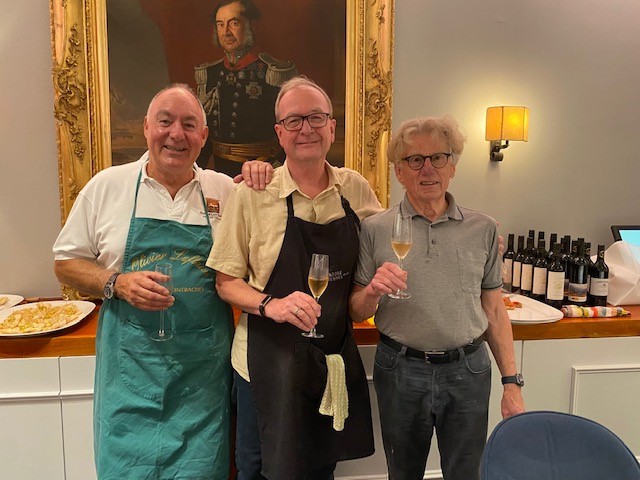 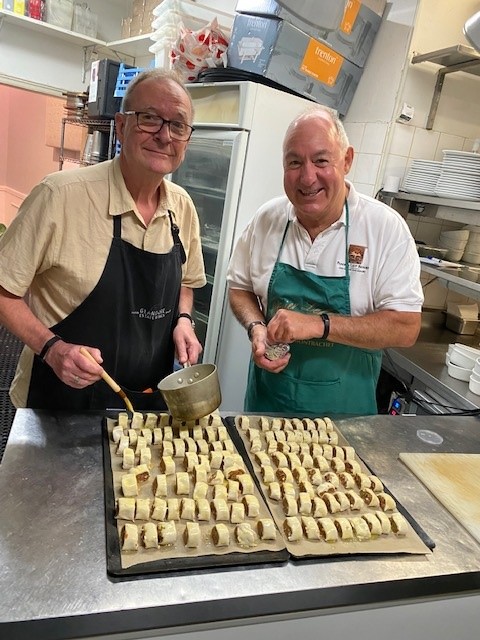 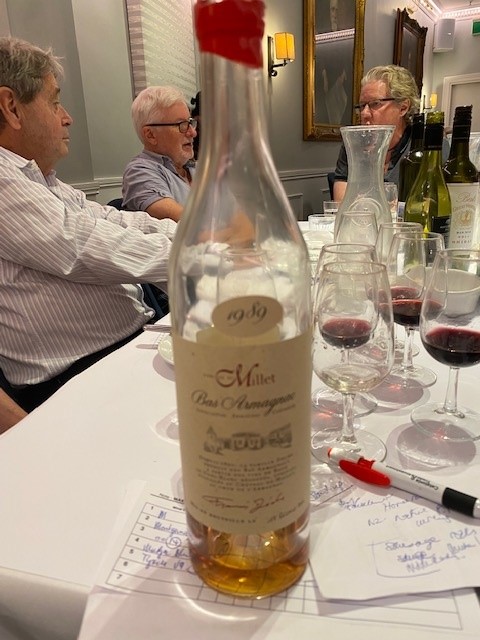 It was a welcome return to the kitchen today for Keith Steele ably assisted by James Tinslay and Paul Ferman on canapés.

Still dark, wet and damp it didn’t deter our faithful members with maximum bookings and the mood at lunch was light with members' comments verging on stand up comedy.

Canapés were plentiful today and the quantity was favourably welcomed by members when commenting about the lunch.

First up Keith sent out curried egg on pappadum. The weather softened the papadums somewhat however this meant it was easier to eat rather than crumbling. Very tasty.

Paul was up next with two canapés served on gluten-free bread with some horseradish cream while the bread was a vehicle for the canapés it was a little too thick making it chewy and we lost a bit of the unique flavour of the topping.

The topping was made by the famous Fish Butchery “pepperberry cured Ora King salmon” (Ora is the NZ salmon) and Spencer Gulf Kingfish mortadella.

Both had great flavour with the mortadella made in the traditional way with olives and the unusual addition of milt (Google it).

James Tinslay sent out his signature dish, sausage rolls, this time a variation today with a Moroccan theme. The meat was home ground beef mince 70% and 30% chicken mince.

They were topped with seeds: black mustard, sesame and cumin. Again very popular with our members. James's homemade sauce went perfectly with the rolls. A rather expensive sauce James left it at home and he had to organise a special delivery.

Keith reprised a dish he’d last cooked at Lower Fort street “Syrian Chicken”. Lots of flavours made with ginger, onions, garlic, saffron and tomatoes plus some black currants to add a little sweetness with some residual heat from the chilli. It was served on a bed of couscous with some snow peas.

A good hearty meal with texture, good flavours from the balanced spice mix. Keith cooked the dish with a skinless thigh and comments thought using ‘skin on’ may have added a little more moisture.

Keith is always willing to guess the cheese and the percentages are in his favour. Today he requested a blue cheese but unfortunately, his choice was not available however we enjoyed the substitute.

It was a Saint Agur an artisan blue cow’s milk cheese from Valey France.

Made from cow's milk with added cream, this modern cheese was developed from an old monastery recipe as a creamy cow's milk alternative to Roquefort. The flavour of this popular cheese has been developed using a special selection of ‘designer’ blue moulds which are cultured on rye bread and crammed into the curds just before hooping. After three months of maturation, the cheese develops a rich creamy texture and distinctive blue flavour.

It was served with walnuts and dried apricots.

We finished the afternoon with a 1989 Bas Armagnac courtesy of James Hill for his birthday.