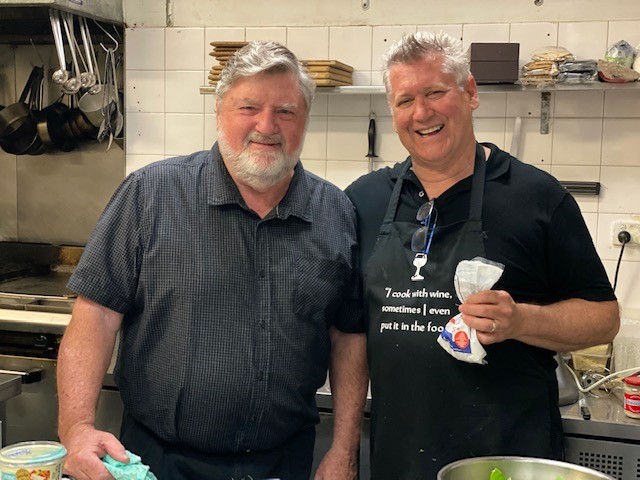 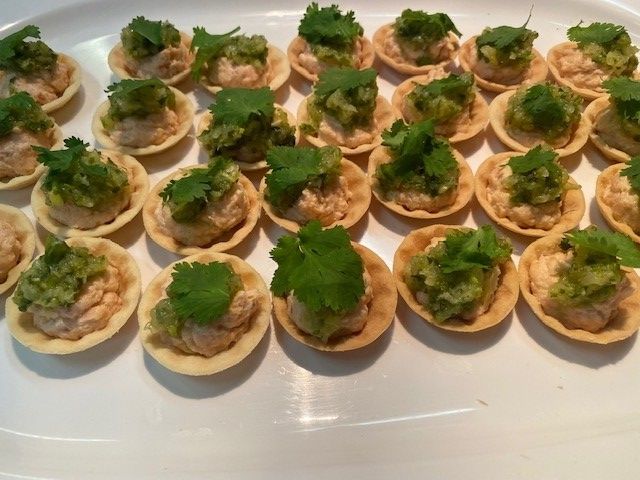 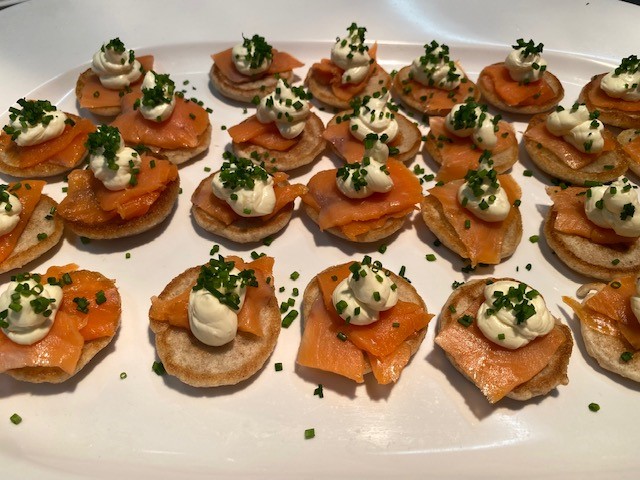 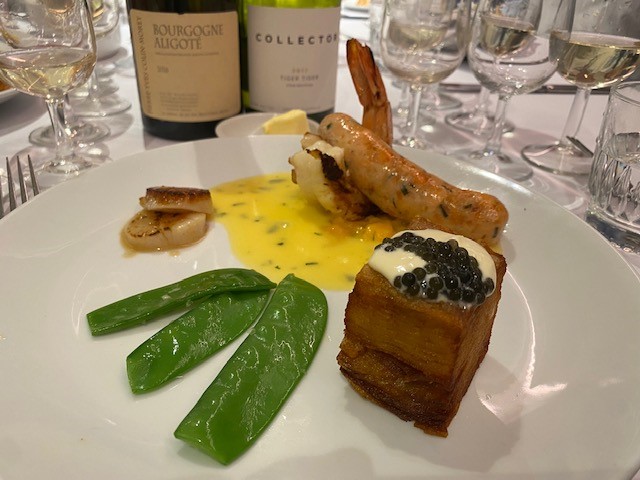 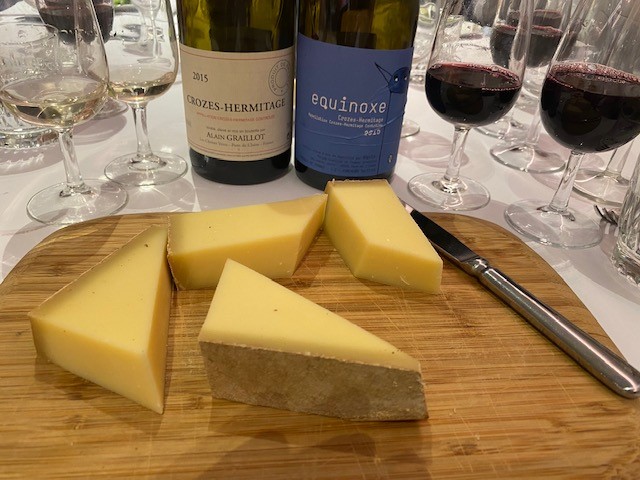 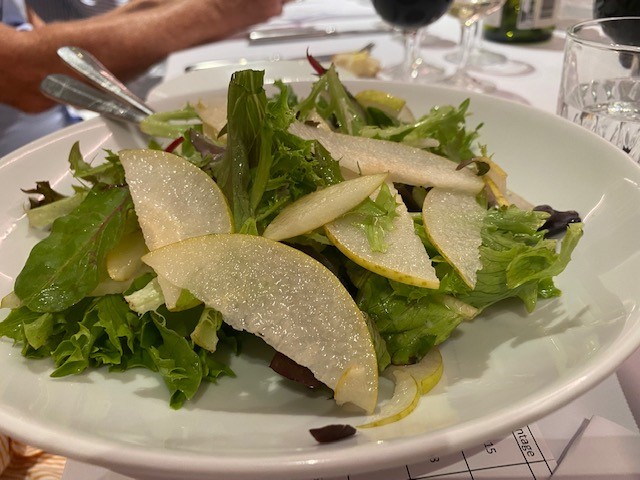 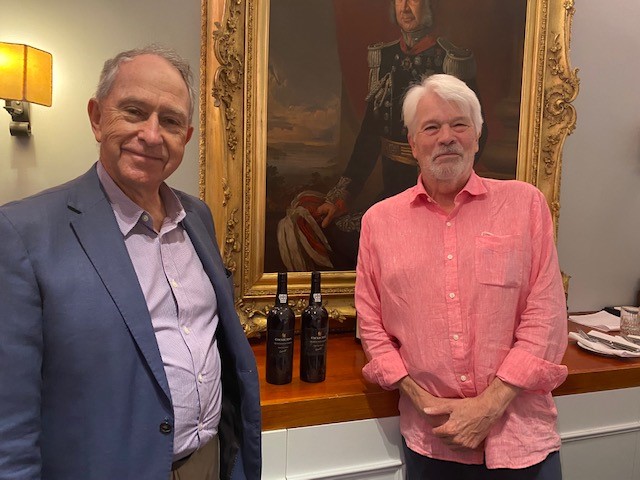 Please Sir, there is something fishy about my sausage!

Hmm, when reading about what the upcoming meal was going to be, orchestrated by Nick, having not had one of his seafood sausages before I have to admit that I was somewhat dubious, not really having a great love for the usual mystery bags.

However, as it was Nick and in the past, his cooking has always been excellent, plus ably assisted by Steve Sparkes, who was I not to try something new?

This meal was one of the biggest surprises that I have had in the Society.  It was definitely a case after the meal was tasted and consumed with the vigour that it went to “Please Sir can I have some more!”

Not trying to influence any outcomes, but personally, I hope that Nick wins the chef of the year in this round of cook-offs, as he will then need to recreate this meal and all of us (those who book early), will get to have it again.

This just demonstrates that the quality and diversity of what our members are now serving up to us is of restaurant quality, if not much better.

It is also now an interesting quandary that we find ourselves in.  Irrespective of the official numbers on inflation, most of us know that there has actually been massive inflation on the goods and services that most of the members utilise and consume.  (This is because the official figures are heavily weighted towards goods and services consumed by younger demographics… new cars, fitting out a home etc).  Therefore, as the average costs of ingredients rise for these superb lunches now being produced by our members, we may shortly need to choose between either having the same quality of food at an increased luncheon cost or degrade the quality of what we are serving.

Back to the seafood extravaganza.

The buckwheat blinis with smoked salmon, horseradish cream, cheese and chives were the first creation served.  Unfortunately, Nick had accurately counted how many entrees would go around in each swirl of the floor.  There were many disappointed looks when the second round of these blinis made their way around to each of us without any leftovers.

Steve Sparkes produced his tart with smoked trout pate and pineapple salsa. The pineapple added an extremely interesting flavour, more like a lime mint.  It was exceptionally refreshing and a true palate cleanser.

The wines will be completed by another author, however;

The Entrée wine was a 2015 Tapanappa Eden Valley Riesling.  It went well with the seafood entrees.

Wine For the mains, given the seafood theme, we also had a couple of whites;

The 2018 Pierre-Yves Colin Bourgogne Aligote and the 2017 Collector Tumbarumba Tiger Tiger Chardonnay.  There was much debate on which went better with the food and it seemed to vary as the meal went on.

Now, this was a surprise when it came to the plate with a fully erect, firm, Mooloolaba jumbo prawn teasing and tempting the diner. Resting under it was a homemade fish sausage, made from hand diced salmon and ocean trout, smoked trout, egg white, cream, and pork back fat.  Served on tarragon beurre Blanc sauce.  In addition, was a mango salsa, Canadian scallop, butter glazed snow peas, and deep-fried forty-layer potato pavé with creme fraiche and Beluga caviar. Now that is an artisan’s work.

It was absolutely delicious and my money is on this dish to take away that crazy crustation trophy.  If Nick does win this, it means he will have to replicate this meal and if this does occur and you missed this one, you would be disappointed to miss his repeat performance.

The cheese wines were both 2015 Crozes-Hermitage Syrahs; one from Alain Graillot and the other from his son Maxime Graillot, whose wines come from a single vineyard near the village of Beaumont-Monteux, only a couple of kilometres from his father's vines (Alain)

To go with the French wines, it required a French Compte

Now, this was a great cheese served with baby salad leaves and nashi pear.

Comte is made from unpasteurised milk, its quality and flavour characteristics vary between producers, and most examples are sold simply on the basis of age. This is no guarantee of quality. Every batch is different and influenced by when the cheese was made, and where and how it was ripened. This cheese was matured in the damp underground cellars of Marcel Petite at Fort Saint Antoine high in the mountains that border France and Switzerland in the Franche – Comte. It’s specially selected to wear the prestigious red ‘crown’ of quality on the basis of its rich concentrated nutty texture, elegant caramel sweetness, and a lingering kaleidoscope of flavours rather than on how long it was aged

Peter Kelso was having another birthday and he was kind enough to bring along a couple of bottles of the Cockburn’s Quinta Dos Canais Port, which went down very well with the cheese.

The coffee was the house blend and next week we look forward to what the ever-reliable, wearer of many hats, James Hill will serve up to us.