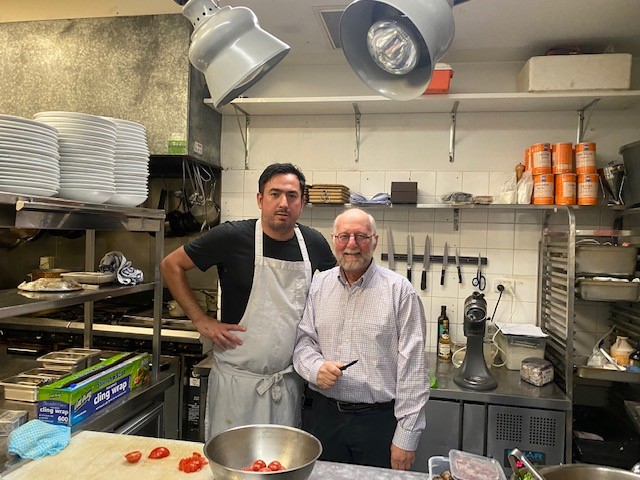 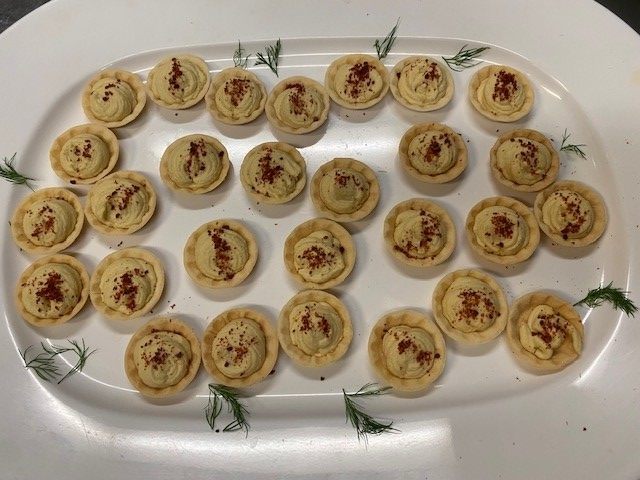 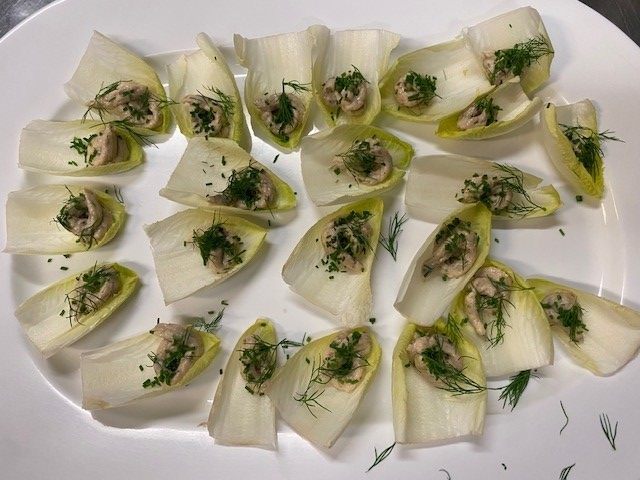 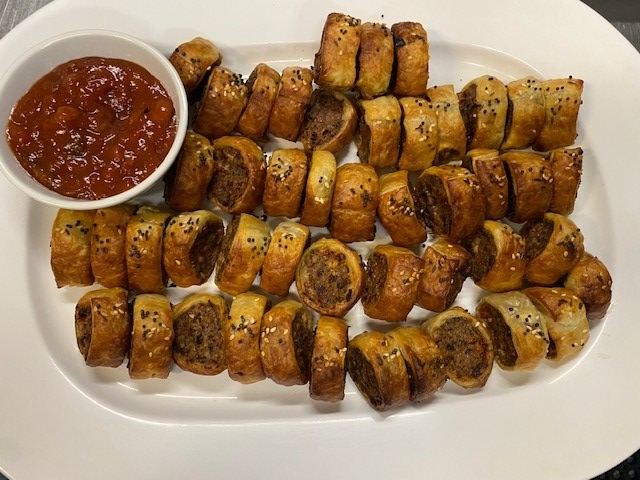 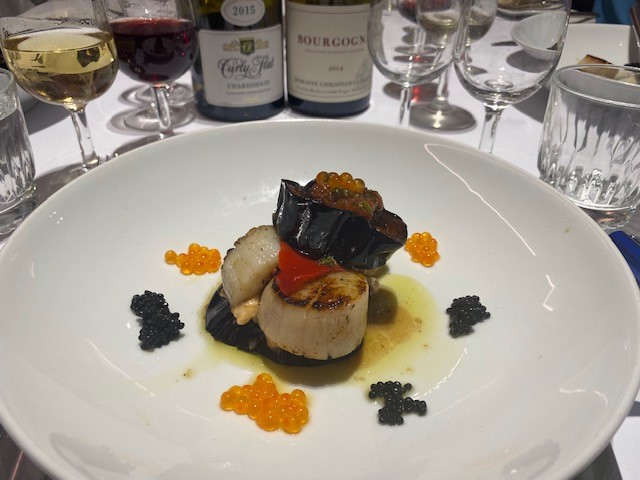 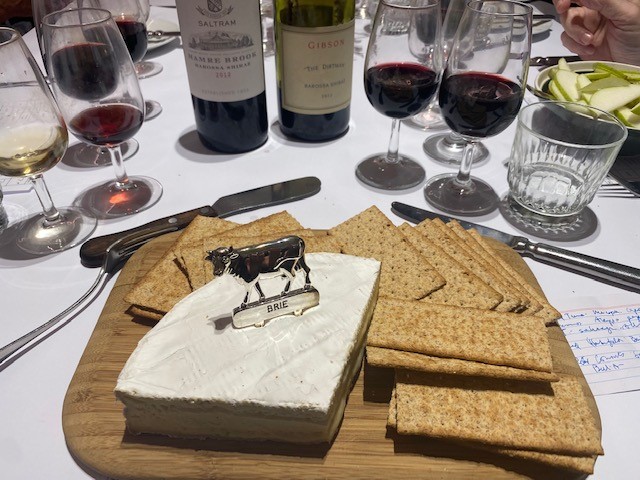 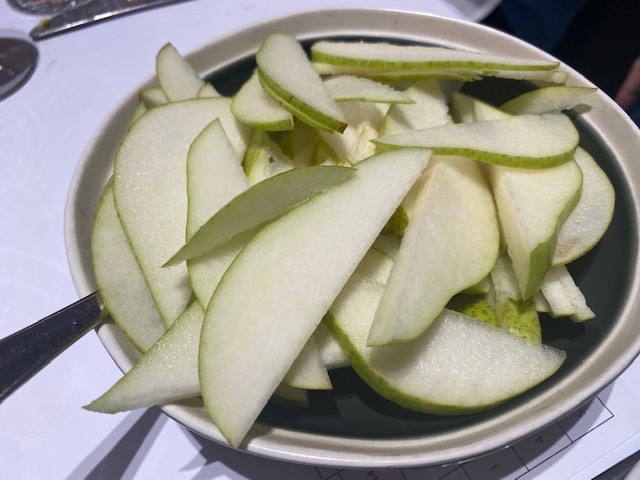 Tuesday marked the fourth Chef of the Year Cook-Off, this time with James Hill taking us on a foodie tour of Greece.

James was ably assisted by James Tinslay, who did a riff on his extremely popular sausage rolls and our Foodmaster, Bill Alexiou-Hucker, who provided home-made white Taramasalata for the main course.

James served two appetisers. The first was tuna blended with mascarpone, capers, dill, chives and lemon zest presented on a witlof leaf which gave a bitter, crunchy counterpoint to the dip. The second was hummus bi tahini, served simply in a plain tart shell. James commented that he made this with Australian organic chickpeas, which are globally highly regarded.

As a self-proclaimed foundation member of the Sausage Roll and Wine Society of NSW (SR&WS of NSW), James Tinslay adapted his popular sausage rolls to fit in with the Greek theme. Lamb-based, they were augmented by Spinach, Feta, Onion, Red Capsicum, Greek herbs and garlic, lemon juice and zest and that old Greek standby, Panko breadcrumbs. Served with a Tomato Chutney augmented with Kashmiri Chili (apparently from an extra island in the Dodecanese). The rolls were both delicious and filling. Several members ate large numbers of these, thinking that they were the main course. The appetisers were served with 2014 Tyrrell’s Belford Semillon which was an elegant wine with intense fruit that was drinking well at this age.

The main was a reprise of the visually stunning and much-praised Eggplant and Scallop dish that James cooked last year. The dish is a variant on a seafood moussaka originally created by Peter Conistis, Sydney’s Father of modern Greek Food. A fried eggplant slice was lavishly covered with White Taramasalata, topped with three perfectly cooked Canadian scallops, followed by strips of roasted red capsicum, another slice of eggplant, and finally topped with a rich tomato salsa. The presentation was enhanced by generous servings of salmon roe and avruga caviar. A feast for the eyes, the flavour combination was exceptional. Some felt that the eggplant skin was a touch tough compared to when James has cooked the dish before. Chilly Hargrave had an each-way bet by matching both a white and a red wine with the dish. The white, which many felt was the ideal match with the food, was a 2015 Curly Flat Macedon Range Chardonnay. A more traditional Australian Chardonnay, it was well oaked with well balanced peach-melon fruit. The weight of the wine matched that of the food extremely well. The red was a 2014 Christian Clerget Bourgogne Rouge which was both elegant and attractive with good cherry fruit and soft tannins. Many considered this to be the wine of the day.

Our Cheesemaster James Healey presented a Le Marquis Brie made from milk from a small herd of pampered Fresian cows. Made in a modern, purpose-built Fermier in the Ile de France the cheese came to the table in excellent condition accompanied by sliced William Bartlett pears and Italian whole-wheat crackers. Two 2012 Barossa Shiraz wines were served with the cheese. The pick of the two Shiraz was a Saltram Mamre Brook which was a big sweet, fruity wine with plum, black pepper, and good length. The second was a Gibson Dirtman, which conversely was somewhat tired, dry and astringent. Phil Laffer commented that Matt Holmes, who was distributing the wines on the day, served the reds direct from the wine fridge at 15C, which was a perfect temperature for these big wines from the Barossa.

The lunch was also an opportunity to welcome three new members: George Peters, Brian Dunn, and Paul Touma. They certainly picked a great lunch with which to start their Wine and Food Society journey.