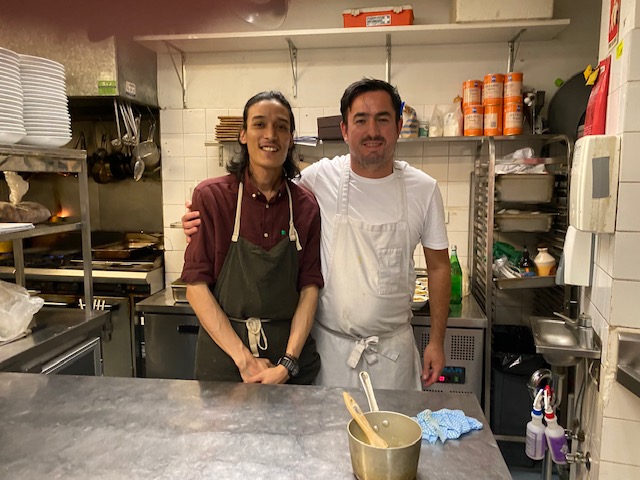 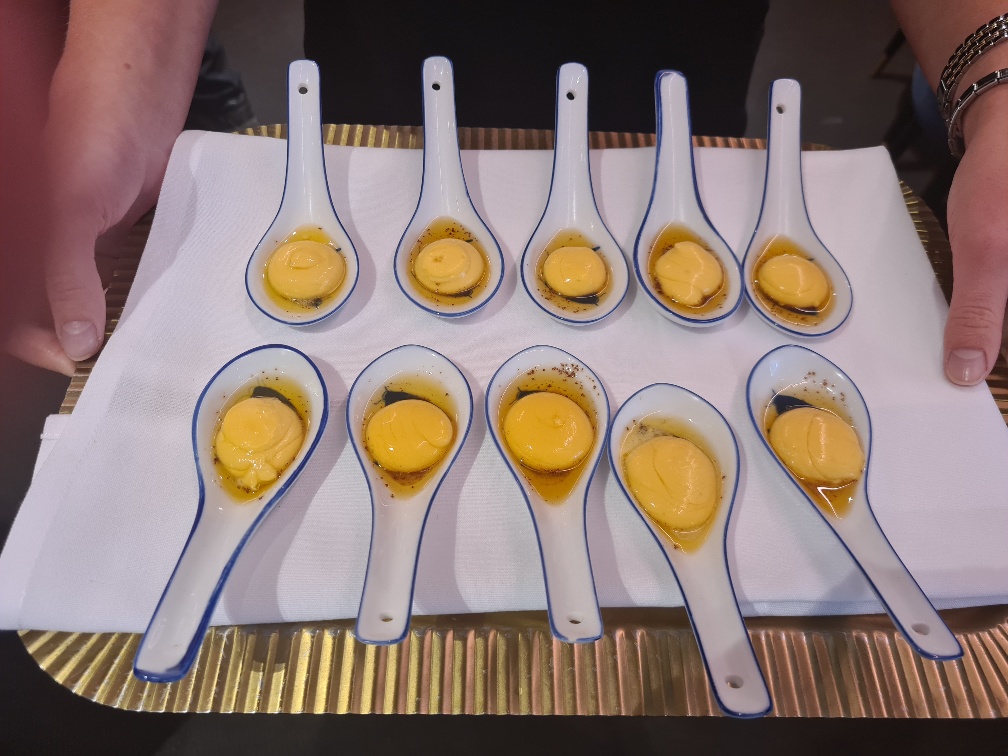 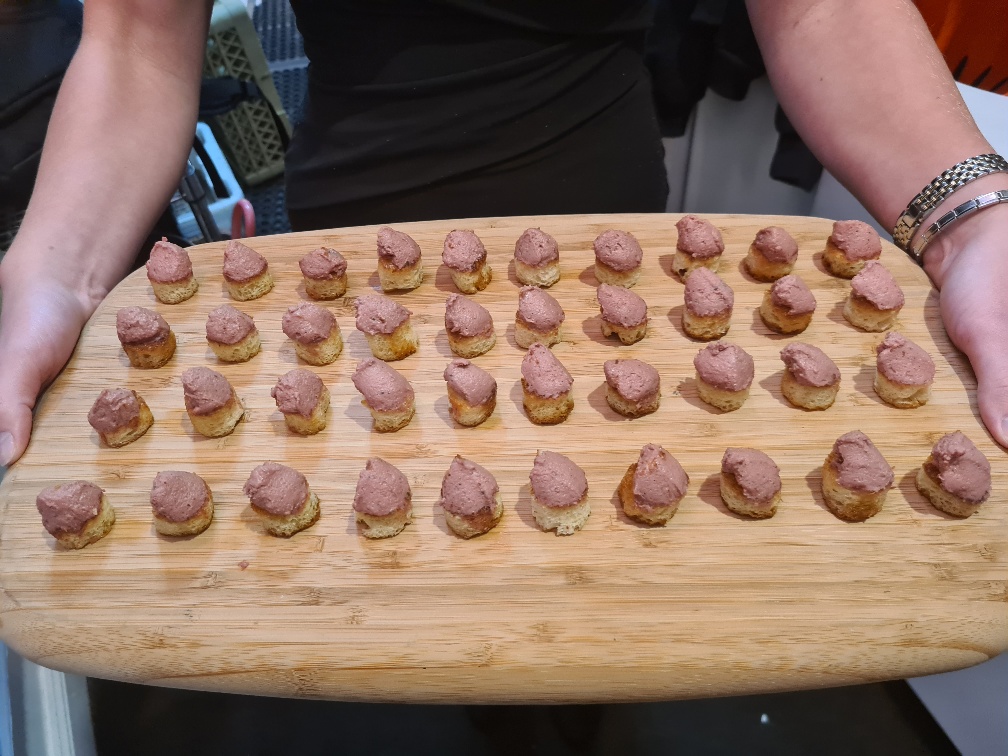 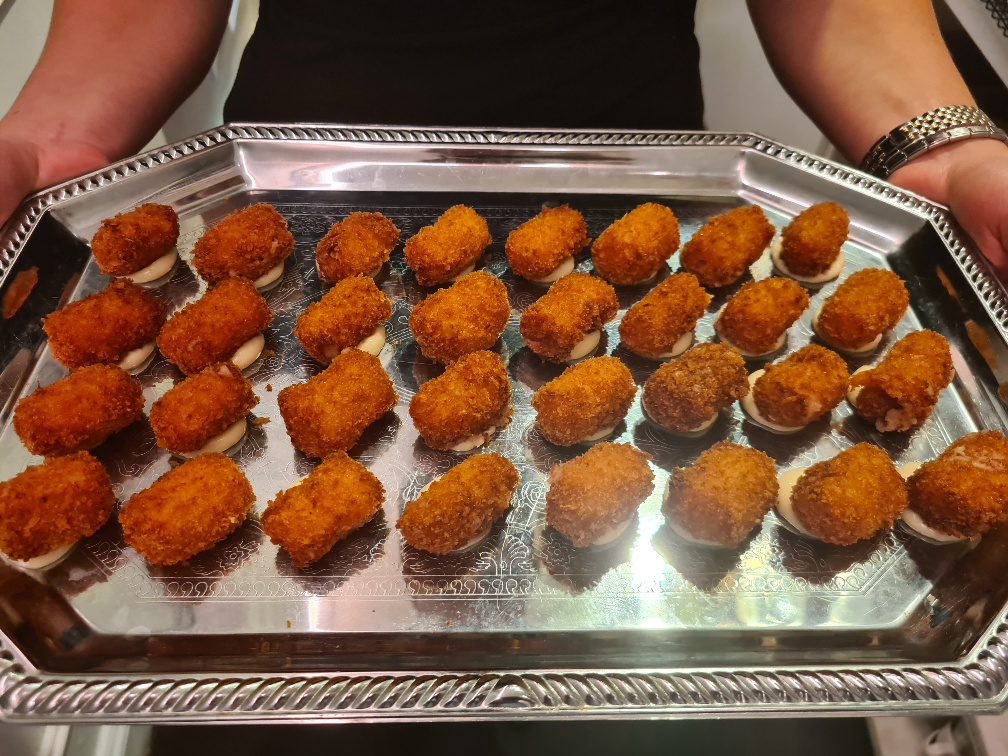 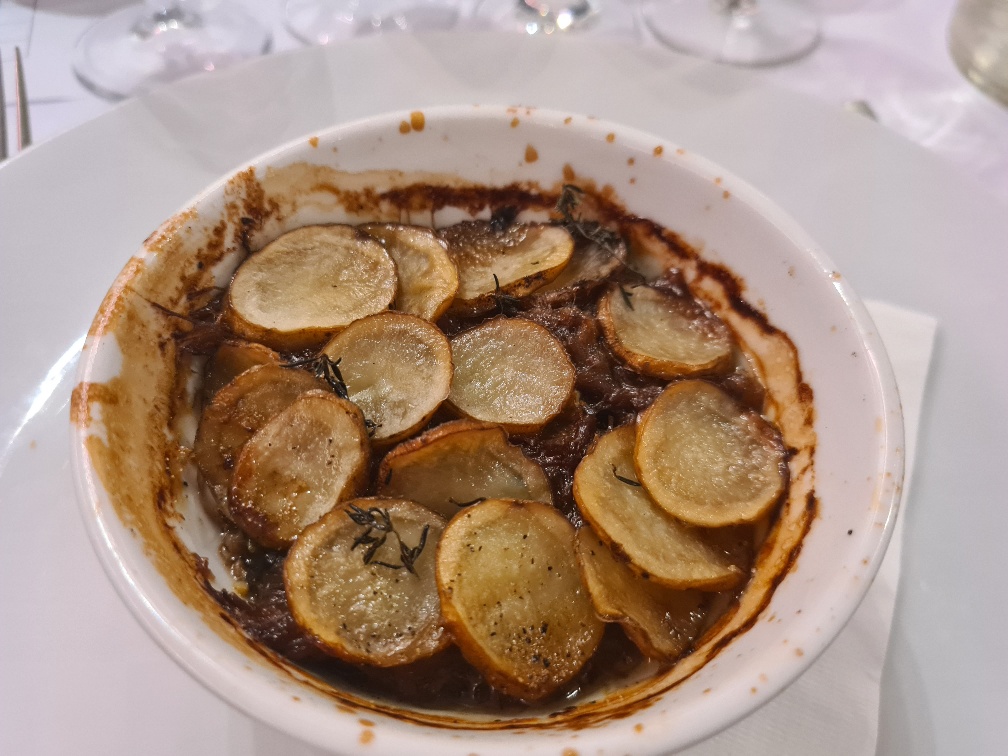 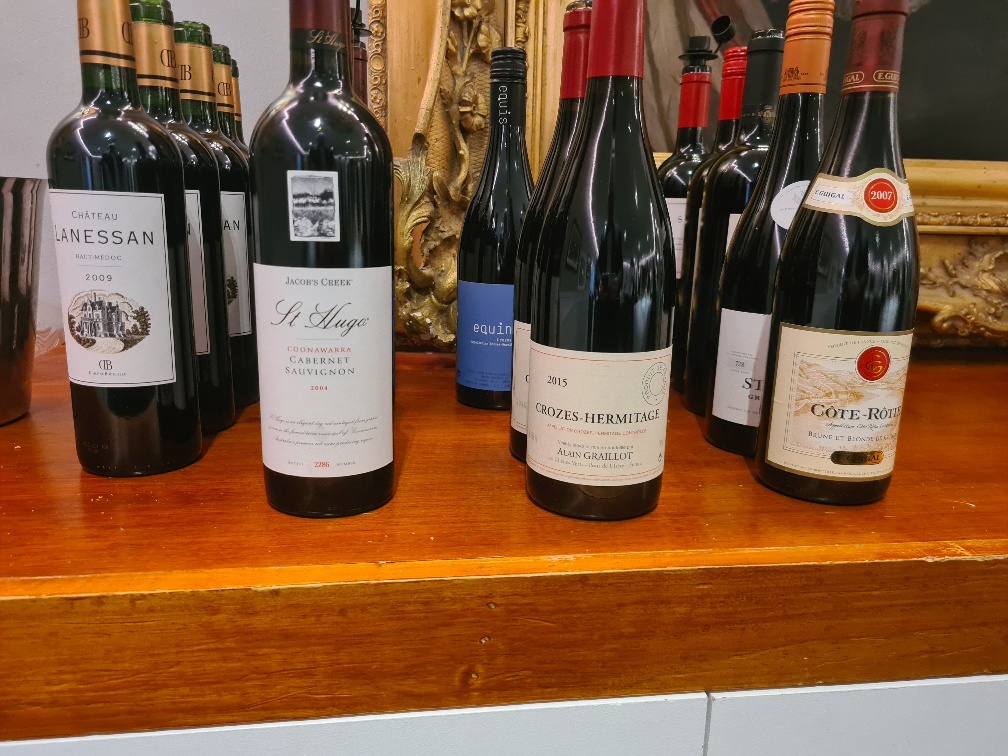 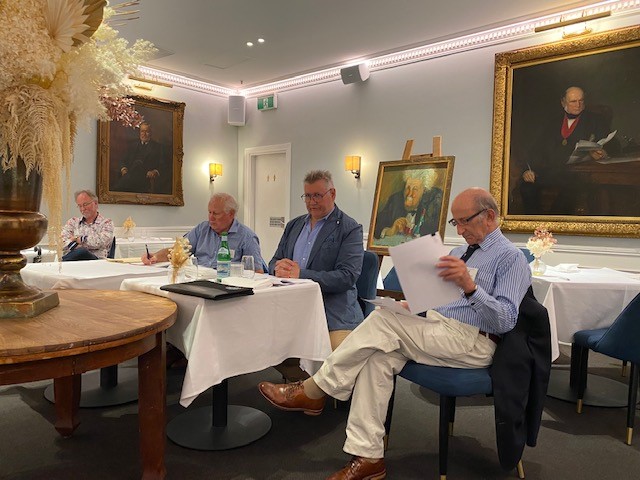 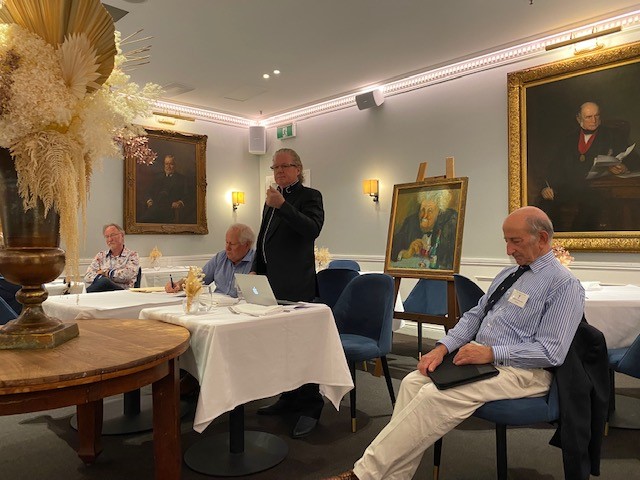 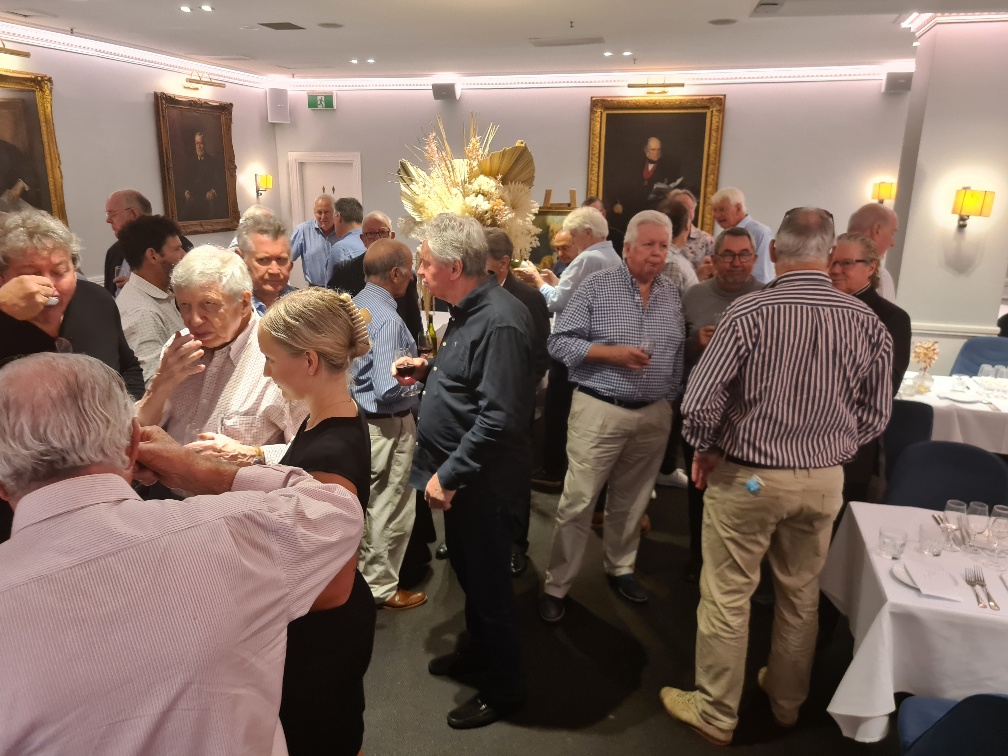 Resident Chef Rob Doll did his usual excellent work with today’s lunch.  For starters, we had some chicken liver pate Brioche toast. Delicious. Next to follow were Serrano Ham croquettes, wonderful.  My choice on any menu.  Finally, there was a liquid butternut gnocchi, which must have been very nice as it had vanished before I could get within range!

To finish off we had a La Dame goat's milk cheese.  I am normally a great fan of all the cheese we are lucky enough to enjoy at the Society lunches, but not this one.  Neither a hard nor a soft cheese, it was a bit lost. Texture and flavour I found to be a little on the soapy side.  But I am aware that others in the room liked it.  You pay your money; you take your chances!

At the conclusion of the AGM, pre-lunch wines were served. The Cellarmaster produced a wine that was a surprise to us all. A 2008 Gouais from Chambers Vineyard in Rutherglen.  Some research indicated it was from Ancient Europe, not well regarded and thought of as a peasant’s wine, notwithstanding that it is considered as possibly being the father of Chardonnay and Riesling grapes. We did the wine no favours by keeping it for so long, the wine being well past its prime.  Chambers say they make only a small amount, which I think is a good thing for wine lovers generally.  I hope this is the last time we see this wine.

The next two wines were Pinot Noir from the Yarra Valley.  A 2012 St Huberts and a 2016 Tarrawarra Estate.  I am normally a fan of wines from St Huberts, but not this one. Too long in the Cellar, allowing the fruit and acid to fall away. A pity, still drinkable but would have been far better 4/5 years ago. The Tarrawarra was a fine PN, but in my view served far too cold. Slightly chilled PN is quite ok, but this one was over chilled, masking some of its very appealing fruit.

The first bracket of the lunch wines were two Cabernets, one from Bordeaux and the other a local from Coonawarra.  Both were excellent. The French wine was Chateau Lanessan from 2009, a very reliable producer, and the local wine was the ever-popular St Hugo from 2004. I enjoyed both. The French wine was balanced, elegant and restrained. The St Hugo would have nothing of that, a real flavour bomb.  At first look, I was thinking that it might be a little tired at 18 yo and with 14.5% alcohol, a stewed fruit finish.  But no, tons of flavour with a clean aftertaste.    The room had as expected varying opinions, mainly in favour of the French, but I personally was in the end attracted to the St Hugo.  Both wines were good examples of the distinction in style between the French and the local Cabernets of good quality.  A matter of personal preference.

The second bracket at our table consisted of two Shiraz, Best’s 2012 Bin 1 and a Guigal Cote Rotie 2007.  I could not fault either.  Good fruit balanced and clean finish.   The Best’s had I think the edge in flavour, but there was not much in it.  All four wines went well with the main course and cheese.

I am informed that some tables had different wines in the last bracket to what our table had, however as I did not see these wines I cannot comment.

All in all, an enjoyable afternoon to wrap up the AGM for 2022.