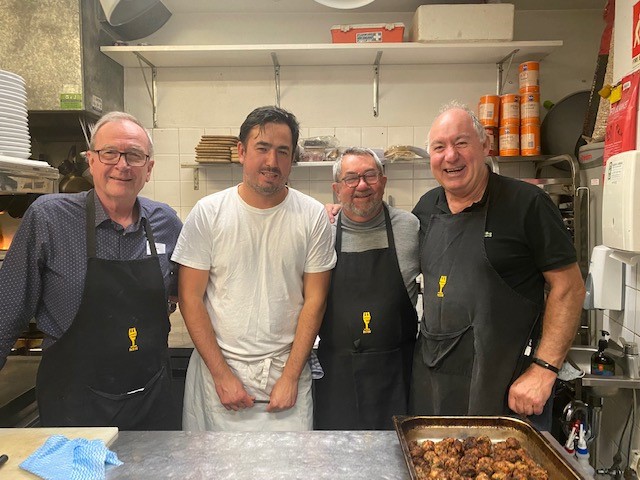 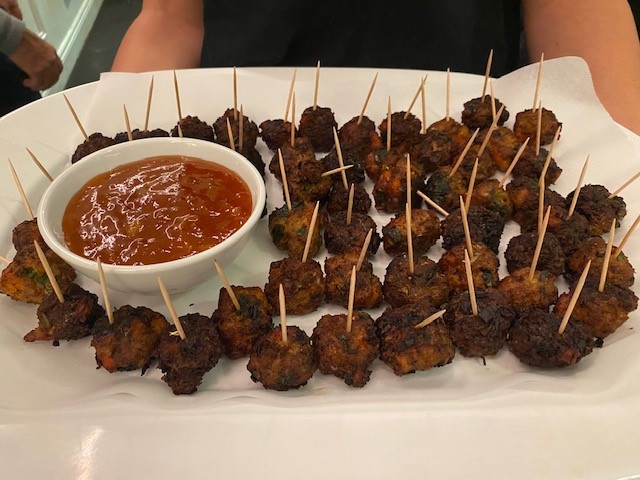 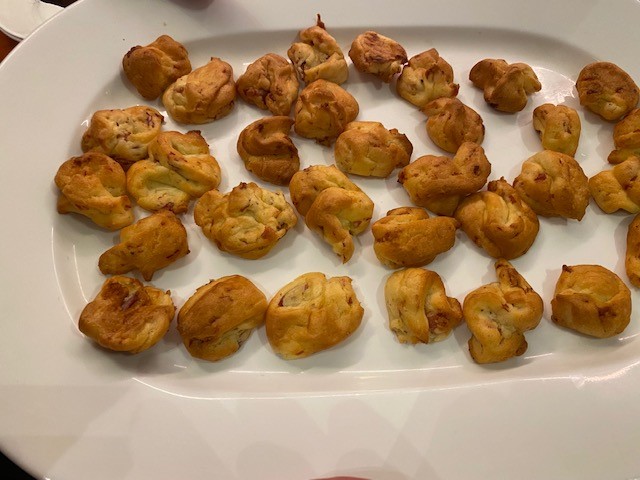 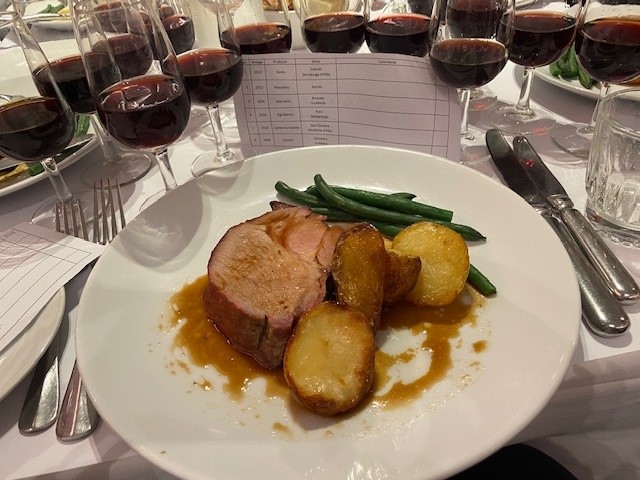 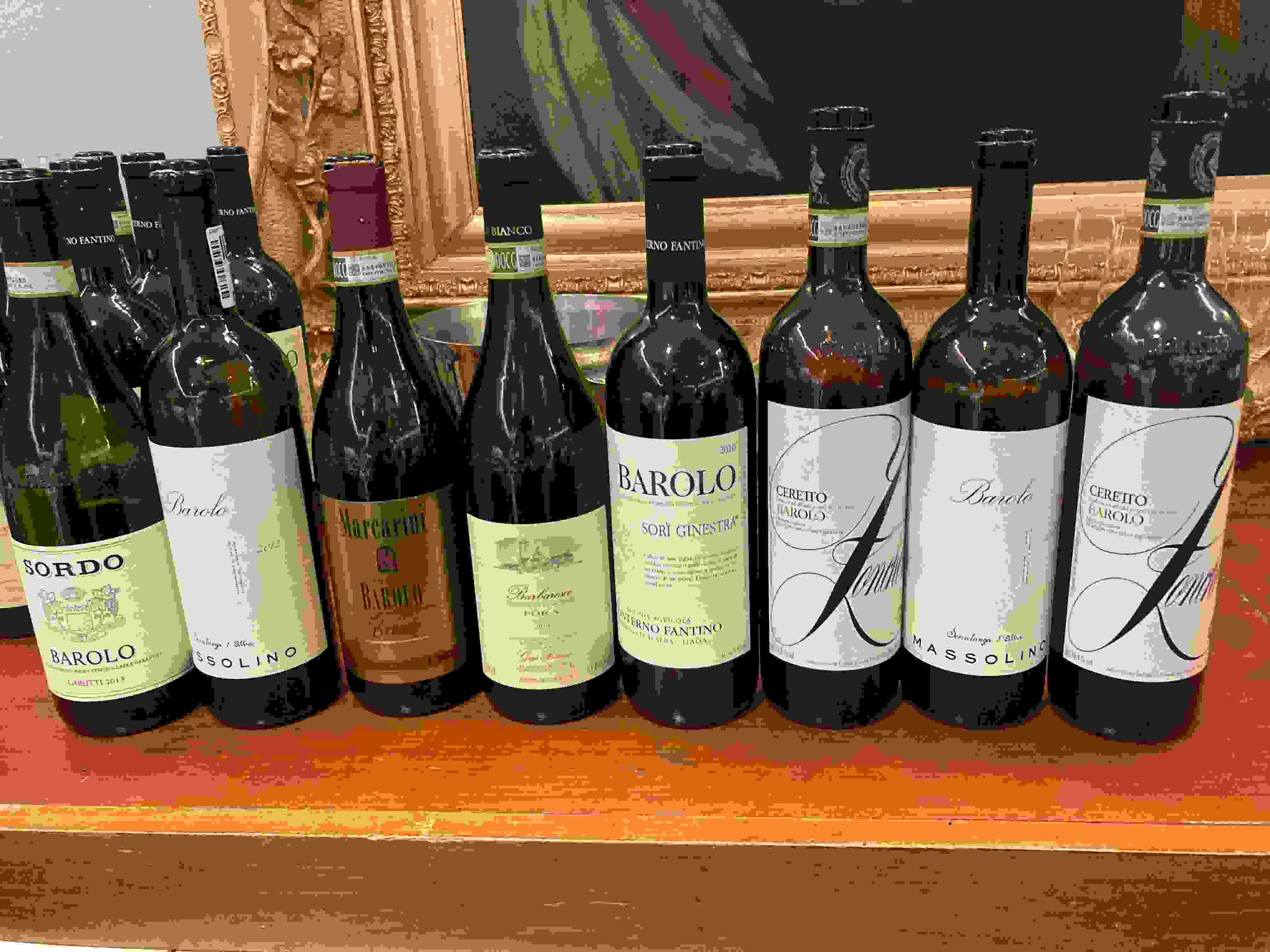 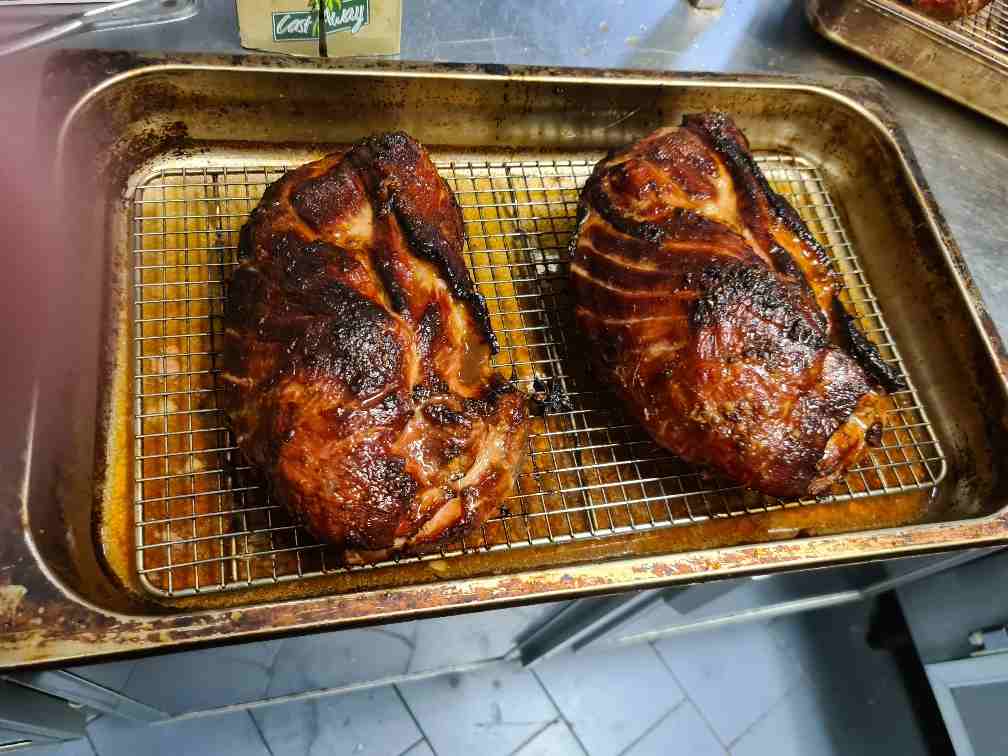 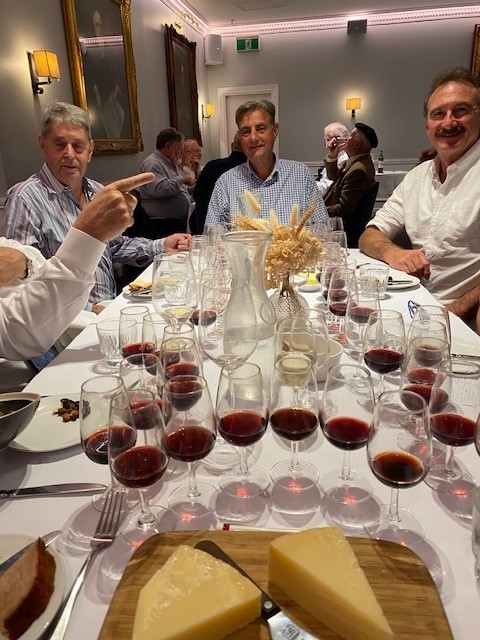 Keith Steele and David Madson combined to create some delicious canapes for the near-full room. An excellent response from the membership to today’s lunch. We were treated by Keith to some prosciutto and cheese puffs with parmesan and pecorino and some very tasty prawn &and pork balls by David. Both went down with the aperitif wines, a batch of Hunter Semillons. More later.

The main was a very generous slice of sticky slow roast pork neck with Chinese spices  The pork had been marinated for 24 hrs in a combination of Chinese cooking wine, brown sugar, sesame oil, ginger and garlic. Some star anise and light soy also featured.  It was slow-cooked for 3 hours and served with some nice roasted duck fat potatoes and green beans.  My serving was near perfect, juicy, moist and full of flavour.  Very excellent. I did however hear some faint grumbles around the table about their particular slice, such is life!  We have all been there, I often get food envy, it’s part and parcel of eating out.  I am aware that pork can sometimes be dry, but not this time. A lovely main thanks to James Tinslay.

James  Healey produced a  cheese that caused considerable debate around our table. Described as a semi-hard cow’s milk cheese from the mountains in Northeast Italy the  Montasio arrived at our table in great condition but challenging anyone to cut thru the crust. If that is semi-hard, I tremble at the thought of attacking a hard one.  However, after a struggle to get access to the core, it was well worth the effort! Delightful,  well-chosen James.

Cellar Master Hargraves really opened the silk purse division of the Society’s Cellar for today’s lunch.  Five excellent Barolos  and one Barbaresco . Where else would you get a lineup like that! It makes investment in WFS membership a very sound decision.  Consider the fact that the wines we had today command prices between $ 200 and $ 500 per bottle and you get these wines plus an excellent lunch for $90!  Has to be the best deal around.

Looking at this bracket it was clear to me that all wines with exception of wine 5, the Conterno, were mid red brick in colour, with the Conterno much darker  The  Massolino and the Cerrato showed some hint of browning around the rim.  All wines were quite tannic with high levels of acid.  Alcohol levels were in the 14/14.5 % range. With exception of wine 6, the Ceretto, the wines had very little bouquet.

Trying to sensibly assess these fine wines between themselves is challenging. A bit like trying to pick your favourite in a Miss World contest.  With some fear of strong contradiction by those present, I felt the Ceretto was the pick of the bunch, just ahead of the Conterno.  The Barbaresco was in the middle and the Massolino was the last to greet the judges.

I am well aware that these wines are wonderful food wines, however sometimes I feel after my last sip that there must be something more, some more thrilling final lift on the back palate, but no,  gone. But wanting more. Like a kiss from a pretty girl, but just a kiss.

I have enjoyed many fine Bordeaux wines over the years which seem to have a  more satisfying mouth-filling, lingering aftertaste, leaving one fully contented, daydreaming of the Terroir, the wind and fields and soil of the  Medoc.

Getting back to Australia however, the two aperitif wines we had were both excellent. Both were Lindemans,  one a Bin 0755 from 2007 and the other a  clean skin, but identified as another Lindemans from 2005.  These years were regarded highly in the Hunter for the Semillon and Chardonnay. I can see why.  Despite the fact that the wines were  15 and  17 yo they were both in terrific condition, clean, balanced full of flavour.  No wonder these wines from a good year are in a class of their own.