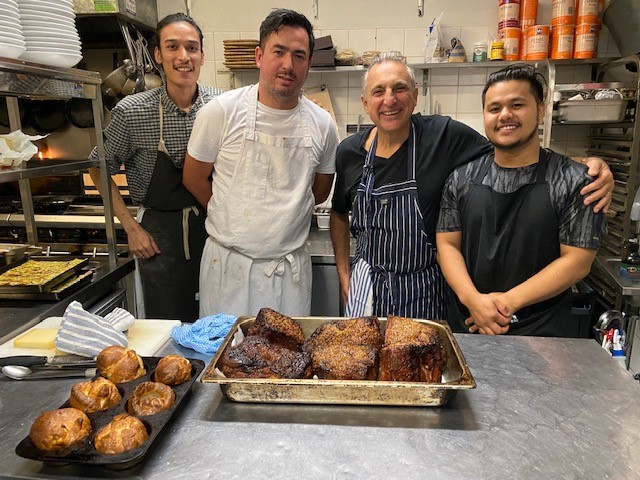 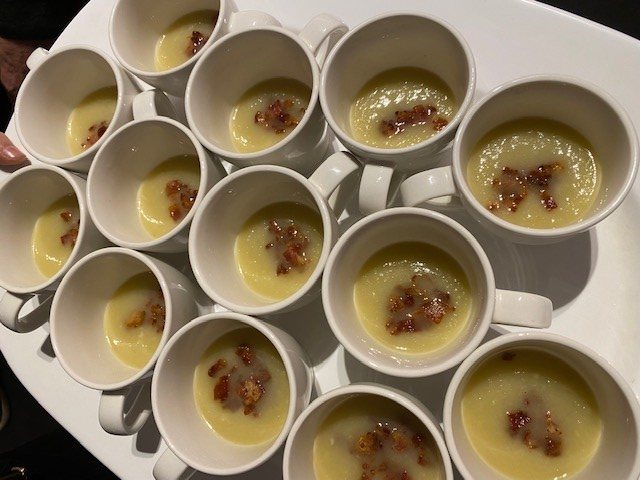 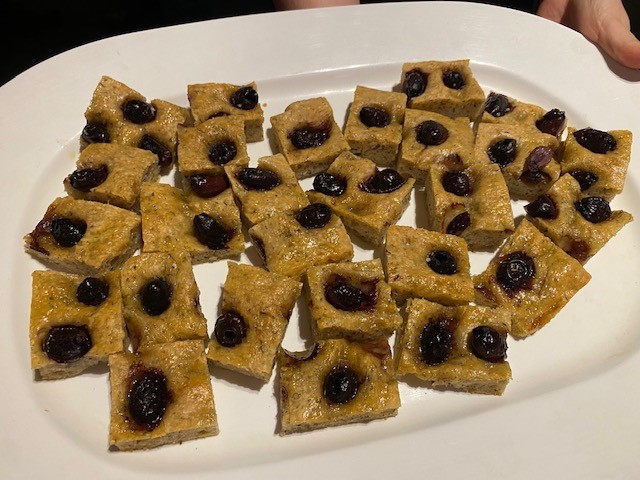 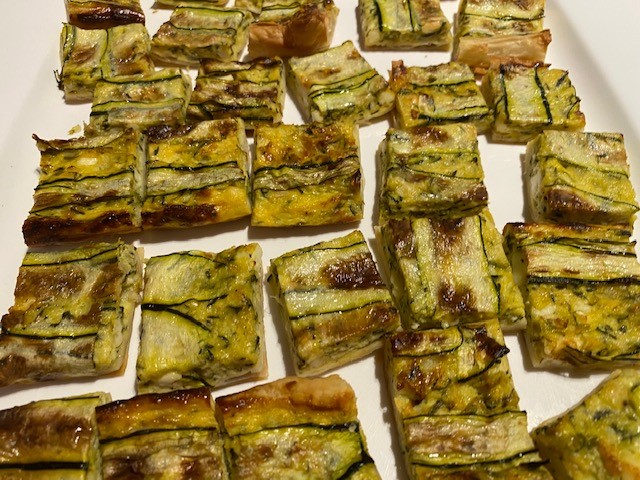 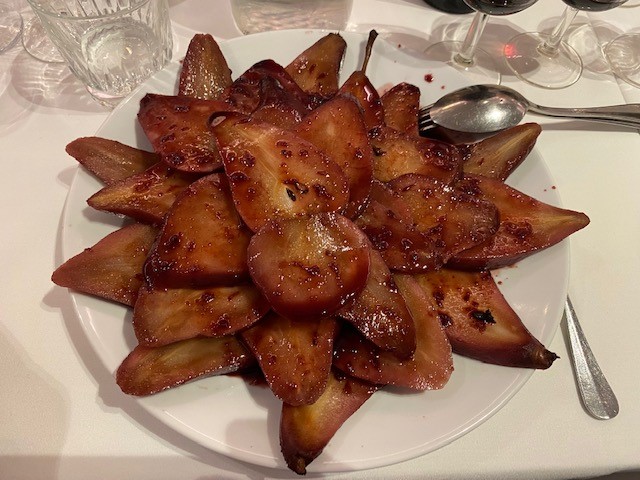 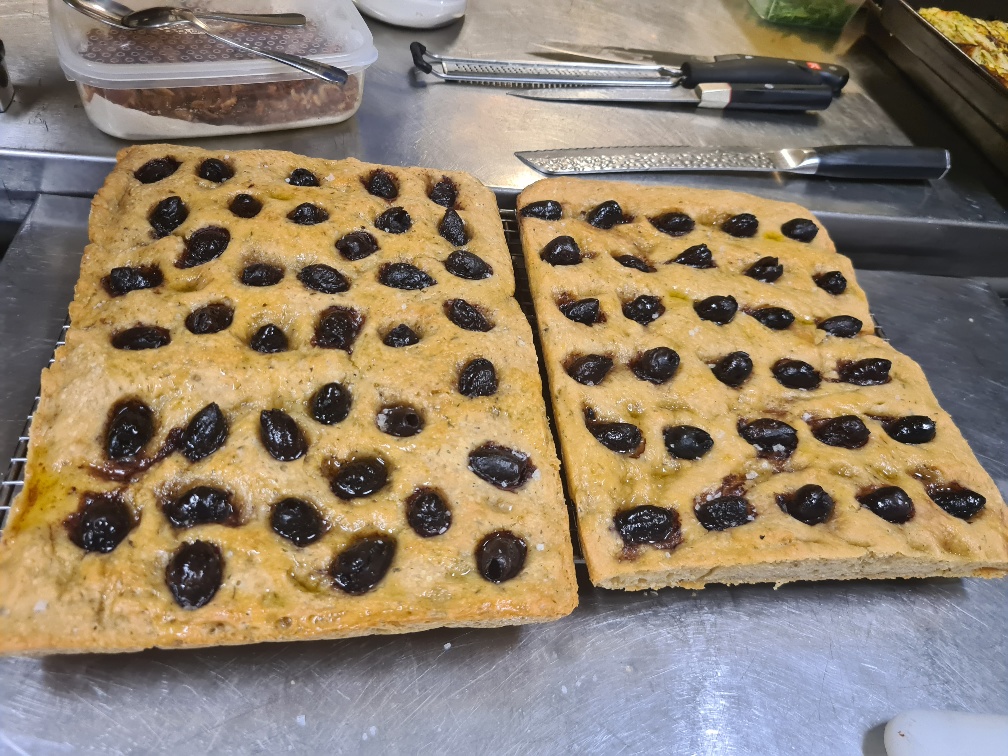 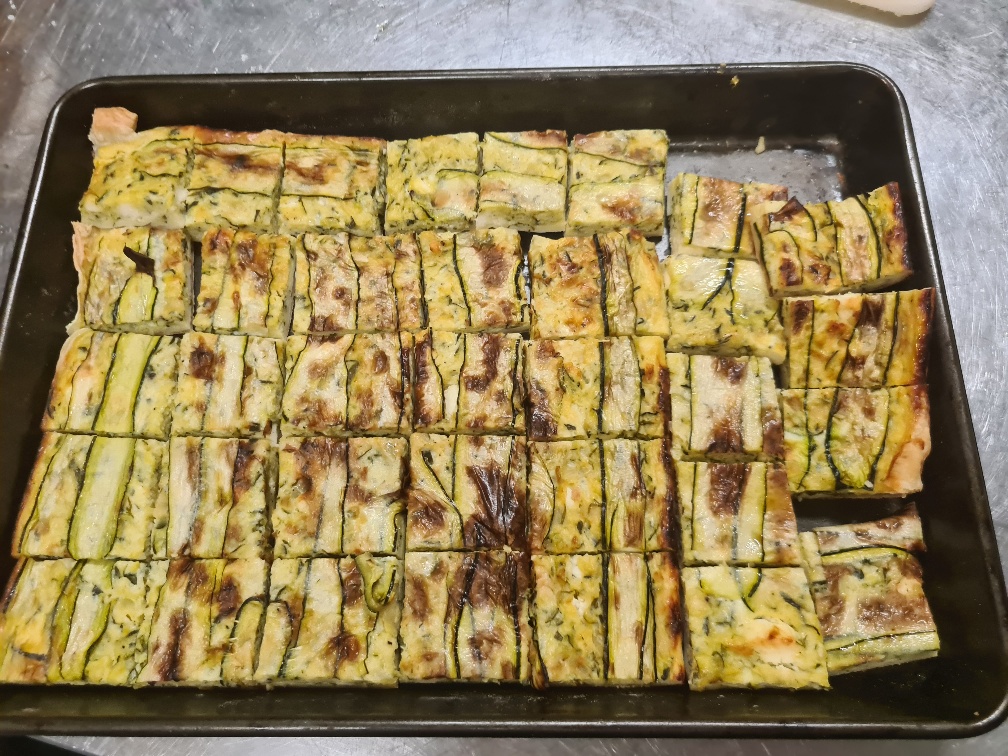 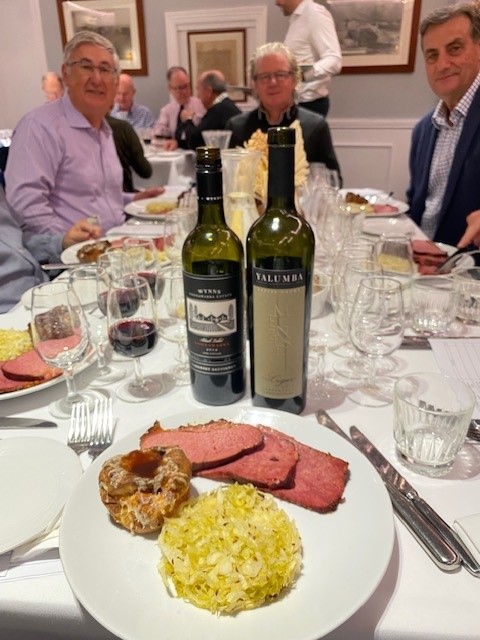 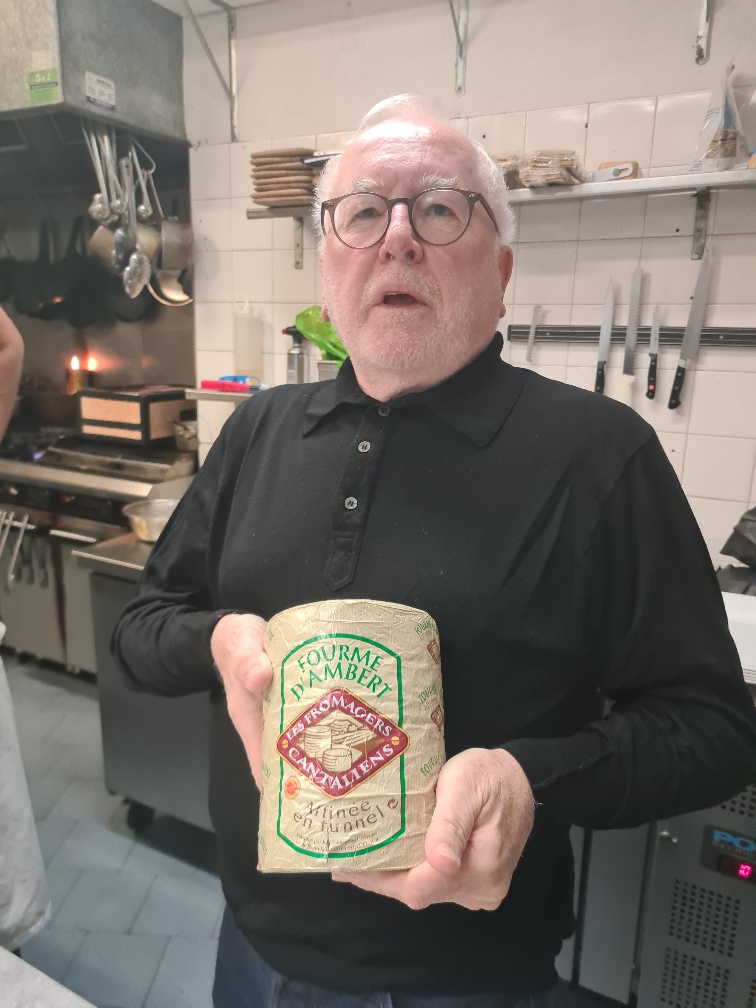 Our Foodmaster, Bill Alexiou-Hucker, was in the kitchen today and as always, the meal was solid with nobody going home hungry.

Bill started us off with three canapés. First up was a soup which turned out to be the beloved choko (also known as chayote, vegetable pear or mango squash) as the main ingredient with onion, garlic and a touch of lemon. It was served with bits of bacon boating about on the top. There were guesses about whether it was cauliflower, potato, et cetera and there was a bit of reminiscing about choko vines growing over the old outhouse toilet and as kids being threatened with choko if you didn’t behave. It was excellent.

The next starter was in Italian herb focaccia topped with olives. There’s not much more to say and looking at the photograph will give you more information. The focaccia was cooked in the REX kitchen and was delicious.

The final starter was a zucchini, fetta and dill tart. The zucchini had been mandolined thinly and the slices looked attractive and tasted even better.

There was no shortage of canapes. It was Bill!

The main. As had already been declared on the function notice we had a deconstructed Reuben. Bill had slow cooked the silverside beef at 110° C for about five hours and had glazed the meat with orange marmalade and whole-grain mustard. The sweet-and-sour taste on the outside of the meat was enticing. The moistness of the silverside varied a little around the table.

Served with the silverside was sauerkraut which was made by Paul Irwin who was originally going to cook on this day. The sauerkraut was surprisingly good to my taste (as I am normally not a fan) as the full-blown traditional sauerkraut I find a little over the top.

Bill had, strangely enough, served a Yorkshire pudding based on Gruyere cheese with the main. The jus topping gave an excellent flavour while the pudd itself was light and tender. Bill being Greek and serving a Yorkshire pudding had a call from the floor saying it could be called Spartan pudding!

The cheese presented by Gary Linnane as the acting Cheesemaster was Fourme d'Ambert, a semi-hard French blue cheese. One of France's oldest cheeses, it dates from as far back as Roman times. It is made from raw cow's milk from the Auvergne region of France, with a distinct, narrow cylindrical shape. It was rich and satisfying. James Hill provided bread for the lunch from Sonoma I recall.

It was announced at the lunch that there will be a new Society trophy for the best accompaniment to a cheese course in honour of our departed long-time Cheesemaster, Ross McDonald. A fitting trophy.

That is relevant as Bill served an accompaniment, pears poached in red wine (Cabernet in this instance) with cloves, cinnamon etc. The presentation was stunning and it tasted exquisite.

Pewsey Vale Riesling 2006 - A delightful aged Riesling still with plenty of acid and fruit to carry it off the back palate.  Deep straw colour, by no means oxidised, but as a 16-year-old, certainly a drink now proposition.

Wines by KT Peglidis Vineyard Watervale Riesling 2015 – Lovely lime juice with pure and focused finish. It has a long future but just now the Pewsey Vale was preferred by most.

Wynns Black Label Cabernet Sauvignon 2012 – Another great Black Lable from Sue Hodder. Tannins are smoothening out but it still has luscious fruit. Such good QPR. I preferred it to the companion Yalumba Cabernet. Under screwcap.

Yalumba The Cigar Cabernet Sauvignon 2012 – Slightly overcome by tannins with diminished fruit. Under cork and probably suffering for it. Something was not right.

Dr H Thanisch Kabinett Riesling 2016 - Very pure apple, minerals with some herb at the back. Medium dry. A wonderful wine with the cheese at only 10.5% alcohol. We, as a whole, do not drink enough of this type of wine.

Wairau River Reserve Pinot 2010 – This Marlborough wine is a brooding big boy. Sometimes we forget that good Burgundy is not light and ethereal but big and tannic. Hard to believe that is 12 years old. A food wine with dark fruits. Where is it going? No idea but pretty good drinking now for its age and provenance.