A gratifying 43 members and guests turned up to appreciate the culinary efforts of James Hill, supported by Paul Thorne in the kitchen, and by Paul Ferman on wines, the same James Hill on cheese and Spencer Ferrier with coffee ( and tea).

Canapes were a cultural mix, with a well-flavoured and nicely textured duck consommé served in mini plastic cups , and an Eastern-influenced prawn mix, hotted up with chili, black garlic and palm sugar, on ceramic spoons. The customary eclectic selection of wines accompanied these, featuring a variety of whites both still and sparkling, a couple of reds and the Lustau amontillado sherry

The main course was worth the wait resulting from a doneness problem, and the deboned and flattened chicken marylands came to the table cooked through but still moist and juicy. The chicken was braised in a liquid built on star anise, chili, kecap manis and ginger which served as a sprightly slightly sweet but not too spicy sauce over a bed of nicely done jasmine rice and accompanied by an Asian dish of green beans with ginger, shallots and some sliced garlic which had been a little burned in the cooking. Served with this dish (as distinct from matching it) were a 2008 Stoney Rise Riesling from the Tamar Valley in Tasmania, soft with inviting powder puff fragrance but no match for the spice in the food, and a 2006 Epsilon Barossa shiraz, with a surprising balance of fruit and wood, but still hot (14.5%) and awkward with the sweet and salt subtleties of the sauce.

We almost ended our tryst with Asia when the cheese arrived; a Comte Gruyere from the Franche-Comte region of France and presenting in perfect condition with a cream-coloured, slightly elastic curd showing sweet milk and nutty overtones. It went well with the vestigial Asian influence of a sweet-pickled thinly sliced cucumber and daikon salad. They were well matched this time by the wines: a2008 Craggy Range shiraz from Hawkes Bay in NZ, showing top cool climate fruit in excellent balance with fine tannins, a touch of class; and 2000 Stepping Stone Cabernet from Coonawarra, a budget-range wine which has lasted extremely well, with Coonawarra softness in the fruit, although starting to tire.

For coffee, Spencer showed us a rare bean from Panama, picked and left for 12 months before roasting and showing high acid content with a touch of licorice on the palate, and a long and refreshing finish. It was well set off by a drop of Lustau Pedro Ximenes liqueur sherry, green in colour with wonderful complex sweet flavours akin to a top Aussie tokay (or whatever it's called now). Also on offer was an Earl Grey tea, dry and fragrant with bergamot (orange rind) oil

Some good comments, including contributions from the ladies, to complement good food and wine

The 1st lunch of winter saw the return to the kitchen of the maestro, Ted Davis, with the faithful Gareth Evans in support. On a beautiful day, it was fowl on the plate, starting with some Davis duck rillettes, moist and flavoursome on small sourdough bread rounds and a sweet and succulent pate, made from the livers of the same bird, with plenty of brandy and orange juice to kick it along and similarly served. The aperitif wines were a 2009 Ocean 8 Verve chardonnay from the Mornington Peninsular, fresh with light fruit against the fat of the entrees, a 2010 Swinging Bridge cabernet from Orange with cool climate characters which stood up to the food well, and the Lustau amontillado, big, nutty and a joy to drink.

The birds were downsized for the main course, boned quails stuffed with a forcemeat of pork, breadcrumbs and 4-spice mix, with a (shelled) quail egg buried in there too. The birds were roasted well after being basted with truffled butter, and served on a bed of pureed cauliflower and kohlrabi with an intense madeira sauce made on the quail bones with added chicken necks and sundry herbs. It was a deceptively simple meal of quality and we hope Ted can be coaxed out of retirement at least one more time. The accompanying wines were a 2009 Marlborough pinot from Wairau River, sweet and simple but quite good with the food; and a 2000 Willow Bridge shiraz from Geographe in WA, big with hot fruit and 14.5% alcohol, but coming into balance after 14 years, although it tended to overpower the food.

Nostalgia reigned with the cheese and salad: a perfect dolce latte gorgonzola, sometimes referred to as the Society cheese, and a salad of good ol' iceberg lettuce dressed generously with olive oil and a big hit of vinegar. The wines were a bit more up to date, featuring an unlabelled wine which turned out to be the 2007 Rosemount Balmoral shiraz rich and soft in tannins although needing more time to integrate. Also on the table was the 1998 Wynns black label Coonawarra cabernet, showing typical cassis notes but a little extracted, mature and current drinking.

The coffee was an El Vulcan bean from Guatemala showing a full, slightly bitter mouthfeel but short on the finish.

Acclaimed as the tasting of the year, Paul Ferman put on a vertical look at Penfolds Bin 389 cabernet shiraz. He was ably abetted by Josef Condrau, assisted by Greg Sproule, in the kitchen, starting with some canapés: whisky marinated smoked salmon with crème fraiche and shaved fennel on porcelain spoons, crème fraiche topped by fresh and tangy salmon roe on crackers and some wild boar terrine on crackers with the obligatory cornichon on top. To wash them down, there was a 2002 Tyrrells Vat 4 semillon, still young fresh and lemon zesty, great with the canapés.

The accompanying food was in keeping, Norman-style Black Kurobata pork neck marinated in calvados and served with a sauce based on the marinade, apples and cream. Some terrific crackling was in evidence and the accompaniment was a melange of cabbage, potato, shallot, leek and speck, based on the traditional Irish colcannon.

Naturally the cheese was Swiss, a semi-hard Blumencase cheese in the appenzeller style, with good texture, grassy notes on the palate and a pleasing sweet caramel finish. It went well with the tasting wines, and with the two grape varieties which came with it.

Special mention should be made of the Infinity sourdough bread, a baguette with the main course and a walnut loaf which complemented the cheese well.

The coffee took us to Sumatra, the beans providing strong flavour with a good clean acid finish, a fitting end to a great testing of a classic Aussie brand. Hats off to the Winemaster.

Another first timer appeared in the kitchen, this week Peter Black, with a helping hand from Paul Thorne.

Proceedings kicked off with two varieties of terrine – chicken liver and pork, and chicken breast and pork – enriched with sundry herbs and brandy and served on sourdough half rounds topped with a piece of cornichon, or with a sweet and luscious onion jam. The flavours were good, if subdued, and very moreish. The aperitif wine was a 2000 Alkoomi Riesling from Frankland River in WA, still holding but showing traces of oxidation on the nose and past its best. Also on offer were a choice of the fino and amontillado sherries from Lustau, always reliable.

For his main course, Peter followed the sous vide trend, with beef ribs vacuum packed and cooked for about 72 hours on low heat. There was a surprising variation in doneness for a process designed to give uniformity, but in the main the meat was soft and (almost) falling off the bone. A rich mushroom sauce, with lots of wine and stock, was poured over, and served with a creamy mash enlivened with celeriac, and crunchy brussels sprouts producing the usual division of opinion. The accompanying wines were both in the big and bold SA mould, a 2008 HardysardysH HRB/D646 cabernet/shiraz from McLaren Vale and Clare, and an Olivers Taranga Shiraz from McLaren Vale. The former showed good hot fruit (14%) but an extractive hardness on the palate, whilst the straight shiraz, although a hefty 15% alcohol, was in excellent balance with sweet fruit but drying tannins and a clean finish.

The cheese, showing soft buttery texture and a lifting mushroom-flavoured blue mould, turned out to be a Shadows of Blue from Tarago River in Victoria, made in the soft blue castello style and very well received, as was a tasty salad of rocket, sliced pear and shaved fennel in a plentiful bath of vinaigrette. The matching wines were a 2010 La Zona barbera from N Victoria, lighter in style and with dry tannins but needing a bit more time to settle down, and a great old 2000 Ingoldby McLaren Vale shiraz, with developed sweet fruit in harmonious balance with soft tannins and good residual acid.

We welcomed Gary Linnane in his first stint as chef of the day, with some pretty experienced assistance from James Hill and James Healey. First up, a brace of fine terrines which Gary admitted came from Victor Churchill: a rabbit and a duck, in each case topped by a savoury jam on firm but not hard toasts. Light yet flavoursome, and well accompanied by the Wine Society 2002 Tasmanian Riesling. This was a mature developed wine with an attractive nose showing minimal kerosene and a fresh but deep palate. Also on offer was the Lustau fino sherry, predictably tart but rich with briny notes on the nose and palate 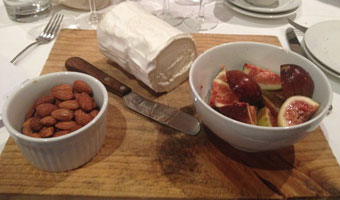 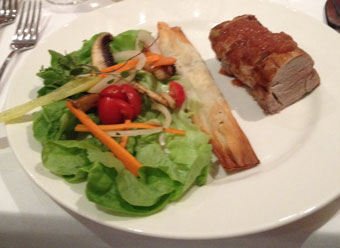 It was back to normal with our weekly lunches, but that didn't stop 42 members and guests from rolling up to sample some good comforting food from Gary Patterson, assisted by James Tinslay.

Boldly going where no wine master has gone before, Paul Ferman put on a tasting of 6 reds, all masked. We were told that there were 5 local and 1 overseas, 4 shiraz, 1 cabernet and 1 blend, with 3 SA, 1 WA and 1NSW, and left to fend for ourselves. Small wonder that there was a spread of opinion on which was which, although a surprising consensus on quality, if not provenance.

However, chef Greg Sproule, assisted by Nick Reynolds, rose to the occasion, as did our man of wine, A goodly crowd of about 48 members and guests were on hand, many of whom had not booked. Paul Ferman.

Nick Reynolds kitted up for the final cook off for 2013 COTY, and he should be a shoo-in if the comments from the large crowd of about 48 are any guide.

This time around, it was Bruce Thomas flying solo in the kitchen to land a great re-enactment of last year’s duck breast, with suitable homage to his deceased namesake